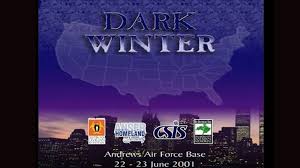 A 2001 war game simulation of a biowarfare attack in the United States carries eerie similarities to the current coronavirus pandemic and lockdown that devastated the planet.

During the final Trump-Biden debate, Biden made a reference to an upcoming “dark winter” in the United States, referring to the possibility of another coronavirus outbreak this winter.

As a result, the internet exploded with searches of the term “dark winter”.

The Dark Winter exercise,(Link) run by the Johns Hopkins Center for Civilian Biodefense, Center for Strategic and International Studies, ANSER, & the Memorial Institute for the Prevention of Terrorism, was an extensive simulation that attempted to envision federal government response to a nationwide smallpox outbreak.

The Dark Winter exercise portrayed a fictional scenario depicting a covert smallpox attack on U.S. citizens. The scenario is set in 3 successive National Security Council (NSC) meetings which take place over 2 weeks. Former senior government officials played the roles of NSC members; media representatives were among the observers and played journalists during the mock press conferences. The exercise was held at Andrews Air Force Base, Washington, DC

The exercise, complete with a 44-page script(LINK), simulated several days of the outbreak, throughout which the government scrambled to stop the spread, including developing a new vaccine and distributing it.

Drawing parallels to what we are currently living thru, the fictional outbreak, while not a coronavirus, was instead a smallpox pandemic- which started in Southwest Asia.

Their scenario included a shortage of the vaccine and violence as the result, with the eventual implementation of martial law.

They created a “fake news” news broadcast of the pandemic

Here are the findings discovered from the simulation drill. With a presidential candidate actually saying the phrase ‘dark winter’ and the fact that we are heading into the winter, with a vaccine for covid around the corner; this obscure simulation is worth looking into and it is quite intriguing: