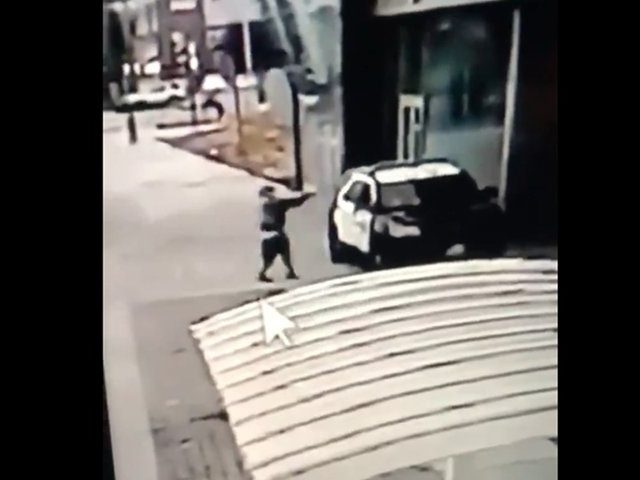 AP: The shooting of two Los Angeles County sheriff’s deputies in an apparent ambush prompted a manhunt for the shooter, reaction from the president and protests outside the hospital where the wounded deputies were being treated Saturday night in California.

The 31-year-old female deputy and 24-year-old male deputy both underwent surgery Saturday evening, Sheriff Alex Villanueva said in a late-night news conference. Both graduated from the academy 14 months ago, he said.

Update: The gunman walked up on the deputies and opened fire without warning or provocation. pic.twitter.com/cBQjyKkoxJ

The deputies were shot while sitting in their patrol car at a Metro rail station and were able to radio for help, the sheriff said. Villanueva, whose department has come under fire during recent protests over racial unrest, expressed frustration over anti-police sentiment as he urged people to pray for the officers.

“It pisses me off. It dismays me at the same time,” he said.

The department shared video of the shooting in a Twitter post showing a person open fire through the passenger-side window of the patrol car.

“The gunman walked up on the deputies and opened fire without warning or provocation,” the department stated.

The video sparked thousands of reactions, including from President Donald Trump, who responded, “Animals that must be hit hard!”

Breitbart reported on an apparent  witness who live streamed his excited reaction to the aftermath of the attempted murder.  They appear to be celebrating.

The witness excitedly recapped the attempted murder in his best Ebonics.

Social media responded by noting that instead of helping the victims, the witnesses instead happily streamed their reaction. The celebration of possible murder is a sign of a decaying society, empathy & a general sense of humanity completely stripped away.

One must wonder if the 4 month long crusade against police and America in general from the BLM movement and their allies in Hollywood, corporate media and the media had anything to do with the reaction by these live-streamers and maybe the shooter’s , motive  himself.  Anti-police “dog-whistles” perhaps?

A man in the background shouted approvingly: “This is the only justice we’re going to get!”

He then showed patrol cars arriving, sirens wailing and lights flashing, continuing his commentary as before.

A.P reported: Protesters gathered outside the emergency room at the hospital where the injured deputies were being treated.

The BLM radicals screamed out “death to the police” , taunting the cops and telling them they hope they die.

Black Lives Matter activists confront law enforcement at Los Angeles hospital where wounded officers were taken after they were shot.

“To their family: I hope they f**king die.”
pic.twitter.com/bPgatQZYRI

This  ABC L.A  report indicated the BLM radicals were provoking police near the hospital and tried to get into actually  the emergency room

“To the protesters blocking the entrance & exit of the HOSPITAL EMERGENCY ROOM yelling “We hope they die” referring to 2 LA Sheriff’s ambushed today in #Compton: DO NOT BLOCK EMERGENCY ENTRIES & EXITS TO THE HOSPITAL,” the sheriff’s department tweeted. “People’s lives are at stake when ambulances can’t get through.”.

Capt. Kent Wegener said officers were blanketing the area in search of a suspect seen on the video opening fire with a pistol.

“We have a very, very generic description,” he said.

The incident happened around 7 p.m. a short distance from the Compton sheriff’s station.

UPDATE : The Los Angeles Times reports that both deputies are “recovering,” following surgery after the ambush attack.