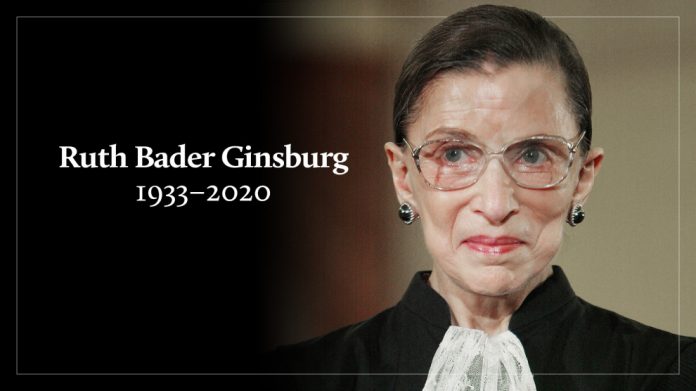 The battle over appointing the successor to SCOTUS justice Ruth Bader Ginsburg, who passed away yesterday at the age of 87 after a years-long battle with cancer, has begun

Senator McConnell  has called for a Senate vote for the successor to Ginsburg.

“Americans reelected our majority in 2016 and expanded it in 2018 because we pledged to work with President Trump and support his agenda, particularly his outstanding appointments to the federal judiciary. Once again, we will keep our promise,” McConnell said.

Meanwhile Democrats will point to the Senate Majority leader’s statements made immediately after the death of Antonin Scalia in February 2016. McConnell announced that – in a departure from decades of precedent – he wouldn’t call Obama’s nominee, Merrick Garland, for a vote, and that the next SCOTUS justice would instead be left to the next president.  This turned out to be an important political move at the time, as Hillary Clinton was defeated and Trump and the GOP got to vote for Neil Gorsuch, who was confirmed to the Supreme Court in April 2017

“The American people should have a voice in the selection of their next Supreme Court Justice. Therefore, this vacancy should not be filled until we have a new president”

Schumer also pointed to a statement Senator Lindsey Graham made in 2016, when the Republican was taking a position against the Senate vote for Obama’s pick Garland. Schumer Tweeted Graham stating:

“I want you to use my words against me. If there’s a Republican president in 2016 and a vacancy occurs in the last year of the first term, you can say Lindsey Graham said let’s let the next president, whoever it might be, make that nomination.”

“I want you to use my words against me. If there’s a Republican president in 2016 and a vacancy occurs in the last year of the first term, you can say Lindsey Graham said let’s let the next president, whoever it might be, make that nomination." pic.twitter.com/quD1K5j9pz

Senator Graham came out swinging Saturday morning against delaying the SCOTUS  vote on Twitter, even though he is going against his former stance.  He sited former  Democratic Senate Majority Leader,  Harry Reid changing  the rules to allow a simple majority vote for Circuit Court( Nuclear Option) in 2013  and more importantly Senator Graham Tweeted:  Chuck Schumer and his friends in the liberal media conspired to destroy the life of Brett Kavanaugh and hold that Supreme Court seat open.

Graham stated this all in a series of Tweets.

The two biggest changes regarding the Senate and judicial confirmations that have occurred in the last decade have come from Democrats.

In light of these two events, I will support President @realDonaldTrump in any effort to move forward regarding the recent vacancy created by the passing of Justice Ginsburg.

With less than  2 months to the election,  Ginsberg’s death is about to take this race to the White House to a new level of intrigue and political struggle.

Cuomo’s contentious Appearance on The View, Blames Trump for Every COVID Death in USA