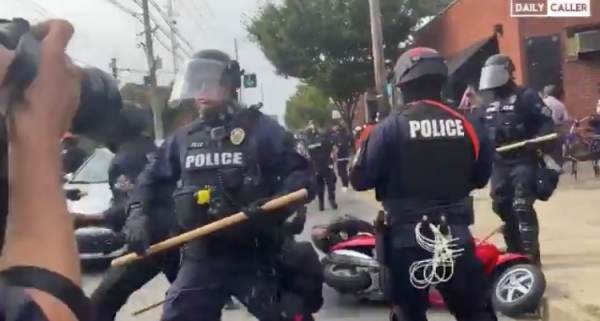 AP reported:  A Kentucky grand jury brought no charges against Louisville police for the killing of Breonna Taylor during a drug raid gone wrong, with prosecutors saying Wednesday that two officers who fired their weapons at the Black woman were justified in using force to protect themselves.

The only charges brought by the grand jury were three counts of wanton endangerment against fired Officer Brett Hankison for shooting into Taylor’s neighbors’ homes during the raid on the night of March 13. The FBI is still investigating potential violations of federal law in the case.

Wanton endangerment is a Class D felony, punishable by one to five years in prison.

The deciding factor in the decision; AG Daniel Cameron stated  evidence shows that officers both knocked and announced their presence at the apartment. The officers’ statements about their announcement are corroborated by an independent witness.

Do not expect this to be mentioned in the press any longer.

Meanwhile within seconds of the announcements the BLM protests were ready to commence.

Louisville: After unlawful assembly was called after a fire was started on a justice building

Police then came out in formation and rioters fled and began throwing objects at them pic.twitter.com/XNk2PzeS7A

Police then responded to shut the un lawful assembly down

Once they did, rioters began whining and asking why

Louisville: A group of rioters attempted to hide from police in the grass near a highway underpass

They were quickly found out pic.twitter.com/BxcOBMy8BQ

Kentucky AG Daniel Cameron says that the night #BreonnaTaylor died, police did knock and announce themselves before Breonna’s boyfriend shot at them. This fact was verified by an independent witness to the events who lived nearby. pic.twitter.com/0ipTvVYv7r

A pair of videos shared to social media shows protesters unloaded shields and signs from a U-Haul truck. It is unclear who rented the truck. One shield read “BLM” in red, while another one had the phrase, “Protect Black Women.”

Unloading the riot shields from the Uhaul #Louisville #BreonnaTaylor pic.twitter.com/F9KqzRB5lM

On the ground in Louisville, Ky. for @townhallcom and the protesting crowd just heard the charges the grand jury announced for the Breonna Taylor case. They are not happy at all, some people are crying. pic.twitter.com/DwGcYKyha4

“We didn’t get it, burn it down!” The crowd continues to grow out here in Louisville this afternoon #Louisville #BreonnaTaylor pic.twitter.com/m4nHrbPvJC

Protesters have organized a full front line now as they move through the streets #Louisville #BreonnaTaylor pic.twitter.com/WHmiwVM2DU

Fists up as the crowd pauses before marching west through Louisville #Louisville #BreonnaTaylor pic.twitter.com/AOnFuRrvHF

Tensions building up in #Louisville pic.twitter.com/JM8WqchgoM

A woman implores the protesters to keep going. They’ve already been marching for an hour and a half, and show no signs of stopping #Louisville #BreonnaTaylor pic.twitter.com/5WdjinpwVs

Buildings are being targeted as are people filming. The situation is getting more tense. With the first business, a man quickly walked inside and locked the door as someone confronted him: pic.twitter.com/J8O6dPvei4

The crowd meets a line of police officers who are preventing them from moving forward pic.twitter.com/QqZ0Lvf0ib