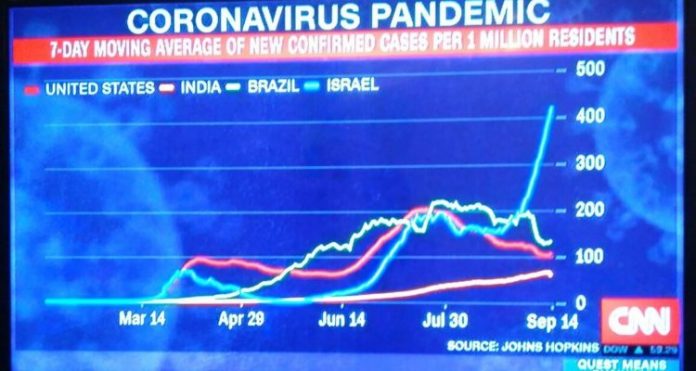 The head of the intensive care unit at a major hospital that shot past its capacity Monday attacked the Israeli public for not following health instructions, thereby helping the spread of the coronavirus and driving up the death toll.

Professor Sharon Einav, director of the ICU at Jerusalem’s Shaare Zedek Medical Center, posted a long diatribe on her Facebook page Sunday venting her frustration after Israel’s infection rate became the worst in the world. On Monday, while Shaare Zedek was at 82 percent capacity, its coronavirus ward was at 123 percent occupancy, meaning patients were on beds in the aisles.

Einav warned the general public to expect dire consequences from the skyrocketing spread of the coronavirus in Israel that has seen a sharp spike in the death toll and in the number of patients hospitalized in serious condition.

“I can no longer remain silent,” Einav wrote, referring to the biblical story of Abraham sacrificing his son Isaac that was recited Sunday during Rosh Hashana Jewish New Year prayers.

“The binding is a story of sacrifice, and in this country there are currently two groups of people that you have all raised on the altar, but unlike Abraham, you do not remove the knife from their throats,” Einav wrote.

She slammed the younger generation for ignoring health guidelines after news reports showed several hundred people gathering on the beach in Tel Aviv over the weekend, most of them not wearing masks, in defiance of government regulations prohibiting large groups.

“We owe this second period of grace to all the idiots who knew better,” she posted on Facebook last week as Israel headed into a second national lockdown.

“People refuse to cooperate in very simple things, and it can cost lives,” Einav said, adding that older people were staying home out of fear of catching the virus from younger people who refuse to wear masks or maintain social distancing.

“They are afraid of you, the young,” she said, slamming those who glibly passed off the pandemic as Darwin’s “survival of the fittest.”

Israel’s previous lockdown in the spring proved successful, winning the country praise for its handling of the virus. (World Israel News)