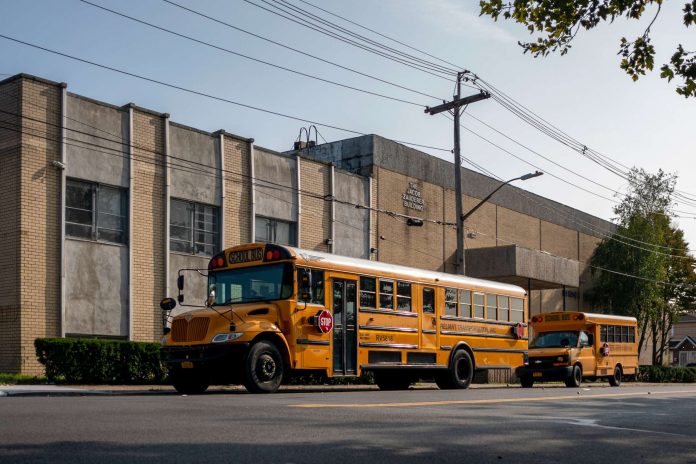 Reuven Blau and Greg B. Smith, THE CITY

This article was originally published
on Sep 20 at 9:35pm EDT
by THE CITY

The future does not look so bright for Sheindy Weichman’s 14-year-old son as he enters his first year of high school at a traditional yeshiva in Brooklyn where, she says, her child isn’t getting instruction in any secular subjects.

“No math, no history, no geography, no science. No nothing,” said Weichman, 33. “The one thing they do have is a gym.”

So it goes five years after Weichman and several other parents of yeshiva students filed a complaint with the city Department of Education charging that more than two dozen Hasidic Jewish schools across Brooklyn were cheating thousands of kids by failing to provide an education that includes the menu of secular classes required by state law.

New York City school officials wound up slow-walking the investigation of the parents’ complaint, in part because Mayor Bill de Blasio delayed release of the findings to help him win support in Albany for mayoral control of schools, city probers found.

An examination by THE CITY found that the DOE’s long-promised vow to make yeshivas violating state education requirements start teaching the subjects they’re supposed to is once again falling behind.

The latest missed marks: a DOE demand that all the schools produce by this past January a “high-level” timeline of when state-mandated instruction would be in place, and finish meetings with city education officials by June.

Neither of these actions took place by deadline. The DOE, citing the coronavirus pandemic, says it only began reaching out to meet with officials from yeshivas in June.

The lack of progress is made clear in letters sent earlier this year to Schools Chancellor Richard Carranza and obtained by THE CITY under the Freedom of Information Law.

In March, a lawyer for Weichman wrote a nine-page letter to Carranza detailing her son’s experiences at Mosdos Chasidei Skver, a yeshiva in Williamsburg. The child, identified in the missives as E.F., attended Mosdos from elementary school through the last school year.

This year, he began attending another school, Yeshiva Ketana of Bobov 45 in Canarsie, where Weichman says he continues to face a lack of secular instruction that will impede his ability to pursue a college education and a professional career.

Neither school responded to THE CITY’s requests for comment.

Weichman’s attorney, Katherine Wentworth-Ping of Quinn Emanuel, fired off a letter to Carranza, noting that Mosdos offered no Regents’-level courses and could not produce proof that any of its teachers were board certified.

Mosdos is not registered with the state. Schools that are not registered are precluded from administering Regents exams and awarding diplomas, state education department officials said.

The letter noted that after E.F.’s mother and the other parents filed their initial complaint in July 2015, a years-long struggle began to get the DOE to make Mosdos Chasidei and the other schools teach their children secular subjects.

The mother was “deeply concerned about her decreased ability to slow the deleterious effects of non-equivalent instruction,” according to the letter.

Weichman was, at the time, in the midst of divorce proceedings and had repeatedly petitioned the court to move E.F. to a different school. For years, her estranged husband objected to the transfer and the judge in the case declined her request, the letter states.

She says she was granted only one meeting with DOE officials in 2016, with no further communication about the status of her request to investigate E.F.’s school.

As the years passed, Weichman became increasingly concerned her son was growing up without the tools he would need to succeed as an adult.

“To deny children an education is an abuse of power and it’s child abuse,” she told THE CITY. “My kid was eight or nine years old when this first started. Now he’s 14. He lost out on his entire elementary school education.”

Weichman has hired after-school tutors to teach her son some of the secular subjects he’s missed.

Weichman stressed that she “values” Torah study, but believes it needs to be supplemented with a basic secular education.

“But what really makes me sad and angry is the fact that nothing else gets that dedication and that’s not okay,” Weichman said. “If you really want to dedicate your learning to one specific area, you get to do that after you are 18.”

In August 2018, Weichman learned via news reports that the city Department of Education was working “to collaborate with the affected individuals and organizations to improve the quality of education in non-public schools.” She says no one from DOE had sought her input despite her earlier complaint.

She also learned that 15 schools — including Mosdos Chasidei — had refused to allow DOE inspectors into their schools.

Throughout this time, the group of concerned parents and students who’d filed the original 2015 complaint publicly charged that de Blasio was dragging his feet on the investigation so he could maintain a positive relationship with the Orthodox Jewish community.

The group filed a separate complaint with the city Department of Investigation, even as de Blasio insisted the yeshiva probe was proceeding apace.

In December 2019, DOI released a report stating that de Blasio had been aware that the investigation had been slowed down, in part to help him gain support in Albany for an extension of mayoral control of the schools.

Shortly after that, Carranza finally made public his letter to the state Department of Education explaining what his agency had found: 26 of 28 of the yeshivas named in the original complaint were still not in compliance with state education requirements. Mosdos Chasidei was on that list.

Nine months later, little has changed. In his December letter, Carranza vowed to get the cited yeshivas to provide DOE with a “high-level timeline for next steps” by Jan. 15 and meet with all the schools by the end of June.

Neither promise was kept. Miranda Barbot, a schools spokesperson, confirmed in an email to THE CITY Wednesday that DOE was unable to even begin pursuing meetings with the schools until June, due to the coronavirus pandemic.

“In June, we began reaching out to schools again and fully intend to continue our inquiry,” she wrote. “All students deserve a high-quality education, and we made progress on our inquiry before the governor issued an executive order closing all schools in New York City.”

According to attorney Wentworth-Ping, the damage to E.F. had already been done.

“Today four and a half years since (E.F.’s mother) lodged her complaint on behalf of E.F., (she) has been provided with no evidence indicating progress at E.F.’s school,” Wentworth-Ping wrote to Carranza. “Now that E.F. has reached the age of 13, his secular studies have come to a complete halt. This is not progress — it is a backslide.”

Referring to DOI’s finding that de Blasio used the yeshiva investigation to leverage mayoral control in Albany, Wentworth-Ping wrote, “Childhood education is not something to be traded on in exchange for power and influence, and those in power abandon the children of our city when they engage in such conduct.”

On April 28, Bernadette Fitzgerald, the DOE official Carranza assigned to deal with the recalcitrant yeshivas, responded via a letter that made no mention of de Blasio’s use of the investigation for political purposes. Instead, Fitzgerald blamed the advent of the coronavirus in March for the lack of progress.

And she returned to the language DOE has used from the start of the investigation, writing: “The DOE’s hope is that collaboration with and progress by the schools will continue.”

The attorney for E.F.’s mother responded by letter to Fitzgerald May 24 by questioning why progress in fixing the school’s inadequacies during the pandemic couldn’t still be accomplished when the school had apparently continued to operate with in-class instruction during a time when the city had ordered all schools shut down.

“The point is even more critical for schools that have chosen to open during the pandemic in direct contravention of the governor and the mayor’s orders,” Wentworth-Ping wrote.

In her June 8 response, Fitzgerald repeated that DOE is back to “working with the schools involved, including Mosdos Chasidei Skver, to improve the secular instruction provided to students.”

She added, “I do not believe that a telephone conversation would be useful at this time.”