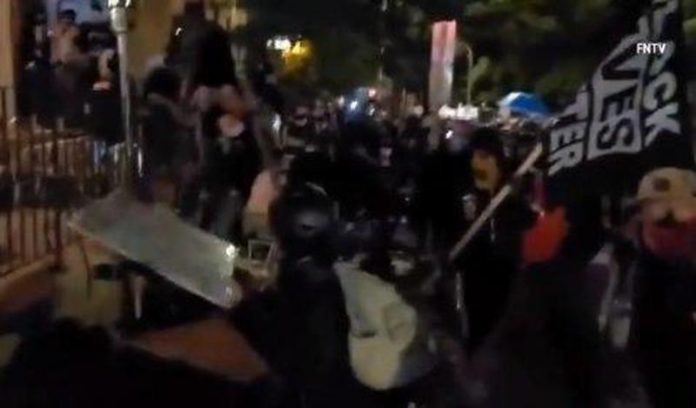 AP reported: The death of Daniel Prude after a confrontation with police sparked a third night of demonstrations in New York’s third-largest city, with protesters demanding more accountability for how it happened and legislation to change how authorities respond to mental health emergencies.

Advocates for such legislation say Prude’s death and the actions of seven now-suspended Rochester police officers — including one who covered the Black man’s head with a “spit hood” during the March encounter — demonstrate how police are ill-equipped to deal with people suffering mental problems.

Daniel Prude was running in the streets naked  in Rochester in late March , when the unfortunate encounter occurred, some reports indicated Prude was intoxicated with the powerful hallucinogenic drug PCP

AP reported: Friday night’s protest resulted in 11 arrests, police said. As they had the night before, officers doused activists at police headquarters with a chemical spray to drive them from barricades around the building.

One independent journalist  who was on-hand to document the scene tweeted video of a gang of  BLM radicals barging into a restaurant, terrifying diners, flipping chairs and screaming at people. Apparently, they did this to multiple establishments across town.

#HappeningNow the protesters in Rochester NY are “shutting down restaurants”, tables are broken, people running off scared #rochesterprotests pic.twitter.com/oxmlZp526w

Breitbart reported: The demonstration continued to descend into chaos prompting authorities to declare it a riot and deploy various munitions, including pepper spray. Protesters reportedly hurled “projectiles and incendiary devices” at officers, three of whom were hospitalized for injuries including cuts and burns to their neck

Fireworks thrown at officers in Rochester New York during the protest. #ROC pic.twitter.com/1z649UsSNg

Windows were smashed at two Starbucks, five banks and a Duane Reade in Lower Manhattan, causing an estimated $100,000 in damage.

At the scene, police recovered two stun guns, smoke grenades, and tools to aid in “burglary and graffiti”, according to the New York Post.  All those arrested were charged with rioting, while some were hit with weapons charges over the “tools” mentioned above.