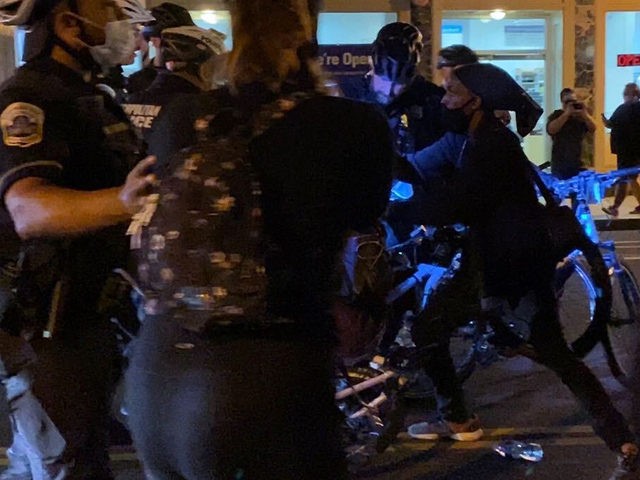 (TJV News) The Grand Jury decision involving the fate of the Louisville police officers involved with the botched no-knock warrant which resulted in Breonna Taylor’s death, brought a new round of chaotic protests, across the nation. None of the officers were charged with Taylor’s death, after it was determined that police identified themselves as they knocked on Taylor’s apartment door, during a no-knock warrant, they knocked 3 times, as per witnesses before breaking down the door, resulting in Taylor’s boyfriend firing at the police. Kenneth Walker, fired a gun at the officers he said he  believed to be intruders, who fired over 20 shots in turn. Ms. Taylor was shot five times, according to her death certificate.

On September 15, the city of Louisville agreed to pay Taylor’s family $12 million and reform police practices, including ending no-knock warrants  On September 23, a state grand jury indicted officer Hankison not for Taylor’s death, but on three counts of wanton endangerment for endangering a neighbor with his shots. The two other officers involved in the raid were not indicted

These circumstances lead to the following scenes across America. The protests in Kentucky, including the shooting of 2 officers was heavily reported on, however the events on many other major cities were basically only reported on by independent journalists on the ground. TJV rounded up the actual chaos of these protestrs, which most of the media will not show you !

Seattle: Antifa rioters assault a cop who was knocked to the ground from his bicycle. A person then uses a metal bat to strike him on the head. This is in the middle of the former “CHAZ.” #SeattleRiots #antifa #BLM pic.twitter.com/34cTbUoE9U

Seattle: Rioter lays in the street to try and stop the police from moving in on bicycles. One officer rides over him anyway. #AntifaRiots #BLM pic.twitter.com/zQHC2wXJrP

Black woman screaming at black police officer: “Shame on you! You should be out here with us!” Dude next to her holding skateboard later gets arrested. pic.twitter.com/dHtfVMLbyR

HAPPENING NOW- protest moves to I-94 in St Paul pic.twitter.com/RQAwwGGKrY

DALLAS: “f*ck you” a few white BLM protesters yell at a black woman in her car

As she tries to pass through an intersection they are blocking

They continue to hurl expletives as traffic builds up pic.twitter.com/aBlRSnM3Ng

NOW: Protesters are marching down Centre Avenue in Pittsburgh following a Kentucky grand jury’s decision in the case of Breonna Taylor. pic.twitter.com/oaymRXscmv

~10k protesters in all lanes of Manhattan Bridge, pedestrian and traffic lanes. pic.twitter.com/cMtViRk0zs

“No cops, no KKK, no fascist USA,” the crowd chants to live drums. pic.twitter.com/Yxo5BJZddY

Large crowd of protesters are out in downtown Dallas demonstrating in response to the Breonna Taylor case in Kentucky. | @utashorthorn pic.twitter.com/KtOZMUbO5b