By ANDREW SELSKY and SARA CLINE(AP)

(AP) — Diminishing winds and rising humidity helped firefighters battling deadly blazes in Oregon and California, but with dozens of people still missing, authorities in both states feared that the receding flames could reveal many more dead across the blackened landscape.

Nine people, including a 16-year-old boy, have been confirmed dead in California since lightning-caused fires that started weeks ago fused into a monster blaze that largely destroyed Berry Creek, a tiny hamlet in the Sierra Nevada foothills northeast of San Francisco.

Oregon authorities have not released an exact death count, but at least eight fatalities were reported from the blazes that have taken a toll from one end of the state to the other. Gov. Kate Brown said Friday that tens of thousands of people had been forced to flee their homes.

Two large blazes threatened to merge near the most populated part of Oregon, including the suburbs of Portland.

More than 40,000 Oregonians have been evacuated and about 500,000 are in different levels of evacuation zones, having been told to leave or to prepare to do so, Brown said. The governor dialed back a statement late Thursday by the state Office of Emergency Management that said a half-million people had been ordered to evacuate statewide.

Scores of people were missing in Jackson County in the southern area of the state and in Marion County east of Salem, the state capital, Brown told a news conference. Authorities also announced that a man had been arrested on two counts of arson in connection with a fire in southern Oregon.

Searchers found two victims of the so-called Beachie Creek fire near Salem. A 1-year-old boy was killed in wildfires in Washington, authorities said.

Amid the smoke and flame, the Oregon fire marshal was placed on paid leave Saturday. Oregon State Police Superintendent Travis Hampton said the crisis demanded an urgent response, which required a leadership change. Fire Marshal Jim Walker was replaced on an acting basis by the chief deputy fire marshal.

Improved weather helped efforts on the ground after days of high winds, heat and low humidity. “The wind laid down quite a bit for us yesterday,” said Stefan Myers of the state’s fire information team.

Almost 500 firefighters were working on the fires near Portland, which were just a few miles (kilometers) apart. The rugged terrain between them limited efforts to contain the flames, Myers said. If the fires merge, they could generate enough heat to send embers thousands of feet into the air, potentially igniting other areas.

More than 1,500 square miles (3,880 square kilometers) have burned in Oregon during recent days, nearly double the size of a typical year and an area larger than Rhode Island, authorities said.

The land burned in just the past five days amounted to the state’s second-worst fire season, after 2015, Washington Gov. Jay Inslee noted. He called the blazes “climate fires” rather than wildfires.

“This is not an act of God,” Inslee said. “This has happened because we have changed the climate.”

Jackson County Sheriff Nathan Sickler said a 41-year-old man was jailed on two charges of arson for a fire that started Tuesday in the Phoenix area in southern Oregon. The fire that burned hundreds of homes had an ignition point in Ashland, near a spot where a man was found dead. Authorities said the man denied starting the fire.

Officials were working to locate about 50 missing people, Sickler said.

California crews made progress Friday in chopping or bulldozing brush-free lines to control the North Complex fire. Gusting winds that whipped up the flames days earlier eased while smoke blocked out the sun and lowered previously scorching temperatures. Saturday’s high temperature was expected to top out at 80 degrees or less.

Nearly 15,000 firefighters were battling 28 major wildfires across California, although 24 were sparked Thursday and quickly contained.

The North Complex remained the deadliest this year. Butte County Sheriff Kory Honea had said 10 bodies were found but on Friday lowered the figure. Remains found in a burned storage shed turned out to be from a resin model of a human skeleton that was used by an anthropology student, he said.

A search continued for 19 missing people.

Back in Oregon, evacuation centers were open across the state. 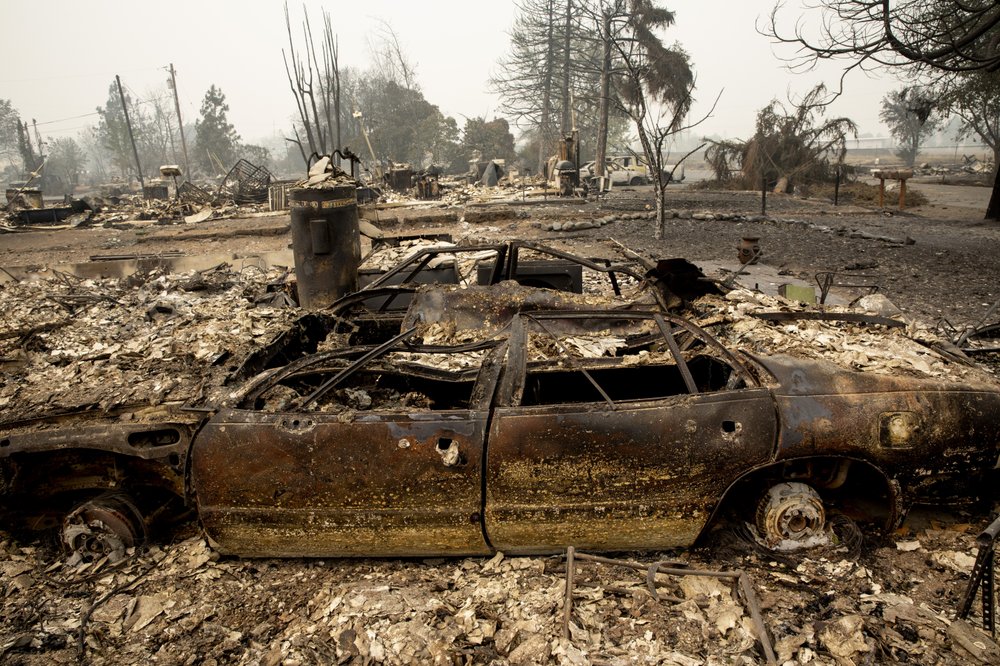 A neighborhood destroyed by fire is seen as wildfires devastate the region in Talent, Ore. (AP Photo/Paula Bronstein)

Kim Carbaugh fled her home Monday in Lyons with her husband, two children and two horses.

“When we were driving away and I could see actual fire, the red and orange flames, at the time I didn’t feel scared, I had so much adrenaline — we just had to leave,” she said Friday from the livestock stables of an evacuation center at the state fairgrounds in Salem.

The site also housed hundreds of animals — dogs, llamas, horses, pigs, cows and chickens. Many people chose to camp or stay in RVs. 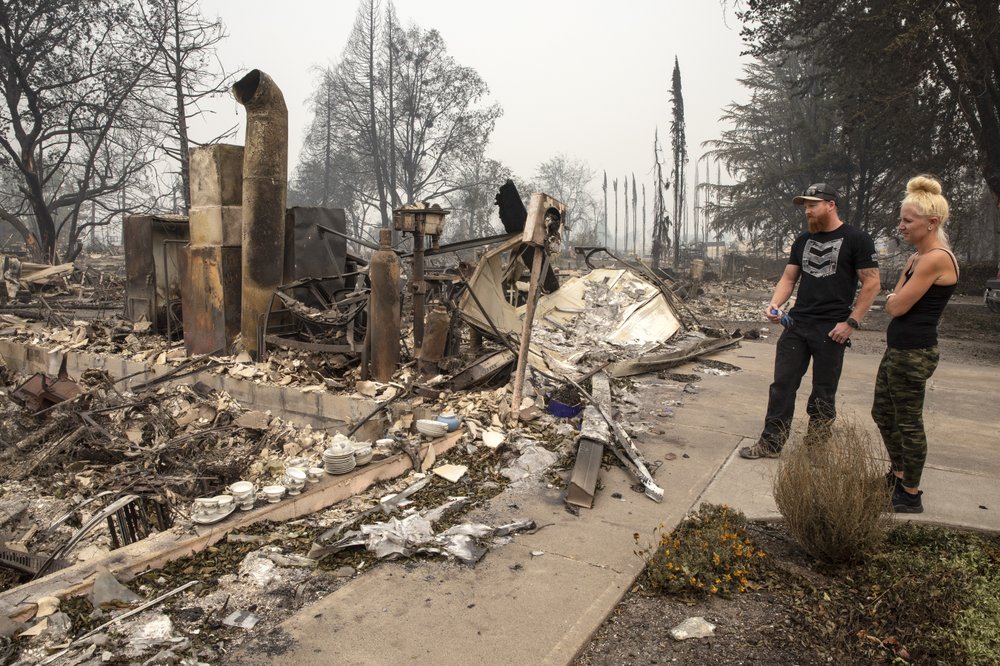 Charles Legg sat at a table with his 22-month-old son, who cooed and played with a dinosaur puzzle.

“He’s OK,” Legg said. “He’s not eating as normal. He knows something is going on.”