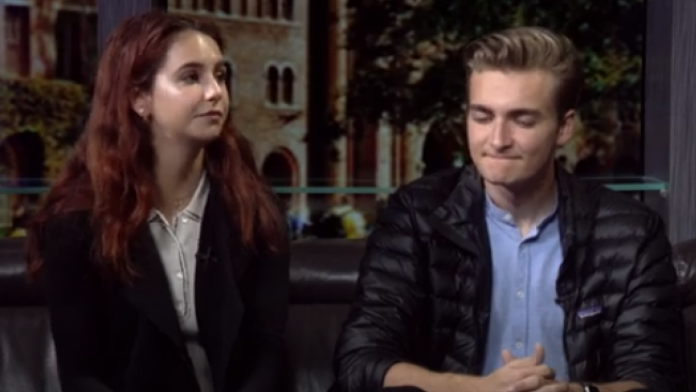 This is a pattern and a growing trend.

The resignation of Undergraduate Student Government Vice President Rose Ritch on Wednesday is a scandal in its own right.

In her letter of resignation, Ritch wrote that she was “harassed and pressured for weeks by my fellow students because they opposed one of my identities,” namely, that she openly identifies as a Zionist and is a supporter of Israel’s right to exist as a Jewish state.

Because of this identity, Ritch wrote, she was “accused by a group of students of being unsuitable as a student leader.”

But wait, it gets worse.

“I have been told that my support for Israel has made me complicit in racism, and that, by association, I am racist.”

According to the Daily Trojan, the fact that Ritch chose not to respond to Instagram posts accusing her of “racial misconduct” demonstrated her “complicity.” The student behind the drive to impeach Ritch, Abeer Tijani, believes “it is important to acknowledge the dissatisfaction of Palestinian students and amplify their voices on campus,”

There are a number of other stories here.

1. If certain blocs can’t win an election legitimately, they’ll stage a coup by accusing the winners of racism on the thinnest of pretexts. Truman Fritz, the former president and Ritch’s running mate, was forced to resign because he was accused of racial microaggressions like asking black students to talk to their people and help him get elected.

2. There’s a pattern to oust not only Jewish, but any students tolerant of Israel out of student government.

If Ritch is removed from office, Washington, who is a Black Israeli-American, would have succeeded her. A post from Washington’s private Instagram proclaiming herself as a Zionist began circulating.

So this is a purge and a coup. And the USC president has nothing meaningful to say to address this.

Folt wrote, “In her heartbreaking resignation letter, Rose described the intense pressure and toxic conditions that led to her decision – specifically the anti-Semitic attacks on her character and the online harassment she endured because of her Jewish and Zionist identities. She also challenged all of us to do better in aligning our actions with our stated desire to have a campus culture that is truly inclusive and respectful of racial and religious diversity, and of different cultural backgrounds and beliefs.

Folt acknowledged that the university still wrestles “with a history of anti-Semitism” and noted that anti-Semitism has been on the rise on college campuses throughout the country. She stated that USC will be launching its “Stronger Than Hate” program through the USC Shoah Foundation.

“It represents the work of many of our university leaders — including students, staff, and faculty — who have come together to support and amplify our collective struggle against hate,” Folt wrote. “Through meaningful exhibitions, programs, and workshops, this initiative is designed to help foster a campus culture of connection and compassion that empowers us to listen, learn, heal, and dream together. We hope that as we listen to each other, we can move beyond stereotyped beliefs that lead to implicit and explicit biases, and instead foster a respectful and supportive campus culture.”

It’s a nice letter and meaningless. An exhibition isn’t fixing this. It’s meant to buy off Jewish organizations.

As long as student government is a zone where no one who supports Israel is allowed to serve at USC, the university is an effectively antisemitic environment.

If you wear a sombrero on Cinco De Mayo, the university will crack down on you. On the other hand if you organize a bullying campaign against a Jewish student, the university will express generalized discomfort, without dealing with anyone specifically, and hold an exhibition.

It’s Time to Stop Counting Jews in the Cabinet

Back to the Endless Wars: US Military Convoy Enters Northeast Syria