With the election less than 100 days away, the Trump for Victory Fund is holding several high-profile fundraisers, including a weekend at the Hamptons, and a more private event in NJ.

Page 6 reported that Donald Trump Jr.’s girlfriend Kimberly Guilfoyle, will be hosting a major fundraiser in the Hamptons over the weekend.

The Hampton’s events include a $580,600-per-couple fund-raiser on Saturday that will be attended by President Trump.

Singles can get in the event, organized by the Trump Victory Fund, for $250,000. There will be other events starting Thursday with a $2,800-per-person reception and a $50,000-per-couple dinner, reports NBC.

Guilfoyle, tested positive for COVID after a party in Bridgehampton Mansion, evidently she is fully recovered.

Meanwhile JTA reported :  President Donald Trump will attend a private fundraiser at the New Jersey home of a close friend who died of the coronavirus in April, Stanley Chera. 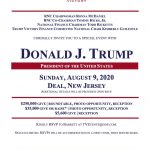 TVV reported in April: Stanley Chera, a pillar of the Syrian Jewish Community died on April 11, 2020 at the age of 78, The Real Deal reported.  As he laid in a medically induced coma for nearly three weeks at New York Presbyterian Medical Center hundreds were praying for his speedy recovery from the unrelenting coronavirus.  Those who knew the billionaire real estate developer were quick to heap praise on the business genius whose life revolved around giving charity and spending time with his family.  He was a close personal friend of both Donald Trump and the Kushners

JTA reported: The news website Yeshiva World News first reported about the location of the Aug. 9 fundraiser and included an image of the invitation.

Details of where the fundraiser will be held are provided upon RSVP, according to the invitation. Yeshiva World News identified the location as the Chera home.

Donations range from $250,000 to meet Trump at a roundtable, have a photo op and attend a reception with the president to $5,600 to attend the reception.

“When you send a friend to the hospital, and you call up to find out how is he doing — it happened to me, where he goes to the hospital, he says goodbye,” Trump said during a White House briefing at the height of the coronavirus pandemic in April, referring to Chera. “He’s sort of a tough guy. A little older, a little heavier than he would like to be, frankly. And you call up the next day: ‘How’s he doing?’ And he is in a coma? This is not the flu.”

Trump referred to Chera after he died at another press conference

Meanwhile, the fundraising should be intense and more frequent as Trump heads into a much different kind of presidential race in 2020, one hindered by the pandemic, where Trump finds himself behind in the polls.