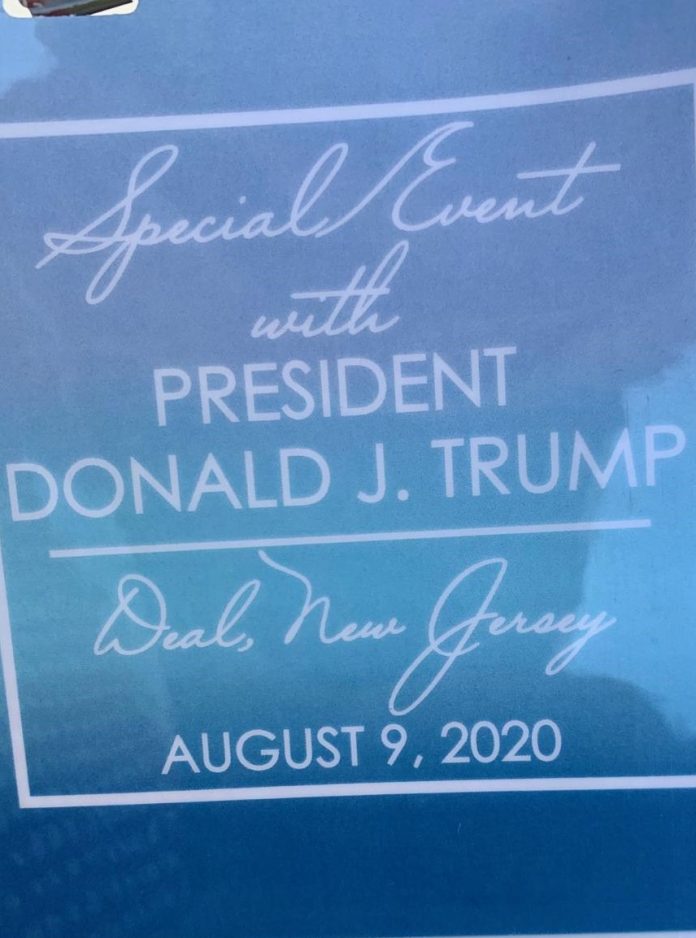 Despite the naysayers and the plethora of critics, it appears that President Trump does indeed have support for his re-election bid and lots of it.

Over the weekend, the commander and chief attended several big-money fundraisers in the posh Hamptons and out on the Jersey Shore.

On Sunday afternoon, throngs of Trump supporters and opponents squared off on a day filled with sunshine before the president arrived to raise money for his re-election campaign at the Jersey Shore home of the late Stanley Chera, of blessed memory, who died in April at the age of 77, of the coronavirus.

According to an internal invitation sent to likely donors, the contribution required in ordered to meet the President at a round-table was $250,000. Less expensive options included photo opportunities and a reception at $35,000, and a smaller option was $5,600.

The Chera home is located in the Elberon section of Long Branch on the Jersey Shore, north of Deal. All attendees at the fundraiser were tested for Covid-19 prior to entering  the premises.

Besides being a close friend of Trump’s and a colleague of his in the New York City real estate world, Chera was one of the most prominent members of the Sephardic Jewish communities in Brooklyn, New York and Deal, New Jersey.

According to the Center for Responsive Politics, Chera gave $25,000 in 2016 to Trump’s campaign and the Republican National Committee, and $124,800 last year to the RNC, which is supporting the president’s re-election.

On March 29, the president spoke of his special friendship with Chera at the White House.

“I had a friend who went to a hospital the other day,” Trump said at a press briefing with his coronavirus task force. “He’s a little older, and he’s heavy, but he’s tough person. And he went to the hospital, and a day later, he’s in a coma. I call: ‘How’s he doing?’ ‘Sir, he’s in a coma. He’s unconscious.’ He’s not doing well. The speed and the viciousness, especially if it gets the right person, it’s horrible. It’s really horrible.”

🇺🇸 — EXCLUSIVE VIDEO: Crowd at the Trump Victory fundraiser in Deal, NJ, waiting for president Trump to walk in. pic.twitter.com/exayKWTXrX

Trump added that Chera was like a “young boy” in terms of how thrilled he was that his friend became president and how much he supported the policy agenda of the Trump administration. On previous occasions, he spoke glowingly of Chera as a friend and a very successful real estate entrepreneur. Their friendship spanned many decades and the president was visibly distressed when he learned of Chera’s passing.

President Trump had previously attended a fundraiser at the Chera residence when Trump was running in 2016. Chera had also hosted a Veterans Day event where the president addressed the nation in New York City in November of 2019.

Speaking of the enduring friendship that Trump had with his father at the Sunday fundraiser was Haim Chera, one of the three adult sons of Stanley Chera. The younger Chera expressed his appreciation to Trump for inquiring with Chera’s family on his father’s progress while in the hospital, as he waged a courageous battle against the dreaded coronavirus. He also noted that despite how busy President Trump was with helping America in the battle against the “invisible enemy” that emanated from China, he took the time to find out how his family was doing in the aftermath of his passing.

He said that his Trump gave his father “his greatest excitement” when he entered the race for the nation’s highest elective office in 2015 and never gave up hope that he would win. Haim told the president that he will always be indebted to him for making his father so happy and relayed a story that occurred at the beginning of the 2016 campaign. He said that he had attended a lunch with some of New York’s biggest bankers and business people and one of them asked his father sarcastically if Trump had any chance of making it when he was competing with 17 other candidates at the start of the Republican primaries in the fall of 2015. Haim said that his father quickly responded, “100 percent chance of winning.”

Speaking to the Jewish Voice, former New Jersey GOP US Senate Candidate and attorney Stuart Meissner , who was a guest at the Sunday fundraiser said: “It was a very impressive event and I was glad to be amongst Trump’s most fervent supporters.  Trump spoke for over an hour touching on many of the key issues particularly those important to the Jewish community.  As usual, his speech was filled with humor, passion and vision. ” Meissner added that, “All were relaxed in the beautiful setting on the water in Long Branch as all were tested for Covid before entering and the White House along with the President’s staff did a fantastic job to ensure a pleasant afternoon.”

“I was really impressed with the enthusiasm of the crowd of supporters at the event. All were chanting four more years over and over again during the President’s hour long speech where he  discussed the economy,  Iran, Jerusalem, and China and contrasted what Sleepy Joe would do on all those issues,” Meissner said.

The fundraiser was for Trump’s re-election campaign, the Republican National Committee and 22 state parties, though not New Jersey.

On August 7th, however, Trump did post a tweet about the massive aid that the White House has given to New Jersey in the face of challenges due to the coronavirus. 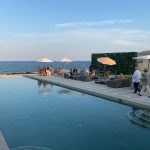 According to White House pool reports, Trump supporters, gathered to watch the Marine One helicopter carrying the president land at a local school, prior to the fundraiser. The anti-Trump contingent attempted to march to the fundraiser but were stopped by a roadblock.

The president’s supporters carried Trump flags. Not too far way, protesters flew the “Baby Trump” balloon that has been used to taunt the president at previous demonstrations.

CNBC reported that billionaire former hedge fund manager John Paulson hosted Trump at his home in swanky Southampton, New York, at a Saturday fundraiser, according to people with direct knowledge of the matter. Tickets for the dinner event were priced up to $500,000 per couple, an invitation had said. 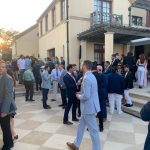 In early July, it was reported that Guilfoyle has tested positive for the coronavirus, but apparently she is no longer in quarantine.  She was diagnosed after attending campaign events in Montana, and she and Don, Jr, then drove out of South Dakota before Trump’s Fourth of July Mount Rushmore speech, according to a Vanity Fair article.

On Thursday, CNBC reported that she and Trump Jr.  attended an event that cost $2,800/person for the reception and up to $50,000/couple for the dinner.

The NY Post reported that singles also had the opportunity to meet the president for a mere $250,000 at the Saturday fundraiser. 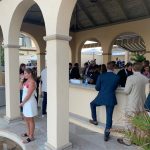 CNN reported that according to the website Virtual Globetrotting, which tracks the residences of celebrities, Paulson’s property was once known as the “Old Trees.” It’s described on the website as a “gated estate of 10.4 acres — a private park, really — with a 15,000-square-foot 1911 Georgian mansion, guesthouse, barn, pool, and tennis court overlooking Lake Agawam, in the heart of Southampton Village.”

The Hamptons is the traditional summer home of wealthy business executives, celebrities of all stripes and high profile personalities from around the world. Because of the dangers emanating from the coronavirus pandemic, the state of New York allows social gatherings of only up to 50 people, which would make it difficult for fundraisers to proceed.

New York State Governor Andrew Cuomo has continued to call on people across the state to continue to maintain social distancing and if that is not possible, them to wear masks in public. 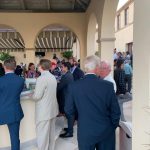 Republican officials recently told CNBC that all fundraiser attendees must test negative for Covid-19 on the day of the event, complete a wellness questionnaire and pass a temperature screening.

Paulson, who has hosted events for Trump in the past has a reported net worth of over $4 billion. The Wall Street Journal reported last month that Paulson, who used to run Paulson & Co., recently returned money to his investors and turned the business into a private investment firm only for his family.

Published reports indicate that the Trump campaign expects to raise $15 million for the Trump Victory committee, a joint fundraising operation between the campaign and the Republican National Committee.

Federal Election Commission records show that Paulson has given over $330,000 to the committee in the 2020 election cycle, as was reported by CNBC.

The Trump campaign and the RNC have said that in the month of July they pulled in more money than did their opponent. In July, the claim, they raised $165 million for Trump’s war chest as opposed to the $140 million that was raised for the Biden campaign.

Public polling shows Biden ahead of Trump by just over six points, according a Real Clear Politics polling average.