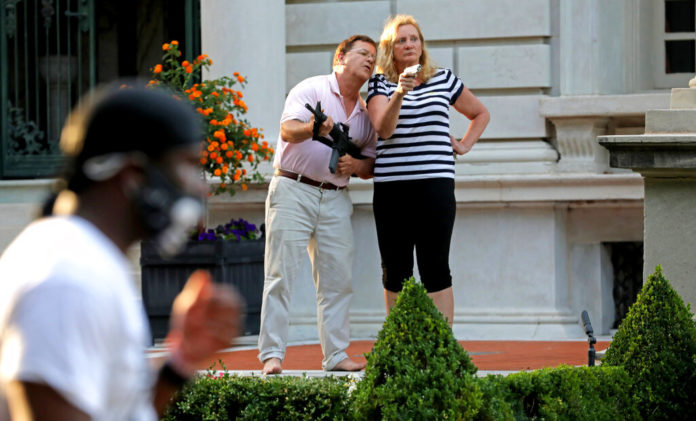 Liberal billionaire George Soros is redoubling his efforts to reelect the St. Louis prosecutor who brought felony charges against a couple for pointing guns at Black Lives Matter protesters after they broke through the couple’s front gates.

Gardner has generated controversy during her first four years in office. She hired a private investigator to look into allegations against former Missouri governor Eric Greitens (R.), who was charged with felony invasion of privacy, instead of working with police. Gardner’s investigator lied under oath and the prosecutor’s conduct set off a separate probe into the handling of the case.

Soros made the donation as part of his ongoing efforts to elect far-left prosecutors across the country in a bid to overhaul the criminal justice system. Earlier this year, the financier sent large sums into Chicago backing state’s attorney Kim Foxx, who drew national attention after her office dropped charges against Jussie Smollett, the actor who staged a hate crime and attributed it to Trump supporters. The liberal billionaire has spent millions supporting far-left candidates in California, Florida, Pennsylvania, Texas, Virginia, and elsewhere.

The St. Louis prosecutor brought felony charges against Mark and Patricia McCloskey on July 20 for pointing guns at a mob of Black Lives Matter protesters who broke onto their private property. Some members of the crowd engaged in a shouting match with the McCloskeys but no one was injured during the exchange and no shots were fired.

The ordeal was captured on camera and quickly went viral, placing the McCloskeys at the center of a political firestorm. Supporters of the Black Lives Matter movement—for which Soros pledged $220 million in funding—criticized the couple’s actions, while others defended them as acts of self-defense. The couple has appeared on Fox News multiple times since the altercation and appeared at a virtual Trump campaign event last month.

Missouri law provides robust legal protections for homeowners who defend their private property with deadly force. Joel Schwartz, the couple’s lawyer, said the McCloskeys were within their rights when they confronted the crowd with their firearms.

The probe into Gardner’s conduct during the Greitens case is still ongoing. The prosecutor hired private investigator William Tisaby, a former FBI agent, to look into the claims against Greitens. After Tisaby was charged with perjury and evidence tampering, the charges against Greitens were dropped. Gardner has called the investigation into her handling of the case a “racially motivated conspiracy.”

“Governor Greitens has been exonerated and is glad to see the truth come to light about the criminal effort to remove him from office in 2018,” Dylan Johnson, spokesman for Greitens, told the Washington Free Beacon. “Now, Kim Gardner must comply with the court order and provide her communications with George Soros, political insiders, and journalists who paid 120K in bribes to witnesses who lied about the Governor.”

Gardner’s campaign did not respond to inquiries on Soros’s cash.