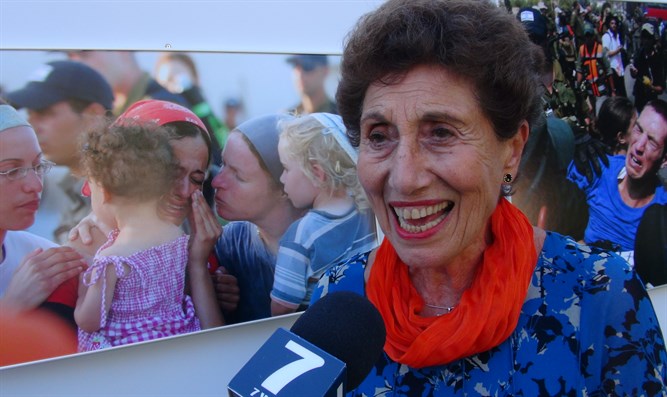 Just the other day as I was reading news reports about the maelstrom of controversy in Israel as well as other reports about burgeoning anti-Semitism throughout the world at large, my thoughts immediately turned to an incredibly valiant woman whom I have had the deepest and most profound respect for, for so many years.

During the unstable and often frightening times in which we live, I think we naturally think of and gravitate to those who not only offer us comfort and solace but who have emulated strength, true courage and sheer tenacity; especially when faced with the onerous challenges that life presents.

So, today I reflect on the life of a dear and caring friend, a colleague in the cause of defending Jewish rights and a woman on the frontlines of supporting the settlement movement in Israel. As the newspaper I was reading slowly slipped from my fingers, I thought of Helen Freedman and what she would be saying about the issues of the day and what wisdom she would offer.

Helen, z’l, has finally succumbed to the serious illness that she had courageously battled for the last two years, She left this world this morning for the World to Come as she takes her place before the Kesay HaKavod.  Before she passed however, nothing ever kept Helen down for long. G-d bless this doughty soul who remained eternally sanguine in a world gone mad.  While she is internationally recognized as a stalwart Jewish and Zionist activist, Helen began her career as a devoted wife, loving mother of four and a spry English teacher at Lawrence High School on Long Island.

Back in 1995, I first met Helen in New York City when she assumed the position of Executive Director of Americans for a Safe Israel (AFSI). And let me tell, you. my life has never been the same. Helen inspired me to reach for the highest of heights and she continued to inspire and motivate me every day.

AFSI was founded in 1970 by Herbert Zweibon, of blessed memory, as an American counterpart to the Land of Israel Movement, asserting Israel’s historic, religious, and legal rights to the land re-claimed in the 1967 war. AFSI has argued consistently that a strong, territorially defensible Israel is essential to U.S. and global security interests in the region, and that the “two-state solution,” would endanger the world, while bringing the dissolution of Israel.

AFSI is dedicated to the premise that a strong Israel is essential to Western interests in the Middle East, and that the Jewish communities in Judea, Samaria and the Golan are the best guarantee against strategic vulnerability, as were the Gush Katif communities.

With her homemade signs that she held aloft and her beloved companion Charlie Bernhaut at her side, Helen was a ubiquitous figure at demonstrations against the Israeli withdrawal from Gush Katif and against the litany of tyrants who sought the destruction of the one and only Jewish state.

Whether it be confronting US presidents, international parliamentarians, leftist Israeli government officials and the likes of Hamas, Hezbollah, the PLO, Turkish President Recep Erdogan, or the cesspool on Manhattan’s east side, known as the United Nations, Helen was there with her cadre of devoted AFSI members and other concerned individuals. Demonstrating, speaking truth to power and never acquiescing. Helen is a sterling paradigm of strength, inner resolve and a woman possessed of a deep and abiding love for her people, the land of Israel and her G-d.

The truth was even though Helen was recently unable to attend demonstrations or to appear as a guest on radio and television programs, or to hold meetings, Helen was always there in spirit and she was cheering us on from her home.

Helen’s great joy was preparing her bi-annual AFSI “Chizuk” missions to Israel. Every autumn and spring. Helen would bring dozens of people to Israel on a tour unlike any other.   Helen labored assiduously to plan the most enlightening trips to settlements in Israel that were under siege or being threatened with destruction.

In the spring of 2012, I had the great honor of joining Helen on one of her Chizuk missions to Israel. For more than a week, Helen never stopped moving. Her palpable enthusiasm was beyond infectious.

From the crack of dawn until well past midnight each day, Helen was leading us to such places as  the Rishon LeTzion Synagogue and Museum, a Golan winery, a visit to a shofar maker, a boatride on the Kinneret, the Yom Hazikaron evening at the Knesset, our visit to Har Herzl on Yom HaZikaron, a tour of Hevron, a visit to the settlement of Nezzer Hazzani, the exploration of the ancient synagogue in the Jordan Valley,  our visit to the Lebanon border, and the Yom HaAtzmaut barbeque at Kidmat Zion, among many other unique locations.

At the settlement of Chavat Gilad, I vividly recall the glowing faces of the community’s children as they enjoyed the brand new state-of-the-art playground that had been built with help of AFSI members and funds from the Israel Independence Fund.

Standing with the children on Chivat Gilad, Helen said, “We’ve seen and heard the pain of our people who live in this region; these amazing people who wage a battle for a Jewish presence in the land of Israel, each and every day. Now, we are with the next generation. These wonderful and precious children who will follow in the footsteps of their parents; who will grow and flourish in these communities. We are very proud to be in a position to provide them with a playground just like other children have.”

What meant such a great deal to Helen was her annual trip to Hevron on Parshas Chaye Sora every autumn. As part of the Chizuk trip, AFSI members would spend Shabbat with families in Hevron; the very city spoken of in this parsha. The city that the Torah tells us was purchased from Ephron the Hittite by Avraham Avinu; the city where the patriarchs and matriarchs are laid to rest; the city where the biblical David established his kingdom before moving it to Jerusalem.

Back in New York, Helen would organize the annual yahrzeit commemoration of renowned revisionist Zionist leader Ze’ev Jabotinsky every summer. Each year, she arranged special speakers who shed light on the magnificent life and glorious legacy of Jabotinsky. A few years ago at Park East Synagogue, Helen had booked former Betar member Ronald J. Edelstein to address the assemblage as well as distinguished author and media personality, Aaron Klein.

In 2014, I distinctly recall that Helen had once again posited herself in the forefront of righteous controversy as she diligently worked with others in organizing a powerful series of demonstrations in front of the Metropolitan Opera House at Lincoln Center to protest performances of the “Death of Klinghoffer”  (an opera by composer John Adams and librettist Alice Goodman about the story of the execution of 69-year old American tourist from New York City, Leon  Kilnghoffer. He was murdered by PLO terrorists in 1985, on the hijacked Achille Lauro cruise ship. The handicapped Kilnghoffer was selected to be murdered because he was a Jew. The terrorists shot him and threw him overboard in his wheelchair)

At the time, Helen said “This patently anti-Semitic opera has no place on any stage in New York. Its lyrics and message smacks of a virulent Jew hatred; the likes of which we have not seen since the days of Hitler. The rights of artistic expression do not include a platform for racism, anti-Semitism and hatred of any group.”

As the years went by Helen could be found at various Jewish organizational fundraising dinners, seminars, meetings at synagogues and just about any Jewish event you could think of. Nothing stopped Helen and nothing ever could – except death.

Helen feared nothing except Hashem and her devotion to His people was truly remarkable on both a collective and personal level.  In the winter of 2013, I was hospitalized and Helen and Charlie shlepped into Brooklyn to visit me and provided me with much needed encouragement and support.

I also remember that the evening before her surgery, rather than staying home and preparing for what could have been a long hospital stay, Helen showed up at a book reading at the iconic Strand Bookstore in Greenwich Village to support her friend and colleague, Dr. Phyllis Chesler who was doing a reading from her latest book, “A Politically Incorrect Feminist.”

Helen, you were in my prayers each day, three times a day as I beseeched Hashem to grant a refuah shleima to Chynka bas Chana. We need you Helen now, more than ever. Looking forward to now seeing you again on the frontlines from your heavenly post. Your precious neshama shall live forever and as we wait for the coming of moshiach tzidkeynu and the final redemption, we look forward to greeting you at techiyas hameisim.

With love and great admiration,