“It’s all about access, Agent Spender,” the Cigarette Smoking Man famously told his son in The X-Files. And that was certainly the case back in May of 2015, as the New York Times trumpeted a feature story with the headline, “New York Real Estate Executive With ‘Access to Politicians’ Is at Center of Scandals.”

Charles C. Dorego was identified this way: “an influential figure in real estate circles whose warm smile and easygoing demeanor could disarm even those with whom he disagreed in an industry famous for its bitter rivalries.”

According to the Real Estate Board of New York’s (REBNY) web site,  Dorego is the Senior Vice President and General Counsel of Glenwood Management Corp., one of the largest and most respected real estate development companies in New York City. He joined Glenwood Management in September 2001 after spending 18 years at the law firm of Stroock & Stroock & Lavan in the real estate department.

Dorego is a member of the Executive Committee and Board of Governors of REBNY, helping set policy and lobbying for various industry causes on all levels of government. Through his involvement on the board of the Real Estate Advisory Board, Dorego is also a trustee of the Local 32BJ pension and welfare benefit funds. He is also a member of the Board of the Downtown Alliance, the business improvement district of lower Manhattan.

The REBNY site also indicates that in addition to his role at Glenwood Management, Dorego is a board member of The Litwin Foundation, helping the Litwin family issue and administer grants for the direct research of treatments for medical illnesses, including Alzheimer’s Disease and Crohn’s Disease, at various major research institutions in New York City and elsewhere.

He is a member of the Board of Trustees of the Waterkeeper Alliance, founded and chaired by Bobby Kennedy, Jr. Having grown up on the far east end of Long Island, Dorego is actively involved in the cause of keeping water clean in the area and elsewhere. He is a 1984 graduate of Brooklyn Law School.

Despite his seemingly impressive curriculum vitae, there was a dark side lurking under the surface of Dorego’s personality.

Dorego somehow found himself embroiled in a corruption scandal that ultimately exacted a heavy price from a pair of famously powerful New York State political leaders: Sheldon Silver, a one-time  Democratic speaker of the State Assembly and Dean G. Skelos, a one-time Republican majority leader in the State Senate.

The story was one that shook the New York real estate industry when it appeared (in fact, the Times ran multiple stories about the affair). In one, it noted that “Mr. Dorego hired an army of lobbyists that eclipsed the contingents from either of real estate’s two most powerful trade groups — the Real Estate Board and the Rent Stabilization Association — ensuring he had the ear of state officials who oversee important housing rules, including a lucrative tax abatement program…”

Skelos was a politician from Long Island, New York, who represented the Ninth District in the New York State Senate from 1985 through 2015. He served as Senate Majority Leader in 2008 and again from 2011 to 2015. As Wikipedia records, “Skelos and his son, Adam Skelos, were arrested and charged with six counts of corruption by U.S. Attorney Preet Bharara in May 2015. The criminal complaint included extortion, fraud, and bribe solicitation charges. Skelos was accused of taking official actions to benefit a small Arizona environmental company, AbTech Industries, and a large New York developer, Glenwood Management, that had financial ties to AbTech. Abtech is a manufacturer of storm-water treatment products in Scottsdale, Arizona.

According to an article that appeared in Newsday in June of 2018 about the retrial of Adam Skelos, Dorego’s testimony on the witness stand seemed to contradict itself. The paper reported that on one day of testimony, Dorego said that he had “felt pressured by Dean Skelos to steer work to Adam Skelos or risk the senator not voting for bills key to Glenwood.”

The Newsday article goes on to say that on another day of testimony Dorego “acknowledged that Dean Skelos’ support for renewal of tax breaks for real estate projects was not contingent on Glenwood giving some of its title insurance work to Adam.”

Earlier in the trial Dorego testified that he steered $20,000 of the company’s title insurance work to Adam and got him a job with AbTech Industries, in which Glenwood executives were large shareholders, according to the Newsday article.

“I was under a lot of pressure to help Adam because of repeated and intense requests from his father,” Dorego said under questioning by prosecutor Thomas McKay. “I was nervous that if we didn’t comply something would happen that would adversely affect.”

As was reported by Newsday, Dorego acknowledged that he stood to benefit financially from Adam Skelos’s job at AbTech as he was to receive a cut of the sales commissions paid to Adam by AbTech and planned to share them with two other Glenwood-linked executives who also had helped secure the younger Skelos’ hiring by AbTech. “I will share my cut with you,” Dorego wrote in a 2012 email to one of the executives.

According to the Newsday article, Dorego told Adam Skelos’s attorney under cross-examination that the  fee agreement was never finalized, despite AbTech eventually winning a $12 million contract from Nassau County with Adam’s help.

“After his arrest, Skelos asserted that he and his son were innocent,” the chronicle continued. “He stepped down from his majority leader post in the Senate a week after his arrest; he had already begun a leave of absence from the law firm of Ruskin Moscou Faltischek. “The criminal complaint against him said he had earned $2.6 million there since 1994, despite apparently doing no actual legal work; he was paid instead for referring clients, some of whom had business before the state.”

The fallout lasted a long time. Just this past January, as reported by The Jewish Voice, the corruption conviction of former New York State Assembly Speaker Sheldon Silver was partially overturned by a federal appeals court. He had been convicted in 2018 of corruption and had received a sentence of seven years for having accepted close to $4 million in illegal monies for which he took official actions on behalf of a cancer researcher and two real estate developers. 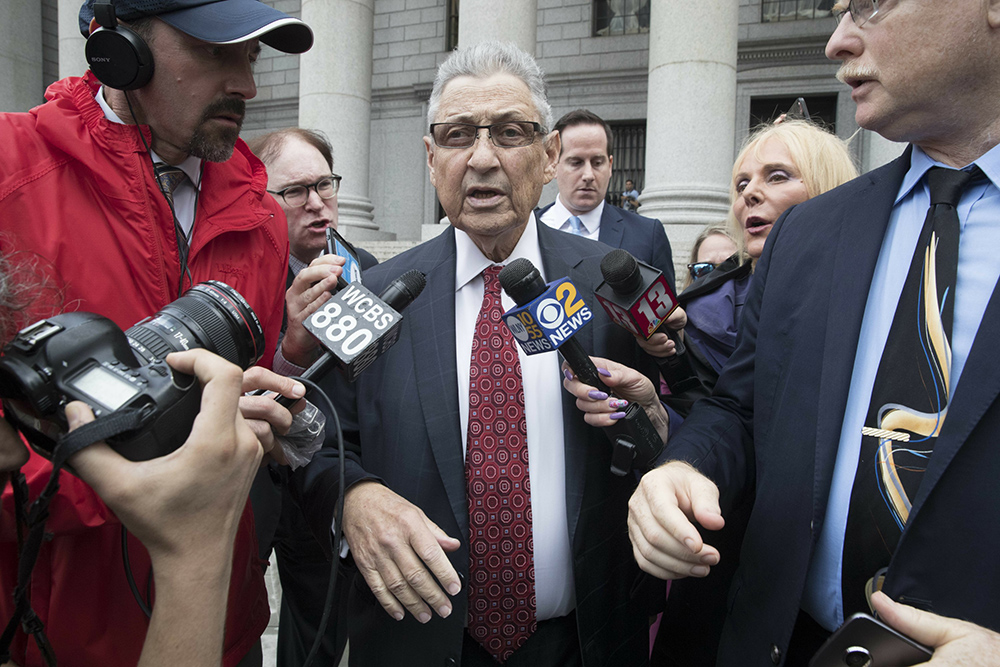 Attorneys representing Silver had made the case that their client’s trial had underscored several legal issues that needed to be examined. A trio of judges agreed that the conviction involving a real estate scheme and a separate money-laundering count deserved to be upheld. The part that was thrown out had to do with the cancer researcher in question.

The trial of Bob Morgan, one of Rochester’s biggest real estate developers, is scheduled to start on Jan. 11, 2021. It should be interesting.

Morgan is facing several federal charges, including money laundering and bank fraud. According to the United States Attorney’s Office in the Western District of New York statement from last year, a federal grand jury returned a 114-count superseding indictment charging Robert Morgan, Frank Giacobbe, Todd Morgan, and Michael Tremiti, with conspiracy to commit wire fraud and bank fraud for their roles in a half billion dollar mortgage fraud scheme.

“The defendants each face various additional charges such as wire and bank fraud, and money laundering,” a release from the state read. “Todd Morgan and Robert Morgan are also charged with wire fraud conspiracy to defraud insurance companies. The charges carry a maximum penalty of 30 years in prison and a fine in the amount of double the loss caused by the crimes, which is currently estimated to exceed $25,000,000.”

According to a November 25, 2019 article on the mpnnow.com web site, not every defendant is charged with every count. Morgan pled not guilty to the charges against him back in May. He was released on $100,000 bond and surrendered his passport.

A lawyer for Todd Morgan, David Rothenberg, told News 10NBC in May that the scheduling of court appearances is a “reflection of the number of volume of documents,” saying at the time there were more than a million documents with “more to come.”

The mpnnow.com web site indicated that Morgan recently sold some of his properties with an estimated worth of $2 billion. The Buffalo News reported that they included  95 properties with 18,000 units in eight states; roughly half of his real estate portfolio.

The paper also reported that the sale freed up $48 million that was paid to a court-appointed receiver to pay off investors in a series of “notes funds” that were managed by Morgan and were the subject of a separate civil lawsuit by the Securities and Exchange Commission. Morgan is currently engaged in settlement talks with the SEC, according to separate letters and court documents in that case.

The Buffalo News added that at his peak, Morgan owned about 180 properties with 36,000 units nationwide – including several thousand in the Buffalo area. Other properties are also being sold one by one, in separate transactions.

This follows the sale of Morgan’s real estate to a company in King of Prussia, Pennsylvania. In addition, a lawsuit filed in the summer by a Rochester developer claims Morgan failed to pay Monroe Capital more than $9 million in loans, according to the mpnnow.com web site.

The Pittsford-based Morgan Communities has been behind numerous area projects including three in Canandaigua — Pinnacle North, CenterPointe Apartments and Townhomes, and The Links at CenterPointe Townhomes — and high-profile projects in Monroe County, including apartments near Dinosaur Bar-B-Que and housing projects near the George Eastman House and the Rochester Museum & Science Center.

During the course of the conspiracy, the state attorney’s office alleged:

Assistant U.S. Attorneys John D. Fabian and Douglas A.C. Penrose, who are handling the case, stated that “according to the superseding indictment, between 2007 and June 2017, the defendants conspired with Kevin Morgan, Patrick Ogiony, Scott Cresswell, and others to fraudulently obtain moneys, funds, credits, assets, securities, and other property from financial institutions such as Arbor Commercial Mortgage, LLC and Berkadia Commercial Mortgage, LLC, and government sponsored enterprises, including Federal Home Loan Mortgage Corporation (Freddie Mac), and the Federal National Mortgage Association (Fannie Mae).”

“To facilitate the conspiracy,” the US attorney’s office continued:

“In the wire fraud conspiracy to defraud insurers,” the release continued, Todd Morgan and Robert Morgan “are accused of conspiring with Kevin Morgan and Scott Cresswell to present false and inflated contracts and invoices for repairs to insurers after damages to properties in Robert Morgan’s real estate portfolio. These properties include the Summerwood Apartments in Merrillville, Indiana; the Eden Square Apartments in Cranberry Township, Pennsylvania; and at thirty-four properties in the Rochester, New York area after a March 2017 windstorm in that area.”

The defendants are also charged with money laundering conspiracy for engaging in monetary transactions in excess of $10,000 using the proceeds of wire fraud and bank fraud, the state said. “The total loss sustained by financial institutions and government sponsored enterprises throughout the mortgage fraud scheme is currently estimated to exceed $25,000,000. The loss resulting from the insurance fraud scheme is currently estimated at approximately $3,000,000.”