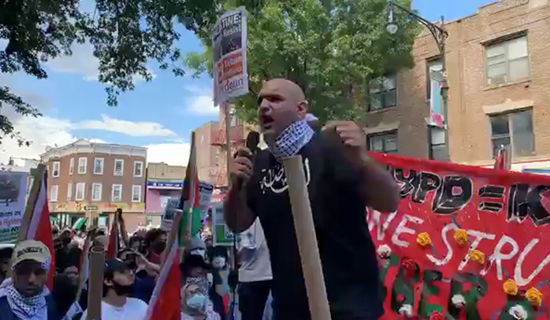 Within Our Lifetime, a NY-based pro-Palestinian organization, organized a “Day of Rage” rally against Israeli plans to annex parts of the West Bank. The event, which was called “No to Annexation,” was held in Brooklyn on July 1, 2020, and the video of the event was uploaded to the organizers’ Facebook page. During the rally, an activist named Jamie from the pro-North Korea Nodutdol organization told the protestors that Palestine will be liberated, that Korea will be unified, and that the U.S. and its puppet governments will be “no more.” Another speaker, Amin Hosain of Decolonize This Place, an anti-gentrification movement, said that the police are the enemy and an impediment to the liberation of Palestine, and he said that when NYPD cop cars burn, a “revolutionary country” is being awakened.

Dequi Kioni Sadiki, wife of former Black Panther Seko Odinga, said that the European Jews who force Palestinians into refugee camps, concentration camps, and killing fields are related to the Europeans who forced Africans into slavery and prison death camps. She added that Palestine must be free like the stolen land of North America, which she referred to as “Turtle Island.” A representative of the Puerto Rican New York Borica Resistance movement said that the police, Israel, and the U.S. government must be abolished. Nerdeen Kiswani from Within Our Lifetime said that Palestinians do not only want to return to Gaza and the West Bank, but that they want all of Palestine. Wrapped in a red flag, a man named Rob from the Party for Socialism and Liberation led the crowd in chant in Arabic: “Death to Israel! Death to America!” In addition, the crowd chanted: “Millions of martyrs are marching to Jerusalem!… The gates of Al-Aqsa are made of iron – its gates will only be opened by a martyr… From Gaza to Minnesota, globalize the Intifada!… Black lives matter!… Not just annexation, not just occupation, fight for liberation – bring the whole thing down!”