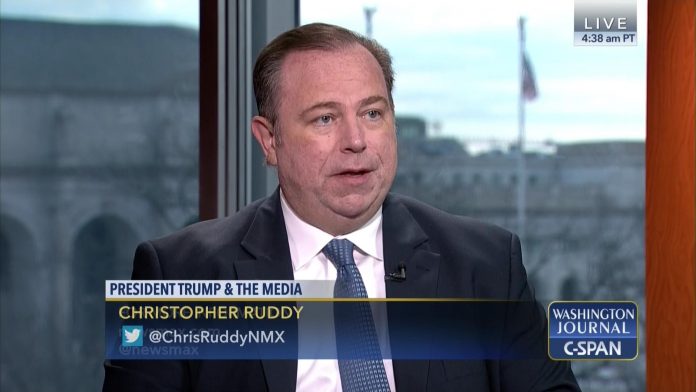 Newsmax TV, a service of the influential Newsmax Media multi-platform news organization, has shown notable growth in the first half of 2020 in terms of audience increase and programming development in the highly competitive OTT arena.

OTT stands for “over-the-top,” the term used for the delivery of film and TV content via the internet, without requiring users to subscribe to a traditional cable or satellite provider.  Some OTT channels require a pay subscription (such as Netflix) and others (such as Newsmax TV) are free.

In the past six months, Newsmax TV began rolling out new programming and has seen ratings triple, becoming one of if not the fastest-growing cable news channel in the US.

As Newsmax TV’s ratings show impressive increases, the company tells TALKERS its insurgent news channel is on course to overtake FOX Business Network (FBN) in viewership by the end of this year.

Newsmax TV has already surpassed established brands like C-SPAN and Bloomberg TV and is closing in on FBN, which sits at 6.5 million in weekly reach.

The network’s weekly household reach went from less than one million in 2019 to more than 3.5 million households, according to most recent Comscore data.

Like FOX, Newsmax offers viewers breaking news with a mix of conservative and liberal opinion/analysis along with conservative-leaning opinion talk shows.

“We have yet to add any prime time shows – and we already have more than half the viewership of FOX Business,” Newsmax CEO Christopher Ruddy tells TALKERS.

Ruddy notes that he expects to overtake FOX Business News this year despite the fact FBN has better channel position, carries the Fox brand, and is carried in more homes than Newsmax.

Ruddy also notes, “Most networks at our stage wouldn’t start with Nielsen because it takes a while for the ratings to calibrate.”

He chuckled at a recent story in The WRAP, a TV trade publication, citing a low prime time number for viewers compared to FOX News Channel.

“They forgot to mention we haven’t launched any prime time shows yet, so it’s hard to make a comparison,” Ruddy says.  “The WRAP story showed me just how worried FOX is about Newsmax.”

Newsmax TV, which is now carried by all major cable operators in the US, believes it has a major competitive advantage over FOX in the OTT arena. Newsmax TV is streamed live and free, while FOX News Channel remains behind a cable subscription pay wall.

Newsmax reports that it had more than five million OTT viewers in June, with an average watch time of almost a half hour across platforms like Roku, YouTube, Xumo, Pluto, Apple TV and others.

“We think OTT will dominate in the years to come,” Ruddy says, “We just re-launched our free app for iPhones and Android and we are getting positive feedback.”

Ruddy tells TALKERS, “Think about it — you’re at an airport, restaurant, traveling in an Uber, wherever — you can tune in and watch Newsmax TV and it’s free!” (Talkers.com)

Kevin Casey is executive editor for TALKERS magazine. He can be emailed at: [email protected]

Trump media partner says it has lined up $1B in capital