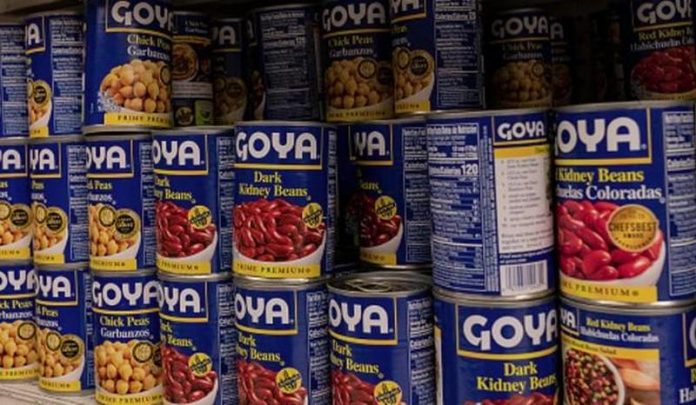 Goya’s CEO joined other Hispanic leaders at the White House on Thursday to take part in the Administration’s “Hispanic Prosperity Initiative” to promote economic and educational efforts.

It is worth noting:  Goya CEO, Bob Unanue, worked with The Obama administration when Obama  launched an eat healthy program for Black and Hispanic Americans.

The “woke” left instantly took to Twitter in outage that Unanue teamed up with Trump for a program benefiting minorities  !

The left would have none of it and instantly demanded a boycott.

Goya Foods, Inc. is an American producer of a brand of foods sold in the United States and many Hispanic countries  It has facilities in different parts of the United States, Puerto Rico, the Dominican Republic and Spain.

In a devastated pandemic economy, the 4000 Goya employees  want their jobs secure and judging by the reaction from the boycott things should be fine, luckily.

This weekend a GoFundMe effort was launched to feed the hungry using only Goya products. It has raised over $43,000 so far.

Casey Harper, who started the GoFundMe, said: “I’m not surprised we have raised so much because people are tired of having to walk on eggshells in political discourse. Also, Americans are fundamentally generous people, so a chance to feed the hungry and stand up to cancel culture was an easy win.”

Radio host Mike Opelka began encouraging people on Twitter to buy $10 worth of Goya products to turn around and donate to their local food bank.

Reports coming from all over the country indicate, that people are deliberately buying more Goya products in spite of the “woke” calls for boycotting the products.

Last Thursday evening, “Goya,” #BoycottGoya and #Goyaway were trending topics on Twitter, after the CEO appeared at the event

On Friday it began when Broadway musical composer, TONY winner and Pulitzer Prize winning writer of “Hamilton” , Lin-Manuel Miranda tweeted in support of boycotting Goya, over President Trump support.  The wealthy, musician and actor, arrogantly did not even think twice of the 4000 worker’s livelihood on the line because of a boycott. Spite and vengeance are higher callings  to individuals like Miranda.

Miranda himself was almost cancelled by the “woke mob” after “Hamilton” was broadcast on Disney . The left began to question if a show about the founding fathers should even exist. Miranda was swiftly attacked by the cancel-culture not only for Hamilton’s subject  but over him originally not supporting BLM in 2013. This Tweet is obviously desperation and a cry to be allowed back into the fold without being cancelled !

We learned to bake bread in this pandemic, we can learn to make our own adobo con pimienta. Bye. https://t.co/qKHNYfkqCq

Socialist radical congresswoman AOC encouraged her supporters  to join in on boycotting Goya as well.  Recklessly, once more ignoring the plight of 4000 workers.  For AOC, it’s even more unacceptable to call for boycotting an American company over petty politics. Lin-Manuel Miranda  is an artist and entertainer, AOC is a lawmaker.

The quick rush to boycott and cancel individuals, and entire corporations over political differences and perspectives is entirely un-American. People need to discuss this chill of censorship which is taking grip of all facets of life.

Oh look, it’s the sound of me Googling “how to make your own Adobo” https://t.co/YOScAcyAnC

Thus far the boycott has been a complete failure. Goya is one of the most generous food companies when it comes to food banks and employs a lot of people. Unfortunately even respecting Trump’s office can get your company boycotted or you can find yourself fired or suspended from college, just for supporting the president,.

It is imprint that boycotts like this fail, the “buy”cott  is winning