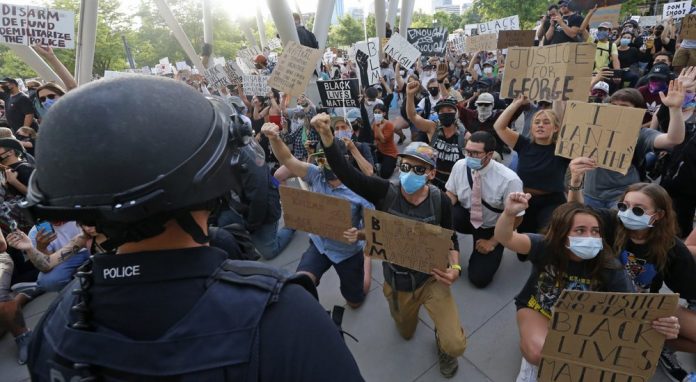 On Sunday night during the height of the chaotic riots, which have rocked the entire nation, an officer pulled out a gun on a protester on Broadway and East 12th St

The following day, de Blasio came out raging and calling for the officer to be fired.

The police union had to point out to the mayor than an  NYPD lieutenant was  struck in the back of the head with a brick thrown by a violent rioter.

After the lieutenant was attacked another cop pulled out his gun to clear the crowd to attend to the injured officer. The Mayor apparently jumped the gun before learning the full story.

The helmet he was wearing likely saved his life.

Talking with the Daily News, the head of the NYPD’s Lieutenant’s Benevolent Association, Lou Turco, said, “If he wasn’t wearing a helmet, he’d be dead or paralyzed. He’s very lucky. The guy came up behind him and threw it at his head on purpose.”

”There was an intent to do serious damage,” he continued. “You don’t do that. You throw it from behind … from a distance, that’s reckless endangerment. You walk up to someone like that? That’s another level.”

Turco said the lieutenant suffered a concussion and is now home after receiving a CAT scan. Below is a local news report on the incident and the social media capture of the chaos

Now we have the full story: this police officer unholstered his weapon only after his supervisor was nearly killed with a brick. #FactsMatter pic.twitter.com/6PzqgI991I

Protesters at Brooklyn “No To Annexation” Rally Chant ‘ Death To America!’, ‘Millions Of Martyrs Are Marching To Jerusalem!’ As Speakers Demand End to...