A Terrorist’s Ties to a Leading Black Lives Matter Group 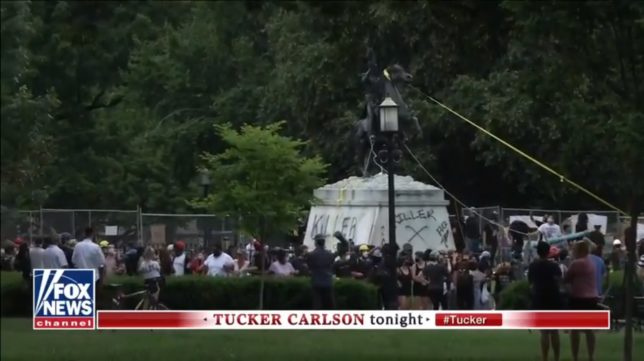 Some conservatives have begun speculating the unrest in American cities—even as late as Monday night in Washington, DC, as “protestors” unsuccessfully worked to tear down a statue of Andrew Jackson and set up an autonomous zone across the street from the White House—may in part be an attempt to affect the upcoming presidential election, with the chaos and violence intended to make it as difficult as possible for Donald Trump to win a second term.

Lending credence to this idea is the fact that at least one board member of Thousand Currents—the group fiscally sponsoring the most organized part of the Black Lives Matter (BLM) movement, who have been involved in most of the activity surrounding the current unrest—tried the same thing almost 40 years ago during Ronald Reagan’s reelection campaign. And it landed her in federal prison for 16 years.

If there were any question whether Black Lives Matter has ideological ties to the Communist terrorists of the 1960s, the story of Susan Rosenberg  should put that issue to bed.

Rosenberg, who started out as a member of the 1960s revolutionary group Weather Underground, graduated into even more violent, and arguably successful, forms of terrorism in the 1970s and 1980s—including bombings at an FBI field office in Staten Island, the Navy Yard Officers’ Club in Washington, DC, and even the U.S. Capitol building, where she damaged a representation of the greatest of the Democrat defenders of slavery, John C. Calhoun. She currently serves as Human and Prisoner Rights Advocate and a Vice Chair of the Board of Directors of Thousand Currents.

As my colleague Robert Stilson explains here, BLM Global Network Foundation has been a fiscally sponsored project of Thousand Currents, a 501(c)(3) nonprofit, since 2016.  That means the BLM group, which runs the BlackLivesMatter.com website, does not have its own IRS tax-exempt status but is operating as a “project” of an organization that does. In the case of 501(c)(3) fiscally sponsored projects, this allows tax-deductible donations to be made to the project.

When “Black Lives Matter” is used to refer to an organization, it typically means the BLM Global Network Foundation that traces its beginnings to “three radical Black organizers — Alicia Garza, Patrisse Cullors, and Opal Tometi.” Cullors recently went viral online when she admitted that she and others in the group were “trained Marxists.”

This leads to confusion when people express their support for “Black Lives,” because they may not realize this organization is ideologically tied—to the point of having Rosenberg on the board of the central group—with trained Marxists with a history of extremism and violence. In fact, Rosenberg was a member of the May 19th Communist Organization (M19). It was, according to this NY Post article from January 2020, “the nation’s only woman-run terror group,” as recounted by William Rosenau in his book Tonight We Bombed the U.S. Capitol.

According to the Post, M19 spent two years engaged in bombings in New York and Washington, DC, that were meant “to cast a cloud over what President Ronald Reagan’s re-election campaign was promising: a sunny, prosperous ‘Morning in America.’ Reagan’s election in 1980 told the remnants of America’s radical left that the country had rejected their call to revolution.”

Middle-class and college-educated, M19’s members shared a disdain for their own whiteness. To prove they weren’t merely “mouthing revolution,” they allied with the Black Liberation Army to break cop-killer Joanne Chesimard (aka Assata Shakur) out of prison in 1979. Two years later they assisted in the notorious Brink’s robbery of 1981, which killed two Nyack police officers and a bank guard.

In an eerily familiar incident on November 7, 1983, they even managed to pose as tourists at the U.S. Capitol building, planting a duffel bag with a bomb under a bench outside the Senate chamber, and cratering a wall  and shattering chandeliers that ultimately damaged a portrait of 19th-century Sen. John C. Calhoun.

Rosenberg and another M19 member, Tim Blunk, were arrested in November 1984 in Cherry Hill, NJ, in front of a storage unit containing 740 pounds of unstable dynamite stolen from a Texas construction firm four years earlier. Rosenberg was also wanted in connection with the 1981 Brink’s robbery. She was never charged in those crimes.

After 16 years in prison, she was released in 2001 when President Bill Clinton commuted her sentence, an act that outraged even the left-leaning New York Times.

Rosenberg turned her New Jersey terrorism trial into a circus, posturing as a political prisoner. At her sentencing, she urged her supporters to continue their war against the United States. (“When we were first captured we said, we’re caught, we’re not defeated, long live the armed struggle. We’d like to take this moment to rededicate ourselves to our revolutionary principles, to our commitment to continue to fight for the defeat of U.S. imperialism.”) She expressed remorse about only one thing: she hadn’t had the courage to shoot it out with the police who’d apprehended her.

Rosenberg has written a book about her exploits in which she justifies her actions this way:

I pursued a path that seemed to me a logical step beyond legal protest: the use of political violence. Did that make me a terrorist? In my mind, then and now, the answer is no. I say this because no act in which I was involved ever had violence against persons as its object or consequence.

Would the “protestors” destroying statues say the same about their behavior over the last several weeks? It’s a fair bet they would. In fact, Nikole Hannah-Jones, creator of the factually erroneous New York Times “1619 Project” proudly claims her project served as inspiration for the current iconoclastic destruction happening around the nation.

The long and the short of Rosenberg’s involvement with Thousand Currents is that numerous Black Lives Matter organizers have ties to extremist movements of the past, and are not some brand new movement simply fighting for marginalized people today. And that the goal of destruction and violence is more of a political tool than a reaction to injustice.