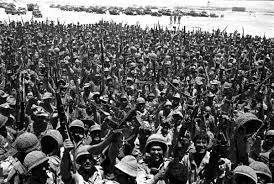 Following the passage of UN resolution 181, which divided the land into a proposed Jewish and Arab state, irregular Arab forces took control of the hills overlooking the road to Jerusalem from the coast and often attacked the road, firing upon convoys bringing supplies, causing heavy losses. Food shortages in Jerusalem were acute. From April 4-20, the Haganah launched Operation Nachshon which succeeded in forcing through convoys of supplies. On May 8, for the next week, the Haganah launched Operation Macabi against Arab irregular troops occupying towns along the road threatening convoys.

Following the establishment of Israel on May 14, the situation facing the supply line to the New City of Jerusalem became even more perilous.

Three days after the exit of British forces on May 15 from the strategically vital area of Latrun and its fortifications, which overlook the road to Jerusalem, it was seized by the Jordanian Arab Legion.

Costly attempts by Jewish forces to regain the strategic site over the next two weeks failed.

Jerusalemites who stayed in their city despite the possibility of internationalization as called for by the 1947 UN partition and braved the threats and severe shortages of supplies over the past six months, now pondered what lay ahead.

The threat was averted and the city was saved by an ingenious and courageous plan to construct a road that would serve as a lifeline. United States Colonel Mickey (David) Marcus, who arrived as a volunteer advisor in January 1948 to assist the war effort, was named to the position of Lieutenant General by Prime Minister David Ben Gurion, helped plan and oversaw the construction of a new connecting road, which would bypass Latrun under control of the Arab Legion.

Marcus named it the Burma Road, which was a 700 mile road between Burma and China, when Burma was a British colony during the Sino-Japanese war of 1937. Over 200,000 Chinese and Burmese workers constructed the road, which was also used by the British during WWII to transport supplies to China.

The classic novel “O Jerusalem” by Larry Collins and Dominique Lapierre, stated, “They (the Israelis) were going to try to achieve with sweat, ingenuity and mechanical skill what they had failed to accomplish with arms — opening a road to Jerusalem.”

The road was sixteen miles long linking Jerusalem and Kibbutz detouring southward from the main road. Soldiers and civilian volunteers labored in the steep Judean hills while within range of Arab mortar. At one point, there was a hill that no jeep could pass so food and supplies were loaded upon shoulders of hundreds of volunteers and carried to trucks waiting on the other side to be brought to Jerusalem.

With a United Nations negotiated ceasefire approaching June 11, which would forbid the construction of roads, time was of the essence.

It was a thin, hazardous dirt road. When winter’s rains arrived it would no longer be usable. The next task began of adequately securing the area and rebuilding the road which would be paved and five meters wide. The road was paved and the name was changed to Kvish HaGevurah. (The Road of Heroism)

The road’s completion was an astonishing feat. Despite all difficulties, it took only eight weeks for poorly equipped soldiers and volunteers to complete.

On December 7, 1948, an unusual parade of those who participated in the road’s construction marched past Prime Minister, David Ben Gurion. It consisted of troops who had captured Arab towns and hills near the roadside making construction possible. The young and elderly who had labored long hours in its building, the bullet pierced jeeps, along with Egged buses and donkeys which carried supplies when the jeeps could not. Ben Gurion addressed the crowd describing the vital importance of the feat, “This road, embodies the summit of our war for a homeland and independence, and the most heroic and tragic campaign since we were forced to stand up against our many enemies – the campaign over Jerusalem.”

Today, many of the armored cars sit alongside the road as a memorial to the actions to those who supplied Jerusalem. A plaque upon the location reads, “To our comrades who blasted the rock, routed the enemy, and made this road… If I forget the O’ Jerusalem, let my right hand forget its cunning.