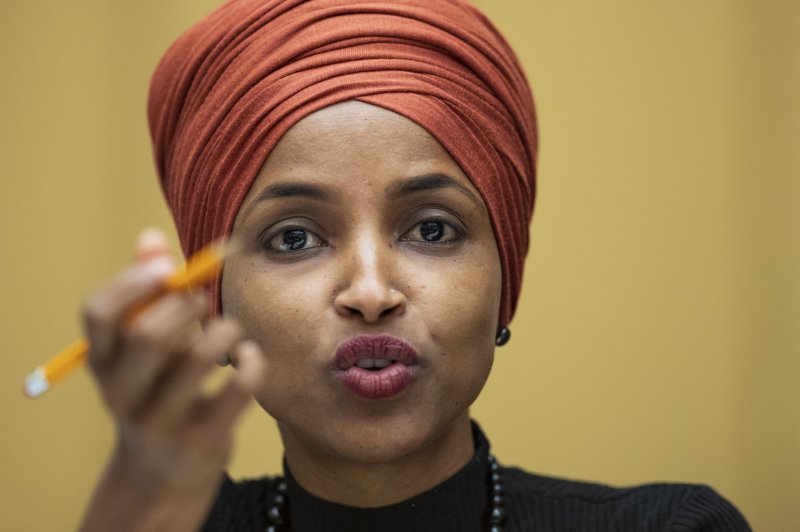 Rep. Ilhan Omar (D., Minn.) is under fire from an unlikely group—the anti-Israel, pro-Palestinian activists who once hailed her as their movement’s biggest star.

Omar, who has championed anti-Israel causes from her perch in Congress, recently signed on to a congressional letter urging the Trump administration to ensure that an international embargo on Iran’s purchase of advanced military equipment is not lifted later this year. In a rare display of agreement with her Republican colleagues, Omar lent her name to the letter, which was spearheaded by the American Israel Public Affairs Committee, the nation’s most prominent pro-Israel group.

The letter, which was signed by nearly every member of Congress from both parties, expressed support for Trump administration efforts at the United Nations to ensure the Iran arms embargo remains in place. If the embargo were lifted, Iran would be capable of purchasing advanced missiles that could strike into the heart of Israel.

Omar’s willingness to partner with AIPAC in its efforts to crack down on Iranian terrorism sent shockwaves through the anti-Israel community, eliciting a range of criticism from activists who heaped praise on Omar when she expressed anti-Semitic views and advocated for economic boycotts of the Jewish state.

“It’s official, [Omar] got her own taste of the Benjamin’s baby! She’s now under the spell of [AIPAC],” tweeted Palestinian activist Abbas Hamideh, referring to Omar’s past claim that AIPAC wields power by lining the pockets of members of Congress. “It was too hard for her to resist signing a letter stating Iran was a threat to ‘Israel’ and the Gulf States effectively voting for sanctions on Iran.”

“[Omar] has updated her bio: Mom, Refugee, Intersectional Feminist, and SELLOUT,” Hamideh later tweeted, one of several enraged missives he sent on the subject.

“When you sell yourself cheap you get outed by the entire Pro-Palestinian Movement. [Omar] has become the latest example of why identity politics can be deceiving,” he stated in another. “She sold out during the Holy Month of Ramadan. Keep that in mind next time when voting.”

These same activists rushed to praise Omar when she promoted anti-Semitic conspiracy theories about Israel’s control over U.S. foreign policy and called for Jewish goods to be blocked from the international marketplace.

Other Omar allies, such as Palestinian journalist Ramzy Baroud, accused the lawmaker of selling out her values to the pro-Israel community.

“Omar has signed on to a letter whose goal is to preserve and protect American empire and shore up its reactionary and undemocratic client states in the region,” Abunimah wrote in an article that went on to defend recently killed Iranian general Qassem Soleimani as an agent of “peaceful rapprochement.”

The American Conservative, a publication aligned with the anti-Israel isolationist movement that seeks to reduce the economic pressure on Iran, also expressed disappointment in Omar.

“The fact AIPAC was able to get these signatures is a testament to its influence and the hurt that it can bring down on politicians when [it] comes to re-election,” the publication wrote, echoing tropes about AIPAC’s supposed stranglehold on Congress.

“Omar’s recent signature on a letter that would have garnered hundreds of her colleagues’ support and made a splash with or without her, is a signal to AIPAC that she knows her seat is at risk, and that she would rather neutralize the feud with the pro-Israel powerhouse than send it flocking to the aid of her opponents,” according to the American Conservative.

Omar’s decision to back AIPAC’s letter elicited a vastly different response in the mainstream pro-Israel orbit.

One veteran Republican pro-Israel activist who works with AIPAC told the Free Beacon that Omar may be waking up to the threat posed by Tehran.

“People can have profound differences about foreign policy while still recognizing the existential threat that the Islamic Republic of Iran poses to American interests throughout the Middle East,” said the source, who was not authorized to speak on the record about the letter. “These sanctions help prevent the regime from spreading terrorism and further destabilizing the region. At the end of the day, I’m pleased Rep. Omar realizes that it’s all about the ballistic missiles.”