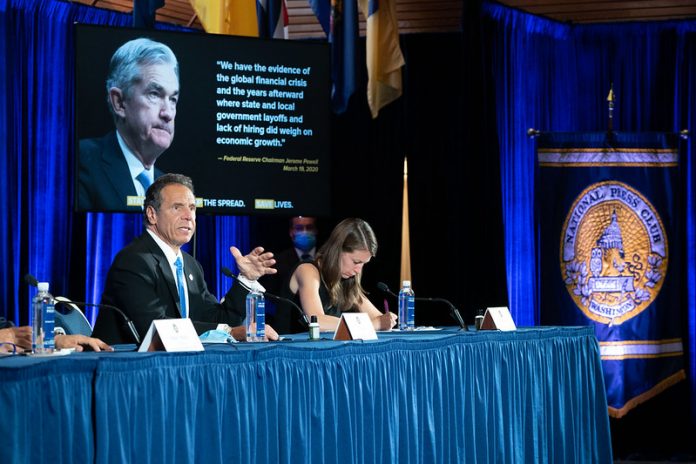 Mr. Cuomo also delivered the state’s daily fatality report: 74 more people died of the coronavirus, about the same as the previous two days.

Cuomo met with President Trump today to discuss a coronavirus relief bill .Amid the ongoing COVID-19 pandemic, Governor Andrew M. Cuomo today called on the U.S. Senate to pass a coronavirus relief bill that helps all Americans and provides unrestricted fiscal support for states. The next bill should focus on funding state and local governments, working families, state testing and tracing efforts and a real economic stimulus with no handouts to corporations who do not protect their workers and only enrich executives or shareholders. The House of Representatives has already passed a bill that includes $500 billion for states and $375 billion for locals; Medicaid funding for the most vulnerable; increased SNAP food assistance; 100 percent FEMA federal assistance; funding for testing; and repeals SALT cap to help states most affected by COVID-19.

Governor Cuomo also reiterated his call for the U.S. Senate to repeal the SALT limitations. The states most impacted by COVID-19 represent more than one-third of the national GDP. They also send tens of billions of tax dollars more to the federal government than they get back, and the dollars they send are then redistributed to other states and big corporations. These very same states that have been most impacted by COVID-19, are also the states that were hit hardest by the cap on state and local taxes, the politically motivated first double tax in U.S. history that was implemented by the federal tax law in 2017.