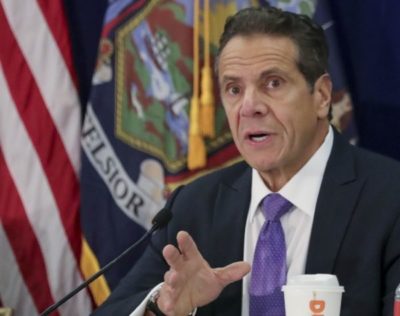 The number of new hospitalizations related to the virus was at its lowest number since March 19, before the state’s shutdown began, Mr. Cuomo said.

The governor also said that an additional 161 people in the state had died of the virus. It was the state’s lowest one-day death toll since March 27.

Amid the ongoing COVID-19 pandemic, Governor Andrew M. Cuomo today announced that as of today, the Finger Lakes, Southern Tier and Mohawk Valley Regions have met all seven metrics required to begin phase one of the state’s regional phased reopening plan when NYS on PAUSE orders expire on May 15th. If the trend continues, starting on May 15th, these three regions can begin opening businesses for phase one, which includes construction; manufacturing and wholesale supply chain; retail for curbside pickup and drop-off or in-store pickup; and agriculture, forestry and fishing. The North Country and Central NY regions have met 6 of the 7 metrics and could be ready at the end of the week. A guide to the state’s “NY Forward Reopening” Plan is available here. The Governor also launched the state’s regional monitoring dashboard, which is available here.

However, NYC is not quite ready for any re-opening steps, the Times reported:

A ban on large gatherings in New York City and the accompanying widespread closing of nonessential businesses are unlikely to end before June, Mayor Bill de Blasio said on Monday.

June is when we’re potentially going to be able to make some real changes if we can  can continue our progress,” Mr. de Blasio said at a daily news briefing.

“We are starting a new chapter in the fight against this virus – we’ve worked together as a state to flatten the curve and the decline has finally reached a point where it is just about where we started this journey, so now we can turn to reopening,” Governor Cuomo said. “As we approach May 15, we have put regional control rooms in place, which are made up of the top government officials and academic and healthcare professionals in that region, to watch the situation in each region develop and increase or decrease the activity and speed of reopening based on the  metrics and guidelines. These control rooms are critical because we just made it over the mountain and nobody wants to go back to the other side now.”