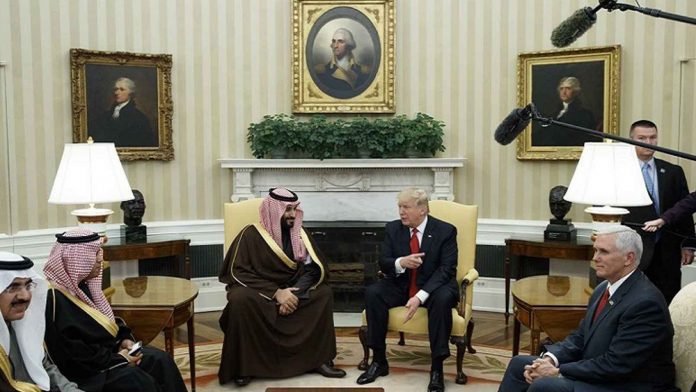 The Saudis have for the moment stopped hating Israel. Wouldn’t it be nice if liberal Jews did, too?

The House of Saud, the oldest enemies of an independent free Jewish state, have at least temporarily abandoned their project to destroy it by replacing it with the Islamic terrorist colony of “Palestine.”

That’s more than you can say for liberal Jews.

It’s a sad day when Wahhabi Islam shows more aptitude for setting aside its fanaticism and adapting to reality than the alphabet soup organization leaders and non-profit newspapers that have been running the liberal Jewish community into the ground for more than 100 years without ever learning a thing.

This failed establishment is wringing its hands because Israeli law might be applied to parts of the West Bank filled with Jewish towns and villages that were liberated 53 years ago in the Six-Day War. That means Israeli citizens living in cities like Ma’ale Adumim (pop. 38,193) would actually fully live under Israeli law, instead of a clumsy hybrid system of military law, antiquated regional law, and national law.

And, as Caroline Glick pointed out, “The Israel Defense Forces will benefit from the move because soldiers and officers will not be responsible for issues like directing traffic and providing building permits for everything from parking lots to kindergartens to neighborhoods.”

Please raise your hand if you want the military to be responsible for directing traffic.

What the anti-occupation opponents of Israeli sovereignty are really fighting against is an end to the occupation. Their weapons are terminology. They call applying Israeli sovereignty “annexation” and refer to cities like Ma’ale Adumim as “settlements.” They also insist that some Arab Muslim cities that are the same age and size are “refugee camps.” These walls of words have enraptured policymakers and NPR listeners for generations while completely ignoring the physical realities of life for Jews and Muslims.

Israel assuming responsibility for cities and villages, for territory that would remain its own, is Prime Minister Netanyahu’s plan and President Donald Trump’s plan. What counter-plan do its opponents offer?

There is the endless peace process, which its proponents believe in almost as assiduously as religious Jews believe in God and the Bible, though their faith is in a much more intangible phenomenon because the peace process has never existed, has never been seen or experienced, and is taken entirely on faith.

After three miserable decades, the religion of the peace process is on its last legs. No one has seen hide or hair of peace since before the internet was this strange thing that only a few people were using.

True believers used to claim that an administration actively hostile to Israel could apply enough pressure to force the Jewish state to make so many concessions that the terrorists would just have to accept.

Mahmoud Abbas, the 84-year-old dictator of the Palestinian Authority, was a mere lad in his 50s when this kettle of fish was put on the stove. He has refused to negotiate with the Trump administration and also the Obama administration. His predecessor, Yasser Arafat, sabotaged peace negotiations during the Bush and Clinton administrations. History and common sense say his successors will do the same thing.

Go to a racetrack. Bet on the worst horse, the one that can hardly stand upright, and you’ll have better odds than betting on successful peace negotiations leading to two states living together in peace.

Pro-Israel opponents of annexation argue for playing the waiting game some more. But waiting isn’t a plan. Israel has been waiting for a generation. First, it was waiting for peace partners on the PLO side. Then it settled in to wait for someone in the White House who finally gets it. Why keep on waiting?

The peace partners aren’t coming. The Arab petrocracies are worried enough about Iran that they’re making common cause with Israel. And President Trump is the most pro-Israel president in history.

There’s nothing else to wait for except the coming of the messiah.

This is a once-in-a-lifetime opportunity to move forward after decades of inaction and defensive measures, to set the terms, instead of passively reacting as they are set for Israel by the terrorists.

Sovereignty isn’t going to change everything. But it allows Israel to begin restoring normalcy. It’s either that or waiting endlessly for a peace process that will never arrive or a war that much more likely will.

Either that or withdraw unilaterally from everywhere and hope that the terrorists stop the killing.

Three American and six Israeli administrations have tried everything from negotiations to unilateral withdrawals. They’ve all failed. The remaining options are to do nothing or take assertive steps.

That’s what President Trump’s peace plan did. It’s what Prime Minister Netanyahu is trying to do.

Proponents of the perpetual status quo warn that the Democrats, the Europeans, the Arabs, and, worst of all, liberal Jews, will turn on Israel if it applies its laws to its territory that it liberated 53 years ago.

The obvious question is if they do, what is Israel’s relationship with them worth anyway?

In the real world, Democrats and Republicans are tired of being asked about the peace process. It’s burned every president who touched it. Europeans governments cynically never cared about it, but ritually bash Israel to appease their Arab trading partners and domestic Muslim populations. The Arabs hoped to use the “Palestinian” hoax to destroy Israel, only to realize that they need Israel to take on Iran.

To reduce that paragraph to a sentence, no one except liberal Jews cares anymore.

Except for the Qataris, the reliable allies of Iran and the Muslim Brotherhood, the Arabs have moved on. There are a lot fewer ambassadors, politicians and generals coming back from the Gulf and parroting the talking points of their hosts blaming all the regional instability on Israel. The new message is that all the regional instability is being caused not by Israel, but by Iran.

The domestic Muslim constituencies, whether it’s the imams in Manchester and Toulouse, or CAIR and Rep. Ilhan Omar, are not going to stop agitating for the destruction of Israel no matter what it does. Nor will their lefty allies who have incorporated the “Palestinian” plank into their socialist rage programs.

They are unappeasable because hating Jews and Israel gives them added purpose and meaning.

The Wahhabis can readapt to circumstances, but there’s no need for the green diaspora and its red ruling class to adapt to a damn thing. There’s virtually no downside to hating Jews, bombing synagogues, or attacking Jewish students on campus. And whatever downside occurs is suffered by the red allies, Jeremy Corbyn or Bernie Sanders, not the green diaspora which will go on hating just as much.

Especially because its Muslim Brotherhood leadership is interchangeable with Hamas.

And liberal Jews? They have the same choice that they always did. They can stand with their people or with their fashionable progressive friends. They can, in their cowardly fashion, blame Netanyahu for forcing them to make that choice. But they’re only lying to themselves about why they made the wrong choice.

Israel and the hard left were irreconcilable long before Netanyahu was born. Go ask Marx what he thought of the Jews, “What is the worldly religion of the Jew? Huckstering. What is his worldly God? Money.” Go ask Lenin, “Whoever, directly or indirectly, puts forward the slogan of Jewish ‘national culture’ is … an enemy of the proletariat … he is an accomplice of the rabbis and the bourgeoisie.”

Go ask the guy who coined the term socialism, “Every government having regard to good morals ought to repress the Jews.”

That’s exactly what every moral socialist government from the Soviet Union to the Sandinistas, from Gomulka’s Poland to Chavez’s Venezuela did, for over a century.

I’m sorry that it’s awkward when Jewish liberals show up to campus intersectional protests over pipelines, police, Palestine and other things beginning with “P.” But it didn’t begin with Netanyahu or Israel. Liberal Jews need to stop blaming Israel because their lefty friends are anti-Semitic bigots.

The Saudis have for the moment stopped hating Israel. Wouldn’t it be nice if liberal Jews did, too?

Daniel Greenfield, a Shillman Journalism Fellow at the Freedom Center, is an investigative journalist and writer focusing on the radical left and Islamic terrorism.