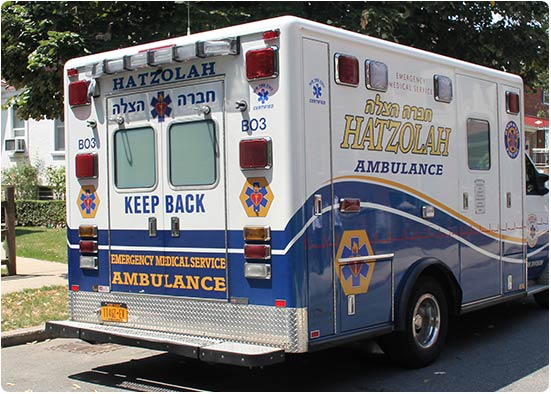 Light at the end of the tunnel: Grand Central annex opens

In a major fundraising event, the Hatzolah volunteer ambulance corps staged a very special Lag B’Omer 24-hour telethon that was viewed by countless people throughout the world, as the organization that tirelessly devotes itself exclusively to saving lives, raised close to $15 million  as of Wednesday evening.

Founded in 1965 in New York City, Hatzolah has seen exponential growth over the decades and now serves all major in America and all over the world. Operating 24 hours a day, 7 days a week, this not-for-profit corporation is run by a virtual army of incredibly dedicated professional emergency care providers including EMTs, paramedics and physicians.

Responding to over 100,000 calls annually in record time, Hatzolah provides emergency medical assistance, ambulance transport, family referral services and much more. Moreover, it has come to represent the absolute and total commitment to the sanctity of life.

in the harrowing times in which we live – now known as the “age of corona” the sheer volume of Hatzolah calls has precipitously skyrocketed and Hatzolah has not missed one call nor turned down assistance to anyone who is in need. Hatzolah has not only been on the front lines in helping thousands of people stricken by the deadly pandemic but is continuing their heroic work in ensuring that these people are taken care of in a proper fashion.

Hatzolah chapters from all over the world put their energies, resources and talents together with a goal of producing a telethon that would raise $10 million, but the outcome far exceeded their expectations.

According to Alan Esses, a board member of Flatbush Hatzolah, the telethon was the brainchild of three exceptional people who provided the financial assistance to make this dream become a reality.

It all began when the founders of an organization known as United for Protection decided to find this ambitious project.  Zalmy Cohen, Berel Junik and Shloime Greenwald had undertaken to collect funds to have a Sefer Torah written to help in quashing the spread the mageyfah known as the Coronavirus which had claimed an inordinate amount of lives in the Jewish community.

“The campaign to raise funds for a Sefer Torah to be written went viral and became an enormous success, ” said Mr. Esses.  “These three extraordinary businessmen and activists raised much more money for the Sefer Torah than they had expected and had decided that if there was excess funds that they would make a very generous donation to Hatzolah.  After giving this much thought, they decided to use the extra monies collected to produce a Lag B’Omer telethon which would serve as a platform to raise even more money for Hatzolah chapters around the world, ” he added.

Mr. Esses expressed his views about the telethon by saying, “It was truly amazing that through the help of Zalmy Cohen, Berel Junik and Shloime Greenwald and the efforts of Hatzolah members the world over that this telethon was organized in two short weeks.”

In order to scrupulously adhere to the social distancing guidelines that have been implemented by governmental agencies to ensure that people do not place themselves at risk for contracting the COVID-19 infection, the organizers and staff of the telethon built 14 stages.

“I was very impressed with the way the telethon was managed, ” said Mr. Esses. “When I drove my friend Harry Adjmi to the telethon studio to tell his story of how Hatzolah members saved his life when he was experiencing serious symptoms of the Coronavirus, they had specific rules about when we could arrive, what entrances and exits to use, and they made sure that people were very far apart from each other, ” he added.  Mr. Esses said, “That is an extremely difficult feat to accomplish when doing a telethon of this magnitude, but with Hashem’s help it was done.”

When speaking at the telethon about his own story and the incredible work that Hatzolah does each and every day, Harry Adjmi (a renowned philanthropist and prominent member in the Syrian Jewish community) spoke of the night that Hatzolah came to his home and convinced him to go to the hospital after he was experiencing severe symptoms of the virus. He said that had it not been for Hatzolah he may not have made it through and credited these intrepid members for saving his life.

” I donated $10,000 to Hatzolah and my son donated $10,000 a few weeks ago, ” said Mr. Adjmi.  He added that these young men who devote their entire lives to saving others should be supported by everyone.

Mr. Esses told the Jewish Voice that 30 minutes after appearing on the Hatzolah telethon, Mr. Adjmi arrived at the Flatbush Hatzolah command center where he thanked the team of members working all day on the phones.

“In New York alone, we raised $2,2 million in two days for Hatzolah. That is truly amazing,” said Mr. Esses.

The $14.8 million that has been raised will be distributed to Hatzolah chapters around the world to help with the purchase of much needed equipment and expenses related to daily operations.

The musical producer of the telethon was Davidi Crombie who told COLive.com that this was the first time that a telethon that lasted for so many hours was ever done in the Jewish world and that “we faced the difficulty of producing a show with dozens of performers, musicians and crew members, all while keeping to the CDC and New York State Health Department rules.”

Recently,  the Rabbinical Alliance of America (RAA)  issued an official proclamation honoring the exemplary work that the Hatzolah volunteer ambulance corps is doing each and every day during the COVID-19 pandemic.

“Just as in previous moments of national crisis such as the 9/11 attacks in 2001, Hatzolah has reacted to the COVID-19 outbreak with the same degree of alacrity, compassion, professionalism and determination to save every life possible,” said Rabbi Mendy Mirocznik, executive vice president of the RAA.

Harry Adjmi speaks on the telethon

30 minutes later Harry came to Flatbush Hatzalah command center where he thanked the team of members working all day on the phones. We raised 2.2 million dollars in 2 days. Amazing