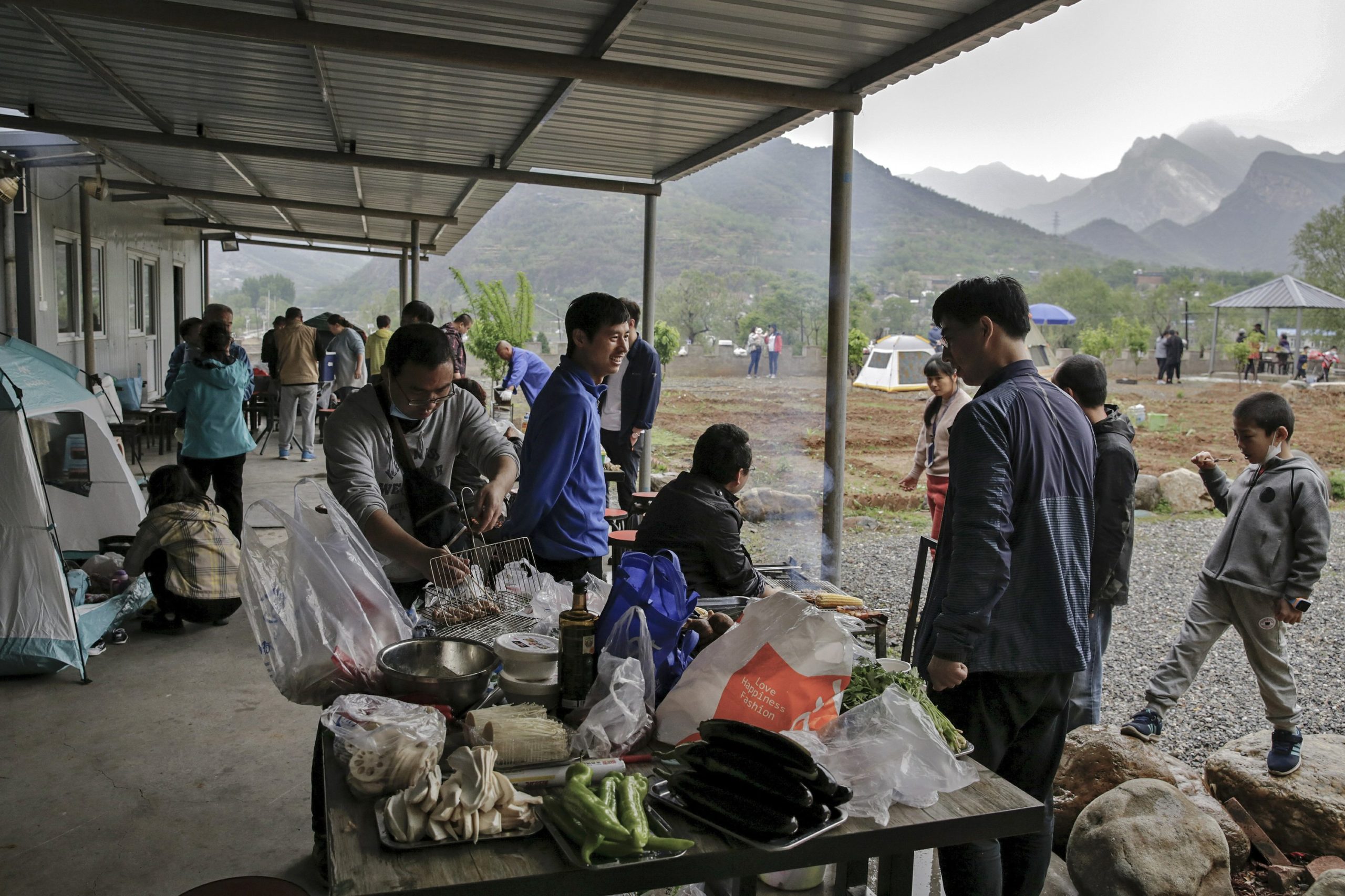 U.S. officials believe China covered up the extent of the coronavirus outbreak — and how contagious the disease is — to stock up on medical supplies needed to respond to it, intelligence documents show.

Chinese leaders “intentionally concealed the severity” of the pandemic from the world in early January, according to a four-page Department of Homeland Security intelligence report dated May 1 and obtained by The Associated Press. The revelation comes as the Trump administration has intensified its criticism of China, with Secretary of State Mike Pompeo saying Sunday that that country was responsible for the spread of disease and must be held accountable.

The sharper rhetoric coincides with administration critics saying the government’s response to the virus was slow and inadequate. President Trump’s political opponents have accused him of lashing out at China, a geopolitical foe but critical U.S. trade partner, in an attempt to deflect criticism at home.

Not classified but marked “for official use only,” the DHS analysis states that, while downplaying the severity of the coronavirus, China increased imports and decreased exports of medical supplies. It attempted to cover up doing so by “denying there were export restrictions and obfuscating and delaying provision of its trade data,” the analysis states.

The report also says China held off informing the World Health Organization that the coronavirus “was a contagion” for much of January so it could order medical supplies from abroad — and that its imports of face masks and surgical gowns and gloves increased sharply.

Those conclusions are based on the 95% probability that China’s changes in imports and export behavior were not within normal range, according to the report.

China informed the WHO of the outbreak on Dec. 31. It contacted the U.S. Centers for Disease Control on Jan. 3 and publicly identified the pathogen as a novel coronavirus on Jan. 8.

Chinese officials muffled doctors who warned about the virus early on and repeatedly downplayed the threat of the outbreak. However, many of the Chinese government’s missteps appear to have been due to bureaucratic hurdles, tight controls on information and officials hesitant to report bad news. There is no public evidence to suggest it was an intentional plot to buy up the world’s medical supplies.

“Intelligence has just reported to me that I was correct, and that they did NOT bring up the CoronaVirus subject matter until late into January, just prior to my banning China from the U.S.,” Trump wrote without citing specifics. “Also, they only spoke of the Virus in a very non-threatening, or matter of fact, manner.”

Trump had previously speculated that China may have unleashed the coronavirus due to some kind of horrible “mistake.” His intelligence agencies say they are still examining a notion put forward by the president and aides that the pandemic may have resulted from an accident at a Chinese lab.

Speaking Sunday on ABC’s “This Week,” Pompeo said he had no reason to believe that the virus was deliberately spread. But he added, “Remember, China has a history of infecting the world, and they have a history of running substandard laboratories.”

“These are not the first times that we’ve had a world exposed to viruses as a result of failures in a Chinese lab,” Pompeo said. “And so, while the intelligence community continues to do its work, they should continue to do that, and verify so that we are certain, I can tell you that there is a significant amount of evidence that this came from that laboratory in Wuhan.”

The secretary of state appeared to be referring to previous outbreaks of respiratory viruses, like SARS, which started in China. Pompeo repeated the same assertion hours later, via a tweet Sunday afternoon.

On Monday, China’s official Global Times newspaper said Pompeo was making “groundless accusations” against Beijing by suggesting the coronavirus was released from a Chinese laboratory.

The populist tabloid published by the ruling Communist Party mouthpiece People’s Daily said the claims were a politically-motivated attempt to preserve Donald Trump’s presidency and divert attention from the U.S. administration’s own failures in dealing with the outbreak.

“As the U.S. presidential election campaigns are underway, the Trump administration has implemented a strategy designed to divert attention from the incompetence it has displayed in fighting the pandemic,” the paper said in an editorial.

The paper has made the U.S. top diplomat a main target of its attacks, in recent weeks describing him as “despicable” and of having “evil intentions” by blaming China for having caused the pandemic.

While the virus is believed to have originated in the central Chinese city of Wuhan, most scientists say it was most likely transmitted from bats to humans via an intermediary animal such as the armadillo-like pangolin. That has placed the focus on a wet market in the city where wildlife was sold for food.

The theories about a possible human release have centered on the Wuhan Institute of Virology which undertook research into the transmission of pathogens from animals to people.

Beijing has repeatedly pushed back on U.S. accusations that the outbreak was China’s fault, pointing to many missteps made by American officials in their own fight against the outbreak. China’s public announcement on Jan. 20 that the virus was transmissible from person to person left the U.S. nearly two months to prepare for the pandemic, during which the U.S. government failed to bolster medical supplies and deployed flawed testing kits.

In other coronavirus developments, it was reported that if the New York metropolitan area’s progress against the coronavirus is taken out of the equation and the numbers show the rest of the U.S. is moving in the wrong direction, with the infection rate rising even as states move to lift their lockdowns, then we are in for trouble, an Associated Press analysis found Tuesday.

Scientists warn those numbers will only grow as governors and local officials across the country ease their stay-at-home restrictions and reopen businesses.

Meanwhile, Britain’s official coronavirus death toll, at more than 29,000, surpassed that of Italy to become the highest in Europe and second-highest in the world behind the United States.

In the U.S., some states took continued steps to lift the lockdown restrictions that have thrown millions out of work, even as the country recorded thousands of new infections and deaths every day. Public health experts warned the easing could result in tens of thousands of additional deaths.

The New York metropolitan area, consisting of about 20 million people across about two dozen counties, including the city’s northern suburbs, Long Island and northern New Jersey, has been the hardest-hit corner of the country, accounting for at least one-third of the nation’s 70,000 deaths.

When the still locked-down metropolitan area is included, new infections in the U.S. appear to be declining, according to the AP analysis. It found that the five-day rolling average for new cases has decreased from 9.4 per 100,000 people on April 9 to 8.6 on Monday.

But taking the New York metropolitan area out of the analysis changes the story. Without it, the rate of new cases in the U.S. increased over the same period from 6 per 100,000 people to 7.5.

While the daily number of new deaths in the metropolitan area has declined in recent weeks, it has merely plateaued in the rest of the U.S., the AP analysis found.

Deaths in Iowa surged to a new daily high of 19 on Tuesday, and 730 workers at a single Tyson Foods pork plant tested positive. On Monday, Shawnee County, home to Topeka, Kansas, reported a doubling of cases from last week on the same day that business restrictions began to ease.

“Make no mistakes: This virus is still circulating in our community, perhaps even more now than in previous weeks” said Linda Ochs, director of the Shawnee County Health Department.

Gallup, New Mexico, is under a strict lockdown until Thursday because of an outbreak, with guarded roadblocks to prevent travel in and out the town and a ban on more than two people in a vehicle. Authorities have been sending water tankers into town, hospital space is running short, and a high school gym has been converted into a recuperation center with 60 oxygen-supplied beds.

New infections per day in the U.S. exceed 20,000 and deaths are well over 1,000, according to figures from Johns Hopkins University.

On Monday, one widely cited model from the University of Washington nearly doubled its projection of deaths in the U.S. from the coronavirus to around 134,000 through early August, with a range of 95,000 to nearly 243,000.

Dr. Christopher Murray, director of the institute that created the projections, said the increase is largely because most states are expected to ease restrictions by next week.

Without stay-at-home orders and similar measures, Murray said, “we would have had exponential growth, much larger epidemics and deaths in staggering numbers.” But cooperation is waning, with cellphone location data showing people are getting out more, even before their states reopen, he said.

“The rise in mobility in the last week to 10 days is likely leading to some transmission” of the virus, Murray said.

Dr. Zuo-Feng Zhang, a public health researcher at the University of California at Los Angeles, said it worries him that the rate of new cases is increasing at the same time some states are easing up.

“We’re one country. If we’re not moving in the same step, we’re going to have a problem,” Zhang said.

He worries that new hot spots will form and said he is particularly concerned about Florida and Texas, places where cases have been rising steadily and the potential for explosions seems high.

While death rates in places have been trending down, that could change as cases rise rapidly and hospitals become overwhelmed, he said.

Governments around the world have reported 3.6 million infections and more than a quarter-million deaths. Deliberately concealed outbreaks, low testing rates and the severe strain the disease has placed on health care systems mean the true scale of the outbreak is undoubtedly much greater.

The British government said about 29,400 people with COVID-19 have died in hospitals, nursing homes and other settings, while Italy reported just over 29,300 confirmed fatalities.

Both countries’ counts are probably underestimates because they do not include suspected cases. Britain reported more than 32,000 deaths in which COVID-19 was either confirmed or suspected; a comparable figure for Italy was not available.

Even so, the rate of deaths and hospitalizations in Britain was on the decline, and the government prepared to begin loosening the lockdown.

A trial began in Britain of a mobile phone app that authorities hope will help contain the outbreak. The app, which warns people if they have been near an infected individual, is being tested on the Isle of Wight, off England’s southern coast. The government hopes it can be rolled out across the country later this month.

Many European countries that have relaxed strict lockdowns after new infections tapered off were watching their virus numbers warily.

South Korea reported only three new cases of the virus, its lowest total since February. On Tuesday, the country’s baseball season began, with no spectators allowed. In China, it has been three weeks since any new deaths have been reported in the country where the outbreak began late last year. (AP)