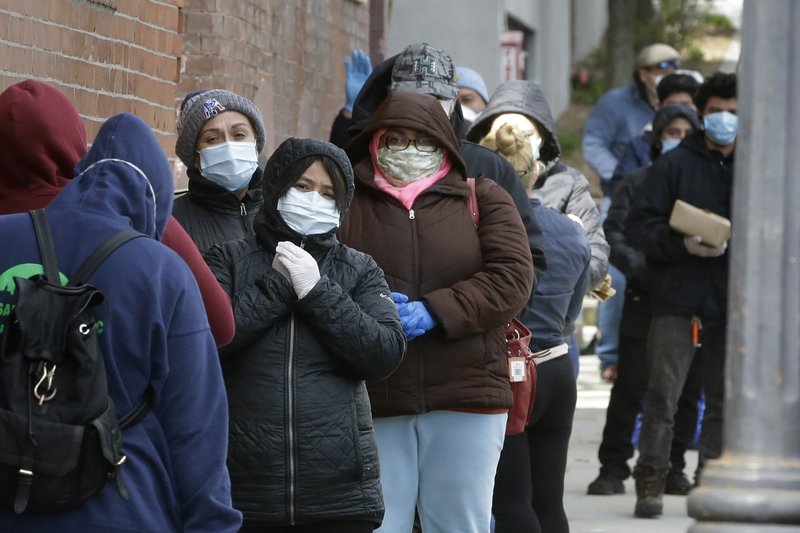 The ranks of America’s unemployed swelled toward Great Depression-era levels Thursday, and President Donald Trump reacted to the pressure on the economy by outlining a phased approach to reopening parts of the country where the coronavirus is being brought under control.

Under the plan, presented by Trump in a call with the nation’s governors, the president will ease his social-distancing guidelines to allow states to start getting back to business over the next several weeks in places that have strong testing and have seen a decrease in COVID-19 cases.

“You’re going to call your own shots,” Trump told the governors, according to an audio recording obtained by The Associated Press, after a week in which he clashed with them over his claim that he has “total” authority over how and when the country reopens.

The move came on the same day the government reported 5.2 million more Americans applied for unemployment benefits last week, bringing the four-week total to 22 million — easily the worst stretch of U.S. job losses on record. The losses translate to about 1 in 7 American workers.

The bleak picture intensified the debate over how and when to start lifting the lockdowns and other restrictions that have all but strangled the economy.

While many Americans have chafed at the damage to their livelihoods, business leaders and governors have warned that more testing and protective gear are needed first. And health experts have cautioned that easing the restrictions too soon could allow the virus to come storming back.

My No. 1 focus is to keep my family safe, so I’m really not in a hurry to put an end to this,” said Denise Stockwell, who is about to lose her job in marketing at Cornell University in Ithaca, New York.

But conservative economist Steven Moore, a Trump ally, said there will be 30 million people out of work in the country if the economy doesn’t open back up soon. “And that is a catastrophic outcome for our country. Period,” he said. “You’re going to have social chaos.”

Worldwide, the outbreak has infected more than 2.1 million people and killed more than 140,000, according to a tally by Johns Hopkins University, though the true numbers are believed to be much higher. The death toll in the U.S. reached about 31,000, with around 650,000 confirmed infections.

The spread of the virus is declining in such places as Italy, Spain and France, but is rising or continuing at a high level in Britain, Russia and Turkey, authorities said.

New York, the most lethal hot spot in the U.S., reported more encouraging signs, with a drop in the daily number of deaths statewide and the overall count of people in the hospital. “We’ve controlled the beast. We’ve brought the rate of spread down,” Gov. Andrew Cuomo said. Still, Cuomo extended the state’s lockdown through at least May 15, and New York City is lining up 11,000 empty hotel rooms to quarantine people living in crowded apartment buildings.

Many Americans, especially in rural areas and other parts of the country that have not seen major outbreaks, have called on governors to reopen their economies. More than 3,000 turned out this week to decry the Michigan governor’s restrictions, police broke up a demonstration in North Carolina, and protests also took place in Oklahoma, Kentucky and Virginia.

“Those people that know they’re vulnerable, self-quarantine. And everybody else, let them go back to work,” Aaron Carver, a laid-off construction worker said at a protest in Richmond, Virginia.

The decision of whether to relax the restrictions rests not with the White House but with the state and local leaders who imposed them in the first place. Seven Midwestern governors announced Thursday that they will coordinate on reopening their economies, after similar pacts were reached among states in the Northeast and on the West Coast.

Delaware Gov. John Carney, a Democrat, said the White House guidelines “seem to make sense,” adding that states are “days, maybe weeks away from the starting line,” while West Virginia Gov. Jim Justice, a Trump ally, said capacity and contact tracing would need to be considerably ramped up before restrictions could be safely lifted.

“All would be forgotten very quickly if we moved into a stage quicker than we should, and then we got into a situation where we had people dying like flies,” Justice said.

Mayor Bill de Blasio of New York City, with more than one-third of the nation’s coronavirus deaths, was among those urging caution.

“Everyone wants our economy to restart,” he said. But “if we can’t provide the basics for our people, then you can kiss your recovery goodbye.”

Two in three Americans expressed concerns that restrictions meant to slow the spread of the virus would be eased too quickly, according to a Pew Research Center survey released Thursday.

Economists said the unemployment rate could reach 20% in April, the highest since the Depression of the 1930s. Layoffs are spreading well beyond stores, restaurants and hotels to white-collar professionals such as software programmers and legal assistants.

“It’s just shut down everything, turned off the whole city,” said Jacques Primo, 40, who was laid off from his bartending job at a Savannah, Georgia, seafood restaurant and found himself in line at a food pantry. “Before, I’ve never been worried, because I’ll go find another job. Now you can’t. It’s impossible.”

By all accounts, the lifting of restrictions, when it happens, won’t be like flipping a switch. Restaurants and other businesses may be reopened in phases, with perhaps a limited number of entrances or reduced seating areas, while grocery stores may stick with one-way aisles and protective shields at the cash registers, experts say.

Even then, it could take awhile before business comes back, if China and certain places in Europe are any indication.

Jeremiah Juncker, manager of the Rappourt pub in Ann Arbor, Michigan, wonders whether anyone would come if he were even allowed to reopen.

“It might be ‘back to normal’ for everyone else, but people still don’t feel comfortable gathering at restaurants and bars,” he said.

Many European countries, like the U.S., have seen heavy job losses, but places like Germany and France are using government subsidies to keep millions of people on payrolls instead of letting them go on unemployment.

But political leaders on the Continent are still trying to find a balance between their country’s health and its wealth.

“Ladies and gentlemen, the transition is beginning,” Home and Health Minister Alain Berset said. “We want to go as fast as possible, and as slow as necessary.”