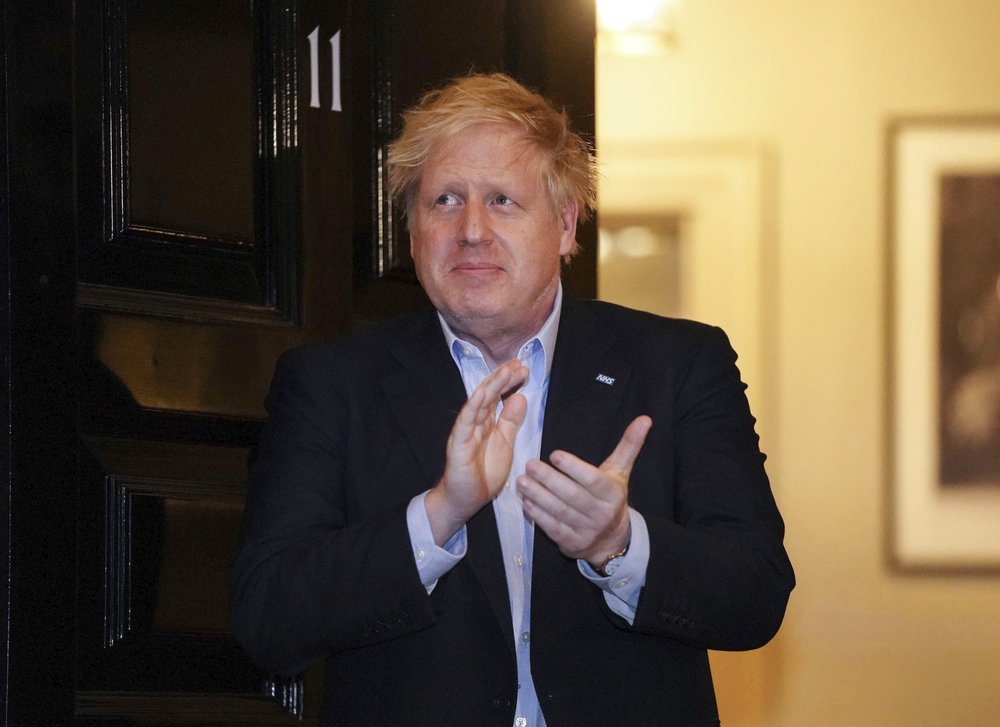 British Prime Minister Boris Johnson was admitted to a hospital Sunday for tests, his office said, because he is still suffering symptoms, 10 days after he was diagnosed with COVID-19.

Johnson’s office said the admission to an undisclosed London hospital came on the advice of his doctor and was not an emergency. The prime minister’s Downing St. office said it was a “precautionary step” and Johnson remains in charge of the government.

Johnson, 55, has been quarantined in his Downing St. residence since being diagnosed with COVID-19 on March 26 — the first known head of government to fall ill with the virus.

Johnson has continued to preside at daily meetings on Britain’s response to the outbreak and has released several video messages during his 10 days in isolation.

In a message Friday, a flushed and red-eyed Johnson said he said he was feeling better but still had a fever.

The virus causes mild to moderate symptoms in most people, but for some, especially older adults and the infirm, it can cause pneumonia and lead to death.

U.S. President Donald Trump offered encouragement to Johnson as he opened a White House briefing on the pandemic Sunday. ”All Americans are praying for him,” Trump said.

Johnson has received medical advice remotely during his illness, but going to a hospital means doctors can see him in person.

Dr. Rupert Beale, a group leader of the cell biology of infection lab at the Francis Crick Institute for biomedical studies, said doctors would likely “be monitoring important vital signs such as oxygen saturations,” as well as performing blood tests, assessing Johnson’s organ function and possibly performing a CT scan on his chest to assess his lungs.

Foreign Secretary Dominic Raab, who has been designated to take over if Johnson becomes incapacitated, is set to lead the government’s coronavirus meeting Monday.

Johnson’s fiancee, Carrie Symonds, 32, revealed Saturday that she spent a week in bed with coronavirus symptoms, though she wasn’t tested. Symonds, who is pregnant, said she was now “on the mend.” She has not been staying with the prime minister in Downing St. since his diagnosis.

Johnson replaced Theresa May as Conservative prime minister in July and won a resounding election victory in December on a promise to complete Britain’s exit from the European Union. But Brexit, which became official Jan. 31, has been overshadowed by the coronavirus pandemic sweeping the globe.

Johnson’s government was slower than those in some European countries to impose restrictions on daily life in response to the pandemic, leading his critics to accuse him of complacency. He imposed an effective nationwide lockdown March 23, but his government remains under huge pressure to boost the country’s number of hospital beds and ventilators and to expand testing for the virus.

London has been the center of the outbreak in the U.K., and politicians and civil servants have been hit hard. Several other members of Johnson’s government have also tested positive for the virus, including Health Secretary Matt Hancock and junior Health Minister Nadine Dorries. Both have recovered.

News of Johnson’s admission to hospital came an hour after Queen Elizabeth II made a rare televised address to the nation, in which she urged Britons to remain “united and resolute” in the fight against the virus.

“We will succeed — and that success will belong to every one of us,” the 93-year-old monarch said, drawing parallels to the struggle of World War II.

Shocking Report: 75,000 in UK Could Die as Result of Increased Lockdown Orders