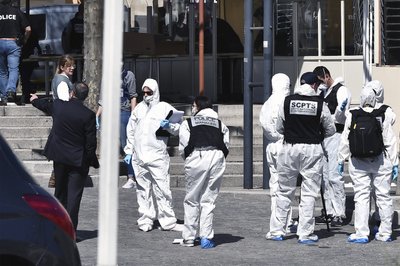 Two people were killed and four injured Saturday in a stabbing attack in southeastern town of Romans-sur-Isère, about 20km north of Valence.

According to the mayor of the French town, a man armed with a knife attacked people shopping in town, killing two of them and wounding an additional five.

The first victim of the stabbing was a Romanian national who had recently left his home. The terrorists slit the man’s throat in front of the victim’s girlfriend and son. He then entered a tobacco shop and proceeded to stab the owner along with two customers. From there, he continued to a butcher shop and supermarket where he resumed the killing spree.

French authorities have thus far denied reports that the terrorist yelled “Allahu Akbar!” (Arabic for “G-d is great) prior to carrying out the attack.

i24NEWS reported that according to news sources, the perpetrator is a 33-year-old Sudanese asylum seeker.

The news site also quoted French media outlet Le Parisien as saying that the perpetrator lived next to the crime scene, and that his roommate had also been taken into custody.

According to a Guardian report, police arrested the man at about 11 in the morning.

French President Emmanuel Macron tweeted: “My thoughts go out to the victims of the attack in Romans-sur-Isère, the injured and their families. We will fully investigate this odious act that has added more grief to our country that has already suffered so much over the last few weeks.”

Visit Israel National News for up to date News