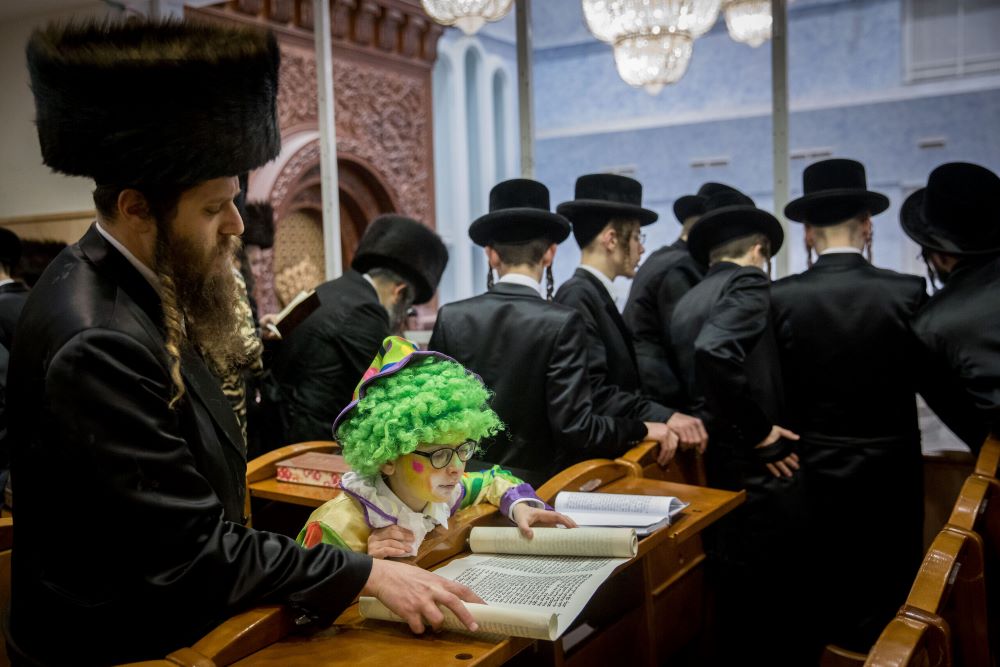 Synagogues, day schools, Jewish community centers and other groups are deciding how they will celebrate what is perhaps the most festive Jewish holiday, especially for families.

Jews around the world are expected to gather in synagogues on Monday night to hear the story of Queen Esther and how the Jews of Persia were saved from annihilation.

That, however, was before the coronavirus came on the scene, and rabbis had to figure out ways to ensure that congregants could participate in the holiday while dealing with self-isolation, states of emergency and home quarantines.

Synagogues, day schools, Jewish community centers and the like are re-envisioning how they will celebrate what is perhaps the most festive Jewish holiday, especially for families. Nationwide, dozens of events large and small have been cancelled, some because of states of emergency declared by local health officials.

It was the latter that forced the cancellation of four different Purim-related events that the Israeli American Coalition in Seattle was either sponsoring or participating in. Among the events was a costume party it hosted for adults that was sold out and a local Jewish community center carnival for the community.

“Obviously, everybody is disappointed, but there is a lot of confusion right now; things are changing all the time,” said Vered Merzer-Sapir, IAC regional director for Seattle. “I get updates from the health department, and the guidelines are changing from day to day.

“Until everything is clearer, community health comes first, and we are being guided by the experts at the health department,” she said. “We are looking forward to a joyous holiday—and this is one—but if there’s a danger of people being contaminated, that comes first.”

She noted that her organization is still hoping to deliver holiday activity kits for children ages 3 to 9 in its youth division.

As of Friday afternoon, news reports counted more than 101,000 diagnosed coronavirus cases, with more than 3,450 deaths worldwide. In the United States, some 245 cases in multiple states have caused the deaths of 14 people so far.

A pre-Purim concert scheduled for Sunday afternoon in Baltimore by the Miami Boys Choir, an Orthodox singing group, was canceled on Thursday. It came as the Maryland reported its first cases of the coronavirus and a day after several children were sent home from a local girls’ school after being possibly exposed to the virus.

The same choir also canceled a planned show in Toronto for the following Sunday, March 15. Organizers hope to reschedule the shows later this year.

A Purim event that is annually attended by more than 2,000 people in Lakewood, N.J., was called off earlier this week by organizer and community member Rich Roberts.

“It really does break my heart to cancel the Purim celebration,” he said in an audio recording posted to a community news website, Lakewood Scoop. Owing to the regular “dynamics of the [Orthodox observant] community,” such as men coming together to pray three times a day at the synagogue, “we are in prime position for a virus like this to spread in our communities.”

Rabbis across the spectrum spent much of the early part of the week in deep discussions about the virus and if it rises to the Jewish consideration of pikuach nefesh, “saving a life,” which may allow for leniencies in how a person can fulfill the mitzvah of hearing the reading of the Megillah, the story of Esther.

The Conservative movement’s Rabbinical Assembly stated that “some poskim [the term in Jewish law for a ‘decisor’] have expressed concern about whether one fulfills one’s obligation to hear Megillah reading by doing so via amplification or electronic reproduction, declaring it to be similar to shofar, where the mitzvah is to ‘hear’ the shofar, so the actual sound must be heard. In fact, the mitzvah of Megillah is described in terms of its reading: mikra megillah. Hearing it is just another form of reading it. Hearing the Megillah being read via telephone or live streaming is permitted when necessary, so long as the sound is undistorted, live and not a recording.”

While Rabbi Hershel Schacter, the head of Yeshiva University in New York City and a leading Jewish-law scholar in the Orthodox community, ruled that “in a situation in which it is impossible to have an in-person mikra megillah due to pikuach nefesh considerations caused by the coronavirus, it is permissible to hear mikra megillah via a live phone call or video.”

Yeshiva University itself has been dealing with closures and quarantines among some of its students with at least one having tested positive for the coronavirus, as has a teacher, Rabbi Reuven Fink, who also serves as the religious leader of Young Israel of New Rochelle, N.Y.

For years now, video has been relevant for many American Jews, who view Shabbat and holiday services streamed online by Reform and Conservative congregations for years now, allowing people who are ill, homebound, hospitalized or away from their synagogues to participate virtually and feel connected. That will continue this year with the streaming of the reading of the Scroll of Esther on Purim.

Indeed, a virtual reading, either online or on the phone, may be how some members of Young Israel of New Rochelle are likely to hear the reading this year. About 20 of them have tested positive for the coronavirus, including Fink.

In a letter written to members of his congregation on Friday morning, Fink explained: “We still have a way to go in our handling our communal situation. Together, we can persevere and triumph over these challenges. With our ever-abiding faith in G-d who is the healer, we pray that we, as well as our fellow Americans and the peoples of the world will conquer this disease bimharah, b’yamenu, amen [speedily in our time].” (JNS.org)