'Bob Durst Killed His Wife,' Prosecutor Says at His Trial - The Jewish Voice

‘Bob Durst Killed His Wife,’ Prosecutor Says at His Trial 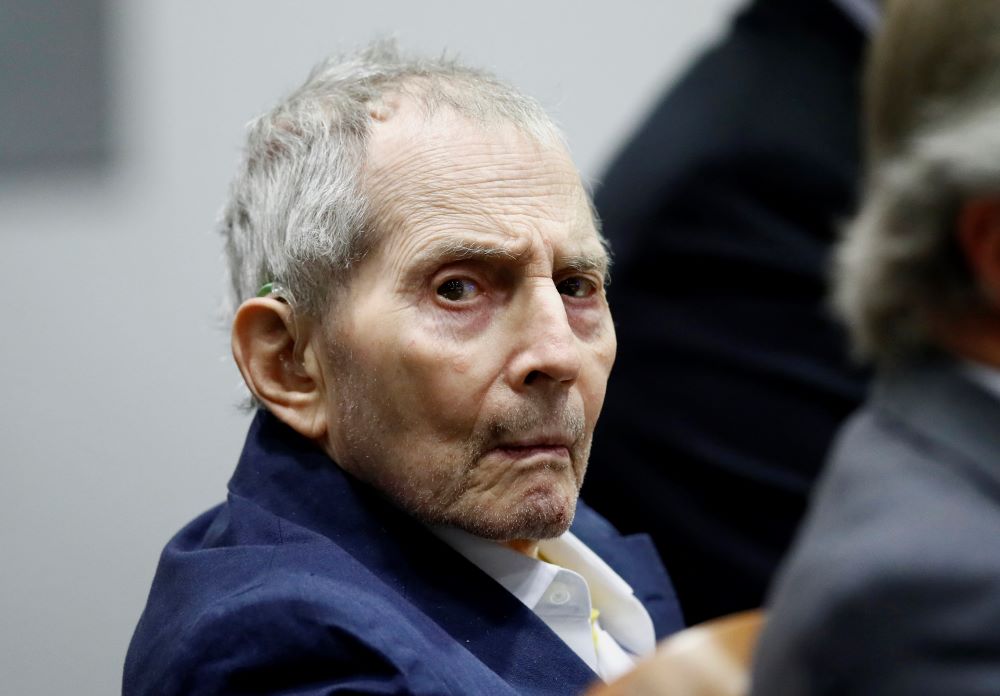 Robert Durst has never been charged in the 1982 New York disappearance of his wife Kathie Durst, who was later declared dead despite no body being found, but on Wednesday a prosecutor in a Los Angeles courtroom repeatedly told a jury that he killed her.

“Bob Durst killed his wife,” Deputy District Attorney John Lewin said at one point during his opening statement at the trial of the real estate heir Durst, who is charged only with the murder of his friend Susan Berman in 2000.

The judge in the case has ruled that the prosecution can provide evidence and say that Durst killed his wife to establish motive for Berman’s killing, and Lewin took full advantage, repeating and emphasizing the statement.

He said it so much that it drove Durst’s attorney Dick DeGuerin to interrupt.

“I’ve got to object to this conclusion that Bob Durst killed Kathie,” said DeGuerin, who said it was an impermissible legal argument and not a presentation of evidence. He was overruled.

It was one of many clashes the two lawyers had on a day that at one point got out of control.

DeGuerin is the attorney who got Durst acquitted in his first murder trial in 2003 in Texas, when Durst testified that he had dismembered and disposed of his neighbor Morris Black, but his death had been an accident in a struggle over a gun.

The 76-year-old Durst, who looked frail and walked very slowly when he entered the courtroom, has denied killing Berman or having anything to do with his wife’s disappearance.

He has long said that on Jan. 31, 1982, the last day anyone saw Kathie Durst, he had spent the day with her at their suburban home in South Salem, New York, then put her on a train to Manhattan, where they had a penthouse and where Kathie had a shift at a clinic in her work as a medical student.

“The evidence will show that there are no witnesses or evidence that Kathie ever got on that train,” Lewin told jurors. “We’ll demonstrate that Kathie Durst never left that house. He came home, and he killed her.”

Lewin gave the jury a chronology of the disintegration and descent into domestic violence of Durst’s marriage to Kathie, a middle-class woman nine years his junior.

The prosecution played several clips of Durst admitting to pushing, shoving and pulling the hair of his wife, taken from interviews Durst did in 2010 for “The Jinx: The Life and Deaths of Robert Durst,” the HBO documentary series that helped lead to his arrest in 2015.

“I remember dragging her by her hair, and grabbing her arm,” Durst said on the video shown to the jury. He also is heard saying, “The hair pulling wasn’t even the worst.”

Lewin also played a clip from a DVD commentary Durst did with the filmmakers of 2010’s “All Good Things,” which starred Ryan Gosling and Kirsten Dunst as characters based Robert and Kathie Durst. In one scene on a rainy night, Gosling terrorizes Dunst so much that she climbs out the window on to the terrace of their Manhattan penthouse.

“This is more or less accurate,” Durst says.

Prosecutors alleged that just days after Kathie Durst’s death, her husband enlisted his best friend Berman to act as his media spokeswoman and to help him cover up her killing, at one point posing as Kathie Durst in a phone call to her medical school to demonstrate that she was still alive.

Prosecutors allege that 19 years later, when New York police had reopened the investigation and were about to interview Berman, Durst shot and killed her.

Lewin gave the jury biographies of Durst and Berman, who met as students at UCLA in the 1960s, casting him as the careless millionaire son of a real estate giant who didn’t believe rules applied to him, and her as the daughter of a Las Vegas mobster who learned from her father that nothing was more important than loyalty.

“She adopted the idea from the mafia that you were always loyal to her friends,” Lewin said. ”She maintained a strict code of honor.”

That code drove her to keep Durst’s secrets, knowledge that would lead to her death, prosecutors said.

The evidence also shows that Berman, who was paranoid and never answered the door for strangers, had allowed her killer into her house in Beverly Hills, Lewin said.

“She was unafraid,” Lewin said as he showed jurors a photo of Berman lying dead in a pool of blood in her bedroom. “She wasn’t scared. And then she was executed.”

The prosecution’s opening statement is scheduled to resume Thursday. (AP)