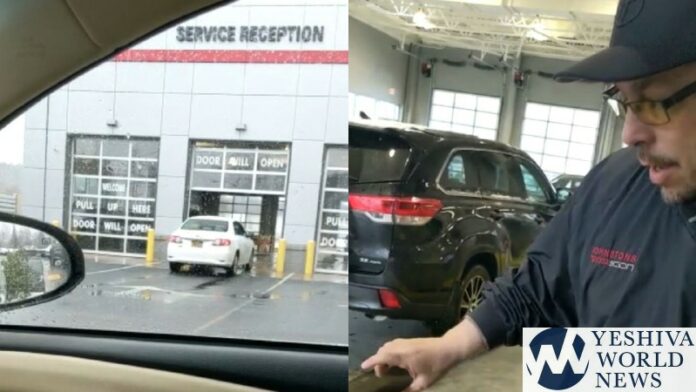 Once again, as has happened throughout our history when there have been pandemic’s, Jews have been blamed for it. We knew it would only be a matter of time, but it happened, and thanks to this brave man, it was captured on video.
A Hasidic man had an appointment on Monday morning to service his vehicle at Toyota in Goshen, New York, but instead of being serviced like the rest of the customers, he was told to leave because he was “spreading the virus”.
The man says that he called Johnston’s Toyota if he can bring his vehicle in for maintenance. He was told it was not a problem, as they are open. He was given an appointment for 9:30 am. The Hasidic man arrived and pulled into the garage. A minute later, he was told by an employee to leave as they are closed due to the coronavirus outbreak.
The man was suspicious and pulled away and watched as one vehicle after the next was allowed into the business for service.
He began video-recording the vehicles going in after being told they had closed. He called the Toyota dealership again and said “I missed my appointment, is there any time slot still available for today? Toyota told him “sure, come at 10:15 this morning”.
He pulled in again, and a female employee told him to leave. He got out of his car and approached a male employee – possibly a manager – and questioned him why he was not being serviced. The manager simply responded “you are spreading the virus”…you gotta go buddy” The man then saw he was being filmed, refused to answer any questions, and quickly walked away.
Say hello to anti-Semitism 2020. (Yeshiva World News)
you can watch the video here from our friends at Yeshiva World News