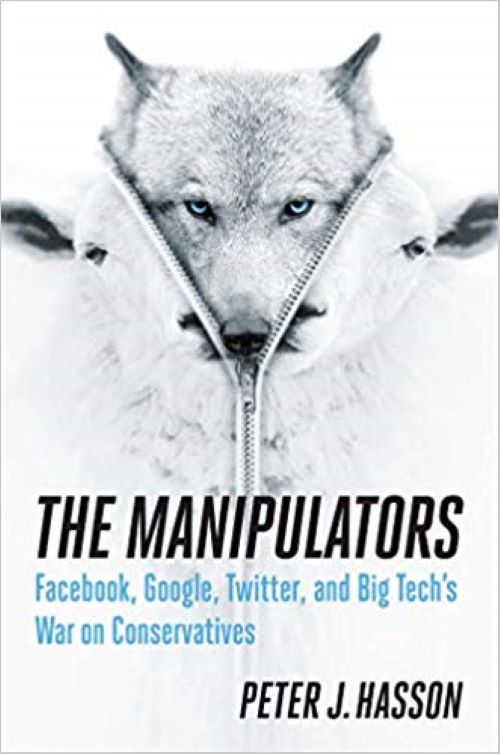 If there is one word to describe The Manipulators, Facebook, Google, Twitter, and Big Tech’s War on Conservatives, the excellent new book from Daily Caller editor Peter J. Hasson, it must be “outrageous.” That is not to say that Hasson’s work—staid and thoroughly researched—is outrageous, but that the story he tells should leave any sensible reader, conservative or otherwise, outraged.

The Manipulators represents one of the first major journalistic investigations of the world of big tech written from the right. Using his own beat reporting and others’ work, Hasson takes us inside the Silicon Valley firms that have come to dominate our lives. His research reveals a disturbing pattern of hostility to and silencing of conservative voices, which he links to an all-encompassing, far-left corporate monoculture. The resultant work should leave any reader, conservative or otherwise, concerned.

The first half of the book focuses on Facebook, Twitter, Google, and Google subsidiary YouTube, with each chapter following the same basic schema. Hasson outlines the enormous power these companies have—7 in 10 Americans use Facebook, three in four use YouTube, etc. He then presents the evidence that their corporate cultures are overwhelmingly left-leaning—the infamous post-2016 “all hands” meeting at Google, e.g., or the hate directed at Facebook VP Joel Kaplan after he publicly supported Brett Kavanaugh. Lastly, he shows how these companies’ implementation of ostensibly neutral speech restrictions have reliably resulted in bans for and silencing of conservatives while hard-left speech skates inexplicably by.

The book’s second act zooms out to look at the way that other organizations cooperate with big tech’s censorship project. Hasson savages supposedly neutral groups like Media Matters and the SPLC that have become “trusted flaggers” for social media sites in spite of their clear left-wing bias. He also looks at the way social media have worked to boost left-wing news sources, like Huffington Post and the now-defunct ThinkProgress, while tipping the scales against openly conservative ones.

The whole picture is, in a word, damning. Can we say for certain that Facebook, Twitter, and Google do not allow their overwhelmingly left-wing employee-base to affect their decisions? Certainly, correlation does not imply causation, but it does waggle its eyebrows suggestively.

Against charges of anti-conservative bias—of which there have been many—social media firms have more or less pleaded incompetence. When conservatives identify patterns of bias against themselves, they argue, what they are really doing is stitching together discrete, unrelated failures of the sort that any person who understands content moderation would expect.

Hasson’s book is subject to this argument, and critics will no doubt make use of it. But, even while The Manipulators does make a compelling case that there is something fishy about big tech, it does not actually need to prove that social media platforms are waging a deliberate war on conservatives. To borrow a phrase from the law, Hasson does not really need to prove overt discrimination, even if he goes a long way toward doing so. Rather, at most The Manipulators needs to prove disparate treatment—that even if Facebook and Twitter and Google are merely incompetent rather than malicious, the net effect is still the silencing of conservatives. Maybe all of the bans are discrete failures, but that leaves unaddressed the question of whether or not the failure rate is too high, or the costs of failure too great.

Hasson’s goal—to document how big tech silences conservatives—is a narrow one, and he fulfills it well. What The Manipulators largely lacks (although not really to its detriment) is an account of what we should do about this. To the extent that Hasson does offer a proscription, it is a personal one, charging readers not to rely on government to control big tech, but to keep fighting the good fight online (and, of course, to report further abuses to him).
Such individual-level approaches are certainly admirable, but they may not be up to snuff. A whole debate currently rages in Washington, as figures on both left and right call for a crackdown on tech firms that they see as examples of monopolistic concentration. Distaste for Facebook is one of the few issues that can even galvanize libertarian conservatives like Sen. Ted Cruz (R., Texas) to suggest that, perhaps, government ought to do something.

The political solutions put forward by these voices—usually the renewed application of antitrust law to Facebook or Google—would make for a bigger hammer, but it is unclear if it is the hammer we need. When it comes to social media in particular, The Manipulators suggests that the problem is not so much economic concentration, but the concentration of speech, and the concurrent power to police it. Over the past decade, much of our democratic life has moved online—but are we better off for it?

Before social media, political conversations were comparatively much harder to have, certainly at the scale that the internet now permits. This meant that they were also much harder to police—the concentration of speech in one place means that it is easier to manage. For much of its early history, the internet was used largely by skilled users with niche interests, able to navigate a more decentralized web. These users tended to prefer a sort of free speech absolutism, which was readily enforced by the ease of “exit” from one chat board to another.

As normal people came online through the late 2000s and 2010s, however, they demanded easy-to-use systems that provided all of their services in one place. They also demanded services that their friends already used—which means that for every user a service got, its probability of getting additional users increased. Firms like Facebook and Google are market dominant in large part because they did such a good job of meeting those demands. At the same time, however, that concentration both created a demand for a more heavily moderated internet—the median user became less interested in radical speech—and made the median user less competent, less willing, and less able to “exit” a platform they did not like.

There are enormous discursive, even pro-democratic, benefits to modern concentration. Twitter disintermediates relationships between politicians and constituents, Facebook permits debate and discussion at a mass scale, and Google collects more information than any republic reliant on literate citizenship has ever had access to.
At the same time, as The Manipulators makes clear, concentration permits the exercise of power by private firms over these same channels of information. Even if the resultant abuses are entirely accidental (and some of them are surely not), the effect is the same. Some voices are silenced not because they are wrong, but because they fail the tests of the algorithmic powers-that-be.

The question then with which The Manipulators should leave citizens and policymakers alike is: Are we better off with this kind of power in the hands of so few? Is American democracy healthier because a handful of firms let us talk to each other, while simultaneously silencing certain voices? Or were we better before, when we perhaps had less conversation, but it was also less readily controllable? On this matter, Hasson is largely silent. From the story he tells, however, the answer seems loud and clear. (Washington Free Beacon)
Charles Fain Lehman is a staff writer for the Washington Free Beacon. He writes about policy, covering crime, law, drugs, immigration, and social issues. Reach him on twitter (@CharlesFLehman) or by email at lehman@freebeacon.com.