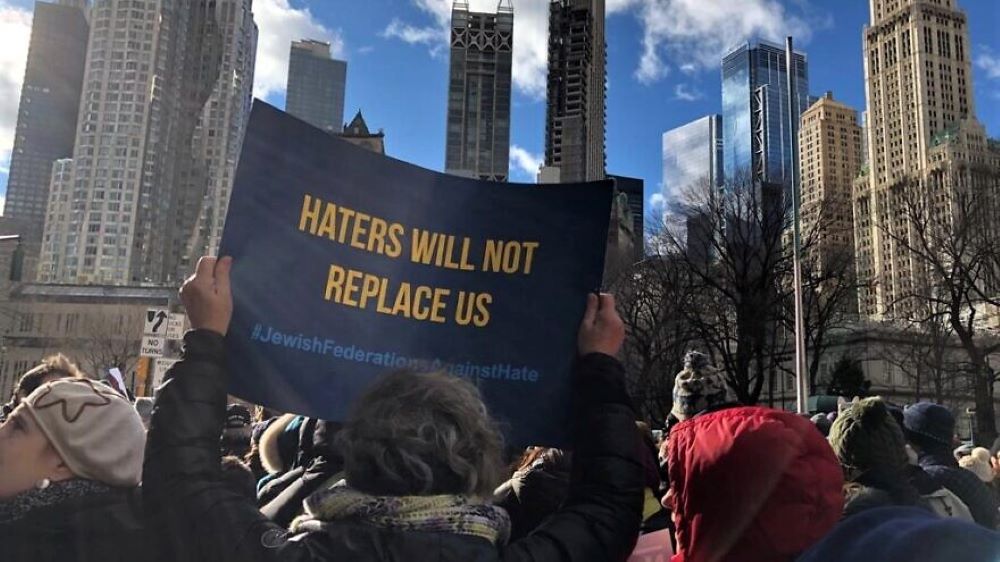 New Exhibit, “The Holocaust: What Hate Can Do” Opens at NYC’s Museum of Jewish Heritage

Drawing on his experience in intelligence and counter-terrorism, Mitchell D. Silber aims to better safeguard Jewish institutions, hardening targets and raising awareness of threats to the community in the Greater New York region.

Mitchell D. Silber, former director of intelligence analysis at the New York City Police Department, started as the executive director of the Community Security Initiative at the UJA-Federation of New York and the Jewish Community Relations Council of New York on Feb. 3 to help secure Jewish institutions in the New York region.

The move was done in partnership with the Paul E. Singer Foundation, Carolyn and Marc Rowan, and several foundations, according to UJA in a statement announcing the move.

In his new role, Silber, 50, will lead a team of an additional five new security professionals to help provide protection to Jewish religious and cultural institutions in all five boroughs of New York City, in Westchester and on Long Island. This will include developing the infrastructure to support and train professionals in synagogues, Jewish community centers and schools.

JNS talked with Silber by phone on Feb 11. The interview has been edited for brevity and clarity.

Q: What are your goals in your new position?

A: My goals are to vastly improve the security profile that covers Jewish life in the Greater New York City Area to include those institutions like synagogues, schools, camps, JCCs, as well as the Jewish security in the streets in and around those institutions. And really to reduce the climate of fear that unfortunately exists now.

Q: Why did you decide to take on this challenge?

A: I’m not really a person who sits on the sidelines watching the action happen. I’m much better as a participant. After 9/11, I left a career in corporate finance to get into the world of counterterrorism to protect in the city. I had a societal obligation to step up, so this was a very similar decision.

A: That’s a difficult question to answer because there are multiple elements to it. On one side, it’s what the threat is. After 9/11, we knew there was a threat from Al-Qaeda and ISIS, and their homegrown followers. We’ve always known there’s been an Iran, Hezbollah threat against Jewish institutions in the United States.

After Pittsburgh and Poway, our eyes were shocked open to see there’s a right-wing extremist threat, a white-supremacist threat that now targets Jews. After Jersey City, we learned that there was a—fringe as they may be—Black Israelite threat against Jewish communities in New York, plus neighborhood anti-Semitism, which is the term I use to talk about the phenomenon that is happening in Brooklyn, like that Hanukkah week in December.

The security situation is based on the threats. The threats are a broad spectrum; there are lots of them, and they’re all very different.

And there’s the question of what do we do on the defensive side to protect against them.

The Community Security Initiative is the first step in better safeguarding our institutions, hardening the targets and make our communities more aware of what they need to be doing to protect themselves. We’re just starting this process.

Q: Are the threats against Jews more physical than verbal, vice versa or equally both?

A: Generally, when one looks at anti-Semitic incidents, whether it’s in New York or Europe, the pool of incidents when you include verbal is very large, and physical is a smaller subset of that, so that’s just the nature of these type of things. Fewer people are actually going to act on their thoughts in a violent way. But those are the ones I’m most concerned about.

I’m concerned about the physical security of Jews in the Greater New York City area from attacks, from assaults. Preventing people from saying nasty things, I wish it wouldn’t happen but that’s less of a priority for me.

Q: But can’t verbal attacks evolve into physical attacks in which we should stop the threats before they get worse?

A: That sounds good, but the truth of the matter is that you can’t stop someone from a verbal threat. That’s not going to be a focus on my effort. If I focus on everything, I’m not going to accomplish anything. So what we’re focusing on are the physical threats that hurt or damage people. There are other organizations like the Anti-Defamation League that fight anti-Semitism.

Q: In your experience, what has led to this uptick, specifically in anti-Jewish crime? Have you seen other ethnicities targeted in New York as well these past two years?

A: I don’t know the reasons to explain the uptick in anti-Semitism in New York. I’d like to know what’s driving it, where are the catalysts.

Countrywide, we live in a time when conspiracy theories run rampant. Jews are, one way or another, targeted as being responsible. We’re in a national mood, post-2008 economic crisis, where it’s very much anti-economic elites, and Jews are nationally assigned a place among the economic elites even though that’s not entirely true.

We’re also in an anti-immigrant mood in the country and even though Jews aren’t the immigrants these days, Jews, as a community having been immigrants throughout our history, are sympathetic to immigrants, and we are often seen as the enabler of immigrants.

Robert Bowers struck out against the Jewish community in Pittsburgh because they were associated with the Hebrew Immigrant Aid Society, which was no longer helping Jewish immigrants in the United States, but other immigrants. In his apocalyptic race war, Jews were enabling the browning of America, and therefore, we were a feared target.

A: Their actions since the end of the year are to be commended, whether it’s the governor for releasing funds that had been allocated for Jewish security, as well as releasing new funds for houses of worship that the Jewish community was seeking. The mayor has been supportive in allocating additional police to the neighborhoods where a lot of these anti-Semitic events occurred.

There is more work to be done, but we’re certainly getting indications that Albany and City Hall realize the threat and want to be helpful in whichever ways they can.

Q: The newly implemented New York bail reform has come under fire from the Jewish community for releasing suspects accused of committing anti-Semitic attacks. What’s your stance on the law?

A: The legislators and the activists who were for bail reform were all with the best intentions, but the way the legislation ultimately came out had flaws. Certainly, we’ve seen those flaws with examples of Tiffany Harris, who assaulted and cursed at three Jewish women in an anti-Semitic attack, and had to be arrested two more times before City Hall decided to intervene. Otherwise, she would have been released another time. So that can’t be the way the designers of this legislation expected it to function.

The question is how can you reform the law in a way that keeps elements of it that were useful, but actually maintain some kind of law-enforcement deterrence that doesn’t encourage people because they think they’re going to be released immediately.

Q: How would you reform the bail law?

A: One way that strikes me is if the infraction has anything to do with hate and if it’s any type of hate-related criminality, I would think there might be some kind of carve-out, and there’s a higher threshold before someone is released and back on the streets.

Q: What more can our elected leaders do? Increase funding for the Nonprofit Security Grant Program?

Q: Recipients of the Nonprofit Security Grant Program can use up to 50 percent of funds for armed personnel. If they want to use more, they need a waiver from FEMA. Should Congress allow recipients to use up to 100 percent of the money towards such a purpose?

A: When you’re protecting an institution, there are lots of elements. Armed guards are one element of it. Hardening a door, as basic as it may sound, is critical. We see in Germany, this individual attack the Halle synagogue on Yom Kippur. The reinforced door that had been paid for by Jewish organizations saved the day. Similarly, you want to have that blast-mitigation, bullet-resistant, shatter-proof film on the glass on windows.

So there are other elements to it besides armed guards that are as equally as important. We don’t want to neglect infrastructure security.

Q: Besides the job requirements, how has your new role compared to being in the NYPD?

A: In some ways, there are a lot of similarities. Once again, it’s sort of protecting New York from a wide spectrum of threats and knowing as much as we can about what those threats look like will better inform our efforts.

Here, we’re a unit, a team of seven, so we’re going to have to punch above our weight to get it done. It’s a little bit of a startup; the NYPD is obviously not a startup. We have our seed funding. If we can deliver results this early, we’ll be able to increase the resources that we can draw upon and build out more holistically.

Many of the same threats that I dealt with at the NYPD in the counterterrorism world are similar threats we have to deal with in the Jewish security world.

Q: Besides the common “If you see something, say something,” what advice do you have for the Jewish community when it comes to being vigilant?

A: One of the things I’d like to put in place is classes not only where people can learn Krav Maga as part of self-defense, but also situational awareness.

Everyone in the community is going to have to play a role in terms of their awareness, noticing things. “If you see something, say something” is great, but we actually need a higher level of understanding of what it is that people should be looking for.

Hopefully, we’ll be able to roll out classes in the Greater New York Area that can provide guidance of what might be suspicious that you might not otherwise think and the mechanism for reporting it, so that we can have better situational awareness and maybe advanced warning if something comes our way.

Q: Is there anything else you wish to add?

A: In this new role, in the Community Security initiative, we’re going to need alliances because we can’t do it all on our own, and there are two organizations that we’re working on setting up alliances with.

One is called the Community Security Service. It’s an organization that provides volunteers who can augment the physical security of institutions where there are another set of eyes and ears that know about surveillance and counter-surveillance, and also little bit about self-defense. We plan on partnering with them in a big way in the Greater New York City Area because we think they’re an important force multiplier.

The second is the Anti-Defamation League and its Center on Extremism, which has a robust online analysis capability. They’ve helped contribute to the identification of half-a-dozen people in the United States since Pittsburgh who gave indications that they were preparing violent attacks against Jews and others. We want to be a beneficiary of their intelligence flow. (JNS.org)