An ancient synagogue in Alexandria, Egypt has been reopened by the government.

The process actually began years ago. Sadly, there are no longer very many Jews there to enjoy it. Most of Egypt’s Jews took it on the lamb over six decades ago during times of friction between Egypt and Israel.

In the twentieth century, Jews in Egypt faced pogroms, looting, murders and eventually expulsion, with many in the community finding refuge in the Jewish state, according to a World Israel News report.

Renovation work on the Eliyahu Hanavi synagogue, built in 1881, started in 2017, a year after the two-story building suffered a partial collapse. The location was the home to a previous synagogue that historians say was erected in 1354 CE.

The synagogue is distinctive architecturally, as well, known for its ruby columns and marble floors. The recent rededication of the building took time, and is the result of three years of construction work and several million dollars.

The Eliyahu Hanavi synagogue is said to be the last active Jewish house of worship in the coastal city of Alexandria, a sprawling metropolis that at one time was home to as many as 40,000 Jews. Today “there are a handful of Jews living in Alexandria and estimates put the number of Jews living in all of Egypt at fewer than 20,” reported JTA.

WIN reported that according to Israel’s Museum of the Jewish people, “Following the United Nations decision [to] partition [the land of] Israel (November 1947), the Jews of Egypt became hostages of the authorities, their property was confiscated and many were arrested. About half of the 80,000 Jews emigrated to Israel and in 1956 only about 40,000 people remained. Following the Sinai campaign (1956) many more escaped to Israel. In 1967, only about 2,500 Jews remained in Egypt. When the Six Day War broke out, all Jewish men were arrested. They were released and expelled from the country in 1970. In 1996, only some 100 Jews were living in Egypt, in two communities, Cairo and Alexandria.”

In 1979, Egypt became the first Arab country to make peace with Israel.

The damage to the synagogue has been going on for some time. “Rainwater began leaking through the roof into the women’s section of the synagogue about eight years ago,” the French news agency AFP reported. “The synagogue was forced to close about three years ago after a staircase and part of the roof collapsed.”

Last month, the Antiquities Ministry said in a statement that the renovations included the structural reinforcement of the synagogue, the restoration of its main facade, decorative walls, and brass and wooden objects, and the development of its security and lighting systems. 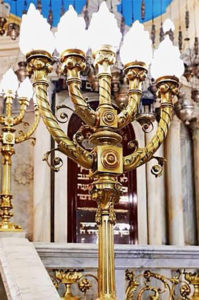 Magda Haroun, the leader of Cairo’s shrinking Jewish community – only three Jews showed up for the festivities — noted during the ceremony that she was “very proud of what my country has done, and it symbolizes living together, today there is no difference between Egyptian Muslim, Christian and Egyptian Jew. It is recognition that we have always been here and that we have contributed to a lot of things just like any other Egyptian.”

“With tears in her eyes, she said that she had been struggling for years to preserve Jewish heritage in Egypt and she never thought that the Egyptian government would spend the money to rebuild the landmark Sephardi house of prayer,” The Jerusalem Post reported. The Eliyahu Hanavi synagogue, “with green and violet stained-glass windows and towering marble columns, is one of two remaining Jewish houses of worship in Alexandria.”

Enjoy A Picturesque Fall 2020 Staycation at the Southampton Inn

A New Dawn in Dubai