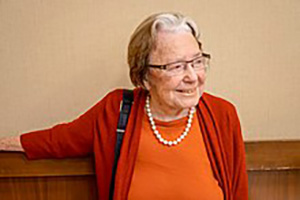 Myriam Sarachik has known horror – having to escape from Nazis as a youngster in Belgium, enduring the murder of her daughter in 1970 following a kidnapping. And how she knows glory, having been selected to receive the 2020 APS Medal for Exceptional Achievement in Research for her “fundamental contributions to the physics of electronic transport in solids and molecular magnetism.”

An APS Fellow, Sarachik is Distinguished Professor of Physics at City College of New York. She was President of APS in 2003 and received the APS Oliver E. Buckley Condensed Matter Physics Prize in 2005.

“Myriam Sarachik has been one of the world’s leading experimental condensed matter physicists for over a half-century,” said APS President-Elect Philip Bucksbaum, chair of the selection committee. “Her outstanding contributions helped to shape our modern view of many collective effects in solids, including the Kondo effect, heavy fermion physics, disordered 2-D systems, and strongly-correlated electron systems. I am very pleased that she will receive the APS Medal for Exceptional Achievement in Research. I’m especially pleased that this honor goes to someone who has also been so active in promoting the core values of APS. Not only is Myriam a past President of the Society; she is also well-known for her efforts to defend human rights and the principles of diversity and inclusion in physics.”

The Medal for Exceptional Achievement in Research is the largest APS prize to recognize researchers from all fields of physics and is funded by a donation from entrepreneur Jay Jones. Previous recipients were Edward Witten (2016), Daniel Kleppner (2017), Eugene Parker (2018), and Bertrand Halperin (2019).

“I’m so pleased that Myriam has been selected for the APS Medal, which is our highest honor,” said Kate Kirby, APS CEO. “Her research has been at the frontiers of condensed matter physics and her life of service to the physics community is an example for physicists everywhere.”

“I am absolutely elated to receive this award from APS,” said Sarachik. “As one of the very few women physicists when I was young, I fought hard to enter and to stay in the field. Little did I dream that I would become President of the APS (in 2003) leading and shaping policy for the society and traveling throughout the world to represent American physics, or that I would win this incredibly prestigious prize now. The message to my young colleagues is that, with strong commitment and hard work, they too can exceed their own expectations.”

The formal award will be made at a ceremony in Washington, DC, on January 30, 2020. In addition, Sarachik is invited to give a presentation on her work at the 2020 APS March Meeting in Denver (March 2-6). The Medal is accompanied by a prize of $50,000.