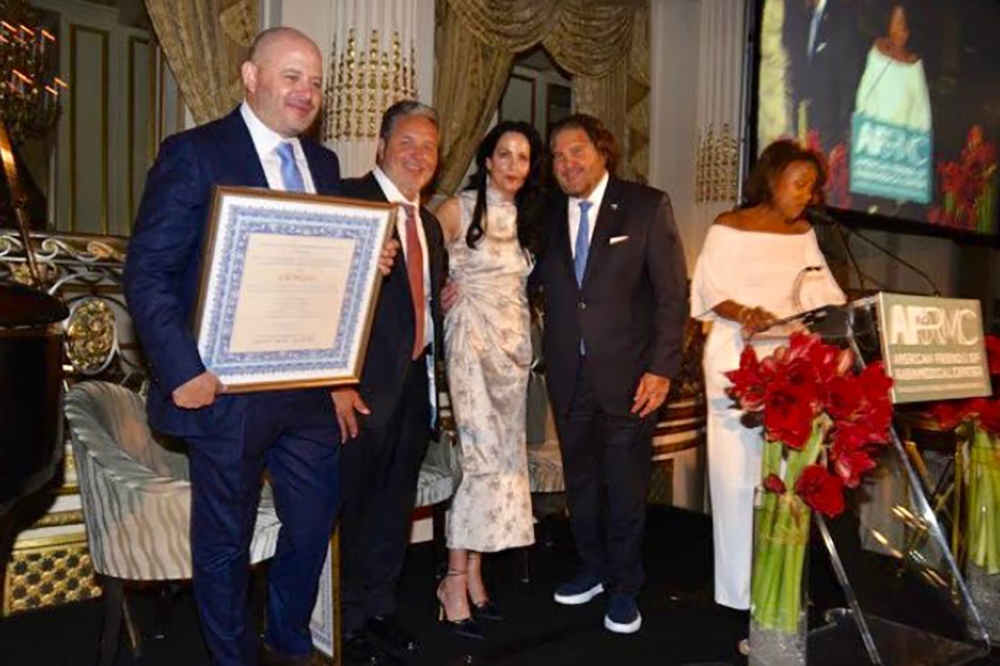 American Friends of Rabin Medical Center (AFRMC) held its 20th Anniversary Gala at the Plaza Hotel on Monday November 11th with cocktails beginning at 6 PM. This evening gathers the who’s who of the real estate world as law firms Fried Frank, and Kramer Levin took tables along with developers Joseph Moinian, Michael Shvo and CBRE chairman Stephen Siegel who joined 450 others for an impactful evening. Rabin Medical Center, Israel’s largest medical institution, is committed to excellent patient care, medical research and education. AFRMC has funded projects such as a new Genitourinary Oncology Unit at the Davidoff Center in Israel; and is in the process of developing a 215,000 square foot Heart and Neuro-Science Center to provide one-stop shopping for patients.

The evening which cost $1,000 per ticket, cheap for a Plaza dinner, gathered the best and brightest for a night that was both informative and sobering as the scourge of cancer was referenced numerous times throughout the night. Honorees Dr. Stanley Fischer, Warren and Faith Diamond, Eli Weiss and Jorge Madruga joined guests of honor New Jersey Governor Phil Murphy, Dr. Kenneth Offit, Chef David Burke and Master of Ceremonies Magalie Laguerre-Wilkinson. The dinner’s caterer David Burke- an artist, entrepreneur and inventor-assured me the food was 100% kosher collaborating with kosher caterer Mark David for a one-night-only partnership that produced a sophisticated meal of fish and artichoke salad.

The cocktail hour was replete with men in suits socializing enthusiastically with their colleagues and co-workers. At 7 PM the program began with Governor Phil Murphy praising both John F. Kennedy and Yitzhak Rabin, as role models who had guided the trajectory of his life despite having never met them. He lauded the high quality medical care of the Rabin Center saying their cutting edge technologies had helped save lives. Ten minutes later Murphy and his secret service detail were out the door as he had numerous engagements to attend. Honoree Dr. Stanley Fischer who was given the Yitzhak Rabin Global Financial Leadership Award said he had only three minutes to speak and urged American Jews to assist Israel remarking that the United States was not a guaranteed supporter. Fischer was Vice Chairman of the Federal Reserve from 2014-17 and is credited with having played a key role during his 2005-13 tenure as governor of the Bank of Israel in minimizing the global financial crisis’s impact on the Israeli economy. His commitment to Israel has been steadfast over the years appearing at numerous functions and conferences.

Construction magnate Eli Weiss, the grandson of Holocaust survivors, accepted his award by thanking his business partner and co-honoree, Jorge Madruga, for telling him early in their careers “it’s easy to be the bad guy but doing good things takes hard work.” He remarked the only item in their lexicon was family and friends. Similarly stalwart community activists, Warren and Faith Diamond, who own 15 Self-Storage chains, were introduced by CBRE Chairman Stephen Siegel, who joked that his wife Wendy utilized all 15 units. Faith Diamond gave a moving speech sadly recounting the death of her father to colon cancer while her husband Warren lost his wife of 33 years at the age of 48 to breast cancer. Faith paid tribute to veterans and praised her father for fighting valiantly in World War II. She also thanked him for fixing her up with her current husband who she said was the best husband, stepfather, and son-in-law and someone whom she wanted to be with eternally. She encouraged the audience to participate in the “5k Schlep” which raises money for breast, ovarian and prostate cancer and which will take place in Santa Barbara in January. Warren noted that 200 of his friends had joined him for the evening-an astonishing number-as he and his wife along with David and Leslie Schwartz were donating the BRCA Multidisciplinary Clinic to study breast cancer mutations and assist in patient care. At 10 PM award-winning singer Liz Callaway entertained the audience as guests headed to the foyer for desserts, a gift bag, a chocolate ornament and a t-shirt- a welcome conclusion to a dynamic evening.