Will a Hotel for the Homeless Be Built on Coney Island Avenue and Avenue T?

Is the Sephardic Jewish neighborhood of Gravesend prepared to deal with the very real possibility of a hotel being built in their beloved enclave that will be used as a homeless shelter? It seems that such a worrisome scenario may take on more credibility than ever thought possible.

In a neighborhood that has carved out a distinct niche as a tight-knit community that prides itself on family values, education and religious sustenance, it becomes an onerous task to even entertain the notion that the denizens of this affluent area would not offer some fierce pushback to a suggestion of placing a residence to house the homeless directly in the middle of the community that they worked so hard to build.

When Jewish Voice publisher David Ben Hooren originally caught wind of the fact that a hotel would possibly be constructed for the purpose of housing the homeless at 2320 Coney Island Avenue, (which is on the southwest corner of Avenue T and Coney Island Avenue) he immediately contacted elected officials and members of the local community board.

“I contacted our local city councilman, Mark Treyger, as well as city councilman Chaim Deutsch and  community board 15 that serves the area. No one had any knowledge whatsoever of a possible homeless shelter being erected on that desirable corner property,” declared Ben Hooren.

According to a short report which recorded a property filing in July of 2019 on a web site that lists possible real estate acquisitions, it says that “permits have been filed for a four-story hotel at 2320 Coney Island Avenue in Sheepshead Bay, Brooklyn. Located on the corner of Avenue T and Coney Island Avenue, the lot is five blocks west of the Avenue U subway station, serviced by the Q train.”

Nehalkumar Gandhi under the 2320 Coney LLC is listed as the owner behind the applications.

The report added: “The proposed 46-foot-tall development will yield 30,240 square feet, with 20,806 square feet designated for commercial space. The building will have 88 hotel rooms, with an average unit scope of 253 square feet. The concrete-based structure will also have a cellar and a 48-foot-long rear yard. Michael Kang Architect is listed as the architect of record. Demolition permits will likely not be needed as the lot is vacant. An estimated completion date has not been announced.”

Residents of the Gravesend section of Brooklyn recall that this vacant piece of prime corner property was the site of a yeshiva groundbreaking about a decade ago. According to a prominent community member and esteemed philanthropist who spoke to the Jewish Voice on the condition of anonymity, he recalled the event with clarity. “About ten years ago, the corner of Avenue T and Coney Island Avenue was the site of a groundbreaking ceremony. A yeshiva known as TAB was to be erected on this empty lot, but due to financial difficulties, the property had to be sold to someone else.”

The community member added, “This corner property would be an ideal site in which to build an apartment building that would provide affordable housing to young Jewish couples who have just recently gotten married and who wish to live in their beloved community; close to their cherished families and lifelong friends.”

Safety concerns remain paramount for community members as they point to the fact that the vacant property is only a stone’s throw away from the Bet Yaakov Ateret Torah yeshiva for girls that is located on Coney Island Avenue between Avenues R and S,  Yeshiva Darchei Emunah for boys on Coney Island Ave, near Avenue W well as being located only a few feet from three synagogues on Coney Island Avenue, near the corner of Avenue T. The site is also in dangerously close proximity to the future home of the synagogue that will be built for the congregation of Rabbi Eli Mansour, that is now located on Avenue R and ocean Parkway as well as being near the iconic Shaarei Zion synagogue and the Sephardic Community Center, both of which are located on Ocean Parkway.

“The truth is, this vacant property is literally enveloped by yeshivas and synagogues, and to even consider placing a hotel for the city’s homeless population right in the heart of this community is beyond ludicrous.  It is analogous to trying to build a homeless facility directly on Fifth Avenue in Manhattan near Central Park or even attempting to construct a similar structure for the homeless right in the middle of the Borough Park section of Brooklyn that is densely populated with yeshivas, schools, synagogues and other community oriented institutions, “ said the community member.

According to the previously referenced web site, the current owner of the property is Nehalkumar Gandhi, a New Jersey developer, who has spent a number of years specializing in purchasing vacant lots or dilapidated buildings in predominantly minority neighborhoods of Brooklyn and Queens and has  transforming them into hotels that are used as homeless shelters.

An August 2019 report in the Wall Street Journal indicated that New York City Mayor Bill DeBlasio has vowed to significantly reduce the city’s homeless population by 2022 and “has a mandate to spread shelters across neighborhoods in all boroughs, a response to criticism that shelters have been typically concentrated in the poorer areas of the city. Since 2014, spending on shelters has nearly doubled to $1.9 billion, according to New York City Comptroller’s office. Overall, the city spends about $3 billion on homelessness annually.”

Theresa Scavo, the chairperson of community board 15, which oversees the area, told the Jewish Voice that residents have voiced their concern to her about the future of the property in question but as of yet  no definitive answer has been received. “What I do know and what I can tell you is that in July of this year, the New York City Department of Buildings had declined an application to have a hotel built on this lot. As the chairperson of community board 15, I can call Mr. Gandhi and ask for a meeting about this, but I thought it would be more impactful for the community if our local city councilman Mark Treyger asked for a ‘meet and greet’ with Mr. Gandhi so we can come to a better and clearer understanding of what he proposes to do with this lot of land.”

Ms. Scavo added that while this meeting has not been arranged as of yet, it is definitely being planned and she expects quite a bit of community involvement in any project that is being considered for this prime property.

“Just the other day, I learned that demolition of a small parking garage on this property is expected to take place in the next few days, so that would mean that the owner is planning to start building on it in the near future and we most definitely want to have our say in what happens to that property, “ Ms. Scavo said.

The Jewish Voice also contacted the offices of New York State Assemblyman Stephen Cymbrowitz who represents district 45 for his comments on the property.  Adrienne Knoll, the Director of Communications for Assemblyman Cymbrowitz sent an e-mail statement regarding the current status of the vacant property.

“The plans filed are for a hotel which can be built as of right. The plans have not yet received approval from the Department of Buildings. In order for the hotel to be used as a homeless shelter, there would need to be public input, at minimum with a public hearing at the community board, but we don’t have any indication that this location will be used to serve the homeless. The City indicated in June that it will be phasing out hotel use for housing the homeless. I will continue to monitor this situation for further developments.”

Several attempts were made to reach Councilman Treyger’s office as a representative is scheduled to discuss the matter with the Department of Buildings. 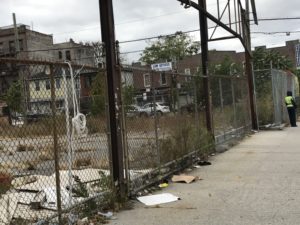 Community members have reached out to the Jewish Voice about their overwhelming concern. “This community will not take this issue lying down. If G-d forbid, the city should approve a homeless shelter at this site, every single person who lives here will be up in arms and we have every intention of mobilizing all residents in a concerted and unified effort to convince the city that this idea is just not feasible in any manner, “  the community member said.