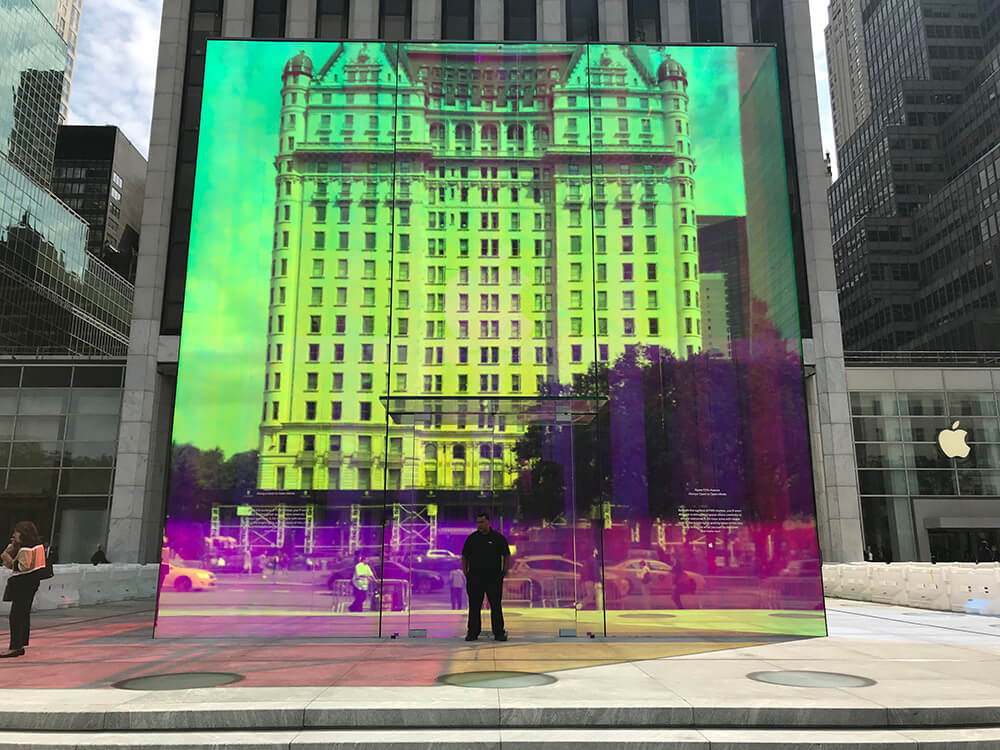 The cube is back.

It’s the 32-foot glass cube surrounding the entrance to Apple’s Fifth Avenue store, reportedly its most profitable. It has been missing for two years due to renovation of the store itself. It was unveiled on Friday, and looks different than people remember.

The cube now offers rainbow-tinted rather than clear glass panels. But no fear – the colors will reportedly be removed before the outlet reopens.

“The store, Apple’s only 24/7 location, was originally scheduled to reopen last year. Apple declined to give a new forecast for the opening date, but said that it would be “soon,” reported the New York Post. “The iconic glass structure, whose design was meticulously overseen by Jobs, has been a major tourist destination in New York since it first opened in 2006. It was dismantled in January 2017 when Apple announced that it would be giving the store a major facelift. The new retail space will reportedly have twice the square-footage of its predecessor, and will see dozens of skylights placed on the Fifth Avenue Plaza to allow natural light into the basement store.”

Some see the multi-colored cube as more of a diversion from some unpleasant publicity. Apple on Monday, September 9, “denied most of the accusations leveled against it and manufacturer Foxconn by New York-based watchdog group China Labor Watch regarding its Chinese operations, and how workers who assemble iPhones are treated,” reported thestreet.com. “In a report published on Sunday, China Labor Watch accused the iPhone maker and its production partner of numerous labor-law infractions at its factory in Zhengzhou, China, including that more than half of the workers there are temporary, or “dispatch.”

“Apple denies the allegations, saying it has confirmed all workers “are being compensated appropriately, including any overtime wages and bonuses, all overtime work was voluntary and there was no evidence of forced labor,” thestreet.com continued.

“The claims came from China Labor Watch, which issued the report ahead of an Apple event on Tuesday to announce new iPhones,” Bloomberg reported. “The non-profit advocacy group investigates conditions in Chinese factories, and says it has uncovered other alleged labor rights violations by Apple partners in the past.

“For its latest report, CLW said undercover investigators worked in Foxconn’s Zhengzhou plant in China, including one who was employed there for four years,” Bloomberg added. “One of the main findings: Temporary staff, known as dispatch workers, made up about 50% the workforce in August. Chinese labor law stipulates a maximum of 10%, CLW noted.”