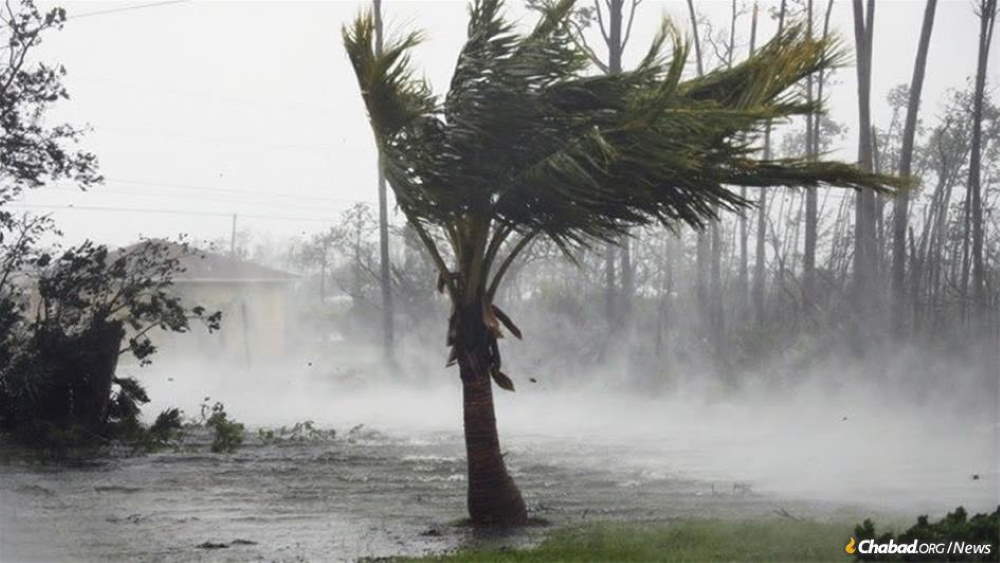 After days of uncertainty, Hurricane Dorian has made its move close to the coasts of North and South Carolina. As torrential rains, hurricane-force winds and life-threatening storm surges began to take their toll, Chabad emissaries spent the morning reaching out to residents, especially the elderly and homebound.

With the hurricane regaining strength with winds in excess of 110 miles per hour, Rabbi Yossi Refson, co-director with his wife, Sarah, of Chabad of Charleston and the Low Country reported that in his neighborhood of Mount Pleasant, S.C., trees were down and the power was out. “It’s been raining hard and we are just waiting for high tide early this afternoon to see what that will bring,” Refson told Chabad.org. Currently, he continued, “The main flooding is downtown. We are closer to the beach but higher up — not on low land like the downtown area.”

He was spending his morning on the phone with congregants checking in to make sure everyone was OK and see if they need anything. “People just want to know that someone is there checking on them, especially the elderly whose children and family may not live nearby,” he said.

Refson added that elderly residents have a harder time leaving their home and dealing with change, and by calling and checking on them, they are reassured that “someone is close by who can help if they need anything.”

Hurricane Dorian’s fury comes nearly one year after Hurricane Florence left parts of Wilmington, N.C., under feet of water. As of mid-day Thursday, the storm was just starting to unleash its fury there. “We are starting to feel it now. Hoping for the best,” Rabbi Moshe Leiblich, co-director with his wife, Chana, of Chabad of Wilmington wrote in a text.

Leiblich also spent time Thursday reaching out to community members, most of whom have stayed in their homes. He said that so far people seemed to be doing just fine.

“Last year the rivers were swollen and Florence brought tons of rain and hung around causing the rivers to swell,” he said on Wednesday, noting, “I am cautiously optimistic that it won’t be as severe.”

Hurricane Dorian has already left deadly and unprecedented destruction in its wake after the Category 5 hurricane stalled over the northern Bahama islands for more than two days. Authorities have confirmed 20 deaths there, though, that number is expected to rise.

Chabad houses throughout South Florida, who are no strangers to hurricanes and who were spared from Dorian’s wrath, are collecting critical supplies for residents of the Bahamas. Among the items being requested are baby items, toothbrushes and toothpaste, first-aid kits, duct tape, medical supplies, chain saws, air mattresses, tents and water. (To help with the relief effort, visit Chabad of the Bahamas’ hurricane relief page here.)

With things in the Carolinas still in flux, Refson said, “At this stage, the storm is still in progress so it’s hard to know what we will need. It all depends on how bad the flooding is. Once we see the damage, we will be able to assess where we’ll be able to be of help, and we have volunteers who are able and ready to assist.” (Chabad.org)

Pelosi and Mnuchin Have ‘extensive’ talks on COVID Relief