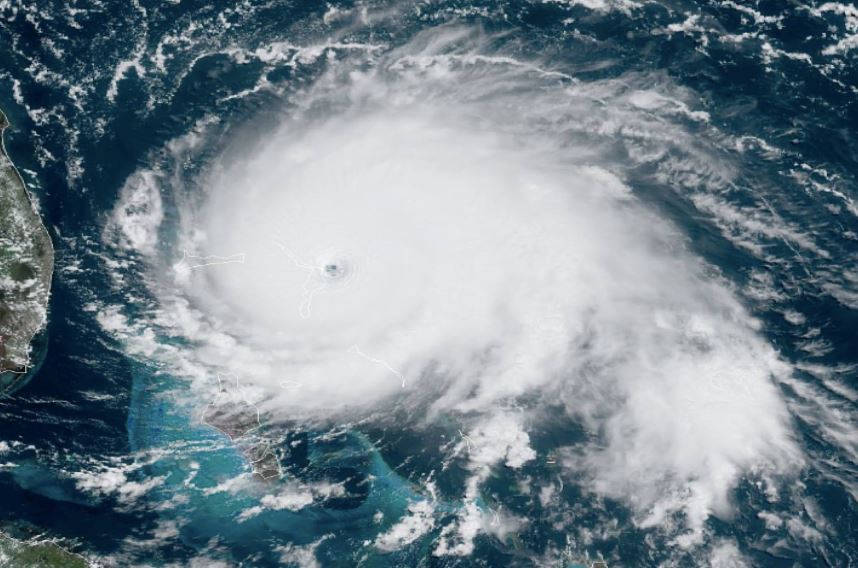 Slamming the Bahama Islands for over 36 hours in 185 mph winds and gusts of over 220 mph, Hurricane Dorian showed no mercy as this 2019 storm battered the Grand Bahama Island and its flagship town, Freeport on Monday.

Forecasters called the storm “catastrophic” and “devastating.” They predicted Dorian would continue to pound the island throughout much of the day with drenching rains.

The winds diminished slightly from earlier Monday, now making Dorian a Category 4 storm, downgraded from the severest Category 5 classification on the Saffir-Simpson scale of hurricane intensity.

The only recorded storm that was more powerful than Dorian was Hurricane Allen in 1980, with 190 mph winds, though it did not make landfall at that strength.

At least 5 deaths were blamed on the menacing storm; including that of a 7-year-old boy in the Bahamas.

AP reported that officials said they received a “tremendous” number of calls from people in flooded homes. A radio station received more than 2,000 distress messages, including reports of a 5-month-old baby stranded on a roof and a grandmother with six grandchildren who cut a hole in a roof to escape rising floodwaters. Other reports involved a group of eight children and five adults stranded on a highway and two storm shelters that flooded.

On Sunday, Dorian churned over Abaco Island with battering winds and surf and heavy flooding.

A spokesman for Bahamas Power and Light told ZNS that there was a blackout in New Providence, the archipelago’s most populous island. He said the company’s office in Abaco island was flattened.

The National Hurricane Center said the storm is continuing to slowly edge west at 2 kilometers an hour. At last report, Dorian was about 180 kilometers east of West Palm Beach, Florida.

The International Federation of Red Cross and Red Crescent Societies said an initial assessment by authorities and its officials showed extensive damage on Grand Bahama and Great Abaco islands, with as many as 13,000 houses that may have been badly damaged or destroyed. Storm surges reached seven meters above normal tide levels.

The international bank UBS estimated that the storm could cause $25 billion in damage.

Bahamian Prime Minister Hubert Minnis broke down in tears at a news conference Sunday, calling it “the worst day of my life.” He said many Bahamians had not heeded warnings to evacuate, refusing to leave their homes.

“I can only say to them that I hope this is not the last time they will hear my voice,” he said.

In the US authorities ordered more than a million evacuated from coastal regions in Florida and further north in the states of Georgia and South Carolina. Nearly 1,000 flights were canceled in Florida as the storm edged closer.

“This looks like it could be larger than all of them,” Trump said Sunday during a hurricane briefing in Washington at the Federal Emergency Management Agency.

“Although gradual weakening is forecast,” meteorologists said, “Dorian is expected to remain a powerful hurricane during the next couple of days.”

“A slow westward to west-northwestward motion is forecast during the next day or so, followed by a gradual turn toward the northwest and north,” said the National Hurricane Center in its most recent advisory. How much Dorian turns and how quickly will determine the extent of its effects on the U.S. mainland. For now, forecasters have put hurricane warnings in place for about half of Florida’s east coast.

Jared Moskowitz, director of the Florida Division of Emergency Management, said, “Hurricane Dorian is the strongest storm to ever threaten the state of Florida on the east coast. No matter what path this storm takes, our state will be impacted. We will continue to work around the clock to prepare.”