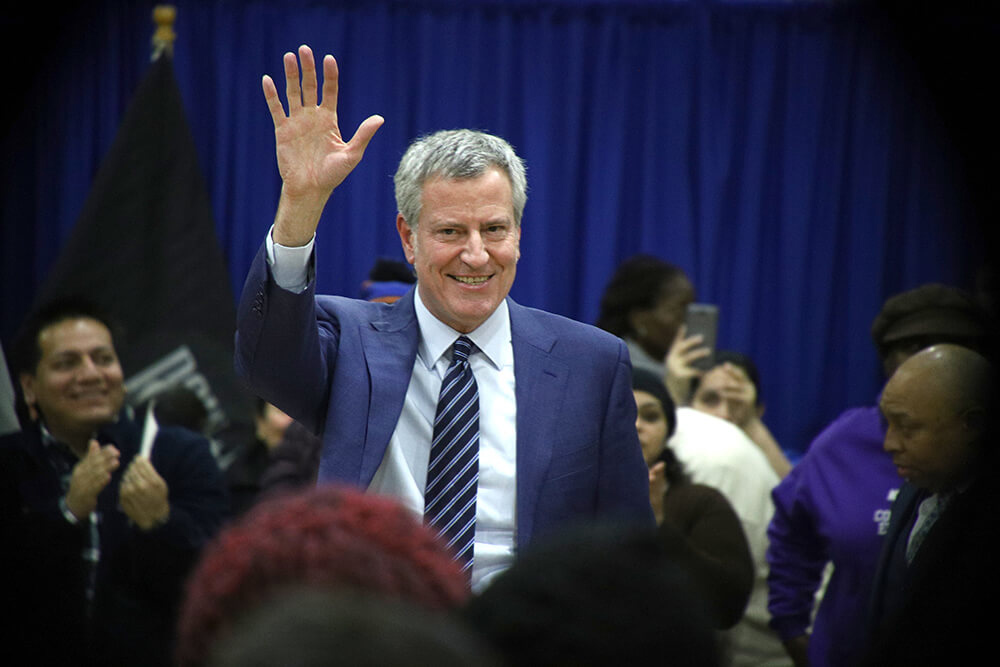 Breaking news!! Warren Wilhelm Jr. is not doing well in the race for the Democrat presidential nomination. Never heard of him? Probably that’s because that was the birth certificate moniker of NYC Mayor Bill DeBlasio, before he changed his name for political purposes. Big Bill’s polling popularity figures are now running in the less-than one percent figure nationally and in his home city, not much higher. He’s the guy who refused to return to the Big Apple from his campaign tour in Iowa, when his home town was hit with a massive blackout last month. And he’s the first mayor in history to have New York’s Finest, the NYPD, turn their backs on him in disgust, when he had the chutzpah to attend funerals for their fallen heroes. To say that he is hated by one and all, even by his Democrat honchos, is an understatement. Hold it….even Governor Cuomo, who proudly brandishes his real Italian name, stomped on Hizzoner with these words: “One of the problems we have in this city is nothing gets done!” Does he mean the decrepit state of apartments? The failure of the city school system? The inept trash and snow removal? You bet! The only things flourishing are the numbers of homeless, traffic jams and the rat population. We mean the little critters that are taking over the city.

On Sunday night, CNN lobbed softball questions at him and to his credit, he did not emulate the lunacy of Biden but instead touted his love of humanity and his plans to run a country of 360 million when his record in a city of a little over 8 1/2 million is tragically a failure….sadly, for its citizens. His wife, Chirlane McCray was handed $850 million in taxpayer money to rehabilitate the city’s already poorly managed mental health program. It’s gone with barely any record keeping to explain its outlay and performance. In response to a Councilman’s request for her evidently non-existent figures, she responded, “We’re talking about people here, not numbers.” Enough said. Hate crimes against Jews perpetrated by blacks are out of control with almost daily accounts of attacks against innocent victims not being investigated. And it’s easy to see why. The Mayor has personally seen to it that so-called “quality of life” (for whom?) offenses like subway turnstile jumping, public urination, public drinking and littering have been decriminalized as part of his social experiment to placate the low-life he caters to. But he does see fit to have a regiment of city cops protect and drive him to his daily workouts in Brooklyn. We call him a total “shmendrick.”

In summation, we call on the Democrat Party to give our Mayor the boot. If the folks in his own home town no longer want him in Gracie Mansion, it would be a horror to think of him sitting in the White House.

The Hard Copy Jewish Newspaper & the Need for its Survival

Is the Gov’t Outsourcing “Censorship” Duties to FB & Google?