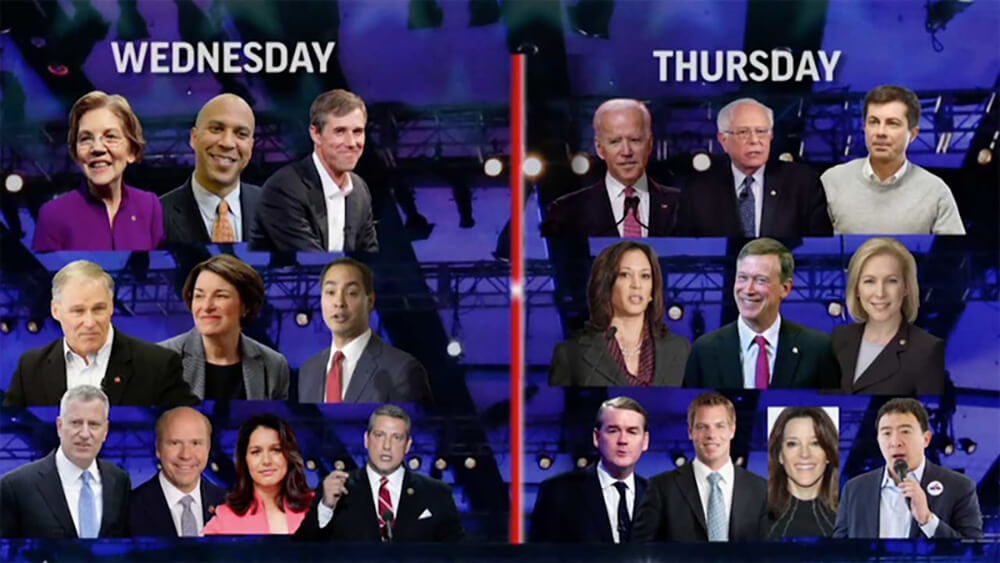 If you thought that the Democrat Presidential debates of June 26th and 27th were difficult to sit through, consider the painful reality that there are 11 more planned, at last count, coming at you through April, 2020. We thought that the candidates, all 20 of them, some of whom may be totally unknown to most of us, would go for Trump’s jugular by lambasting his accomplishments over these nearly 2 1/2 years and informing the public just how they would change them for the better. For instance, how would any of the candidates reduce the current rate of national unemployment which now stands at an all-time low of 3.9% and specifically for blacks, it hit an all-time low of 6.6% in April? Or how to improve on the nation’s annual GDP growth rate of 3.20? There were no instances where the candidates attacked the performance of President Trump. Evidently, they couldn’t and for that reason, the NBC News moderators, who are, for all intents and purposes, a major media outlet for the Democrat Party, steered clear of asking any questions dealing with Trump’s accomplishments.

Rather, the candidates focused on climate change and eliminating all fossil fuels. You could imagine the image of 29-year old AOC looming over the group. They bemoaned the inhumanity of the immigration laws that were passed years ago by a bi-partisan Congress. They now all call for free health care for any including all illegal aliens who criminally cross our border and plop themselves down in our communities. College loans must now be largely forgiven and higher education tuition will, under their administrations, be free. And when Mayor deBlasio declared that taxes must be raised sky-high because, as he said, money is “just in the wrong hands,” you knew that the others kicked themselves because they did not come up with these words of genius, first. So, look for this demand in the next round, thanks to Big Bill.

We were not so surprised that the topic of Israel and the Two State Solution was not brought up either night to be discussed with these left leaning groups of presidential wannabees. Not one of them went on record to condemn or refute Congresswomen Ilhan Omar and Rashida Tlaib as Jew haters when these two Muslim women shamelessly and without hesitation uttered words of hate directed toward Jews and Israel. No repudiation at all from any Democrat, by the way. Rather, their silence made it very clear that they stood solidly behind them. An indication of a major move on the part of the Democrat Party to distance themselves from whatever support they ever evidenced for Jews and Israel. We must consider that they have now moved to embrace the radical Muslims in their party, which includes, as well, Keith Ellison, the current Attorney General of Minnesota and Deputy Director of the Democrat National Committee (DNC).

These debates were disappointing and frightening. The debaters each appeared to be scrambling over one another to prove to be further to the left than his or her platform neighbor. It was painful and excruciating to watch. An indication perhaps, that this party is getting unhinged. Watch for further signs of anti-Israel sentiment emerging from these groups. But keep open the possibility that the American public will come to the conclusion that change is not needed at this point. We Americans are not to be underestimated.

Who Will Be Selected to Replace Biden on the Democrat Ticket???