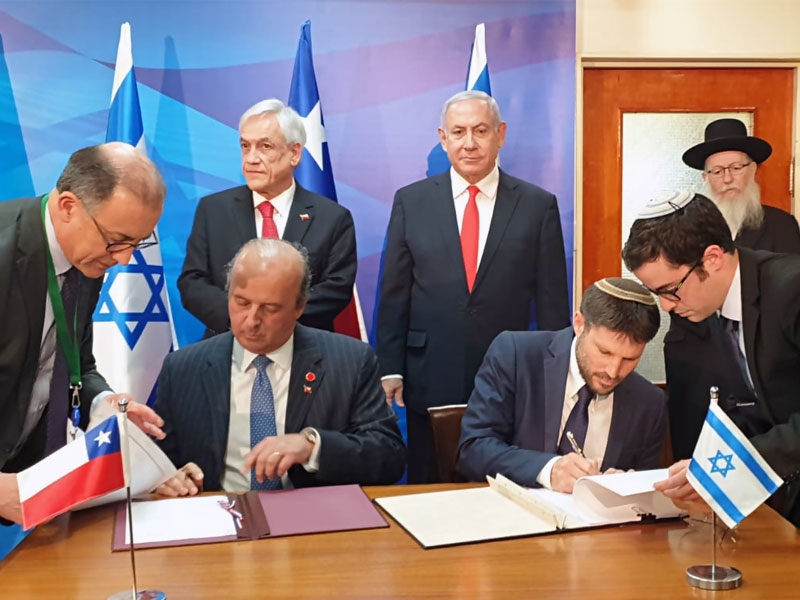 Israel and Chile have signed a new aviation agreement enabling regular flights between the two countries.

The agreement was signed by Minister Smotrich and Chilean Foreign Ministry Director General at the Prime Minister’s Bureau in the presence of Prime Minister Benjamin Netanyahu and Chilean President, who is currently visiting Israel.

Minister of Transport and Member of the Political-Security Cabinet, Bezalel Smotrich, and Chilean Foreign Ministry Director-General Patricio Torres signed a new aviation agreement on Wednesday allowing airlines of both countries to operate regular flights between Israel and Chile via Brazil The agreement was signed in the presence of Prime Minister Benjamin Netanyahu and Chilean President Sebastián Piñera, who is currently visiting Israel.

The aviation agreement with Chile was initialed in 2017 and replaced the previous agreement signed between the two countries in 1982. Today there are three weekly flights on the Santiago – Sao Paulo – Tel Aviv route. The flights are operated by the Chilean airline and are used to fly passengers and cargo between Chile and Israel via Brazil.

Minister Smotrich noted that the agreement signed will help strengthen economic ties between the two countries. According to the agreement, El Al will be able to implement “code sharing” arrangements on non-direct flights between Israel and Chile. As part of the arrangement, the passengers will be able to fly with El Al from Tel Aviv to Madrid and Iberia from Madrid to Santo Domingo.

The new agreement was signed as part of the open sky revolution, enabling the expansion of active flights and the launching of direct flights on new routes. It should be noted that in the past decade, since the open skies were introduced, there has been a 40 percent increase in international passenger traffic at Ben-Gurion Airport, and the prices of flights to Europe and destinations around the world have been reduced by tens of percent.