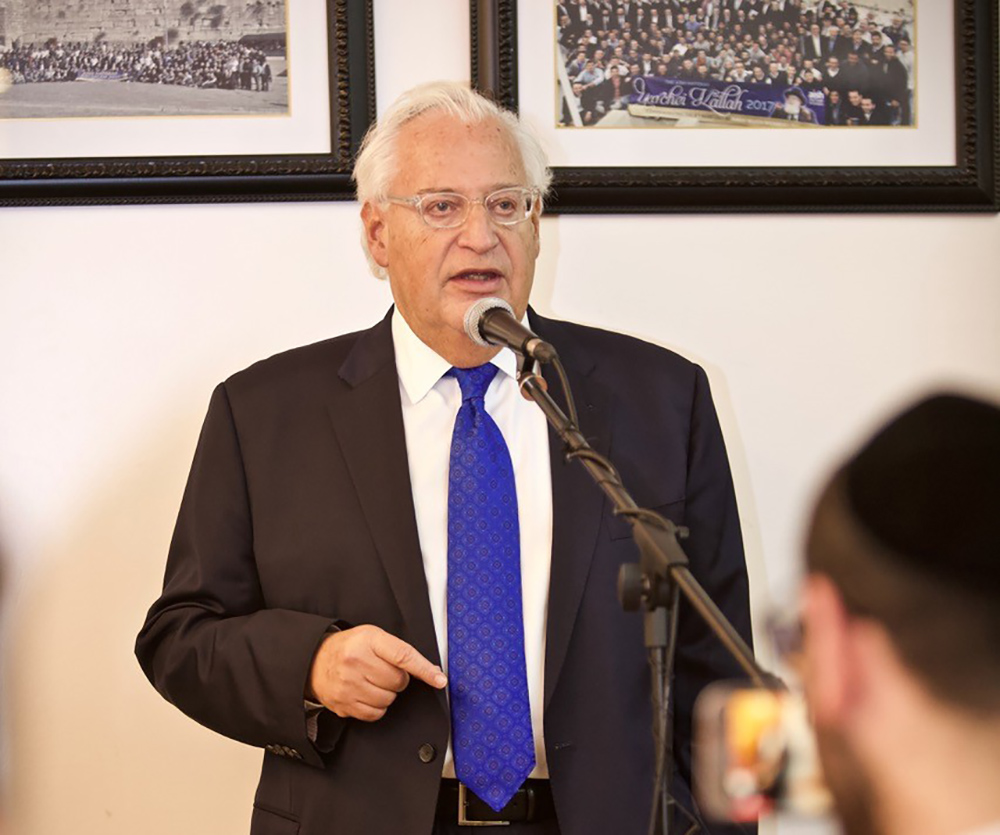 In a commencement speech on Thursday to Yeshiva University (YU)  graduating students, U.S. Ambassador to Israel David Friedman slammed the Obama administration’s treatment of Israel compared to that of the current one.

“Should Israel still negotiate with the Palestinians even though Israel did not steal their land? Of course, it should, precisely because we are not suggesting, as our predecessor did—that Israel return to the bargaining table as a thief returning to the scene of a crime,” he said. “Precisely for that reason, there is a basis for discussion.”

Friedman said “the overwhelming majority of Palestinians are not consumed by hatred nor are unwilling to live in peace. Many are well-educated, many of them want what everyone wants—peace, security, good schools, and a better and more dignified way of life. We need to help them get there—not by perpetual handouts that create a culture of dependency and corruption.”

The ambassador announced that he will be part of next month’s economic summit in Bahrain as part of the Trump administration’s rollout of the Mideast peace plan.

U.S. special envoy to the Middle East Jason Greenblatt is a YU alum.

As was previously reported by the Jewish Voice, the upcoming conference in Bahrain has received fierce pushback from the Palestinians with indications from leading spokesmen that they will not attend.

In a statement issued last Sunday by the White House announcing the upcoming economic workshop to be held in Manama in Bahrain on June 25th and 26th, the conference billed as “Peace to Prosperity” will serve as a “pivotal opportunity to convene government, civil society, and business leaders to share ideas, discuss strategies, and galvanize support for potential economic investments and initiatives that could be made possible by a peace agreement.”

According to the White House, the “Peace to Prosperity” forum will facilitate discussions on an ambitious, achievable vision and framework for a prosperous future for the Palestinian people and the region, including enhancements to economic governance, development of human capital, and facilitation of rapid private-sector growth. If implemented, this vision has the potential to radically transform lives and put the region on a path toward a brighter future.

“I look forward to these important discussions about a vision that will offer Palestinians exciting new opportunities to realize their full potential. This workshop will engage leaders from across the entire Middle East to promote economic growth and opportunity for the people in this important region,” said United States Secretary of the Treasury Steven T. Mnuchin.

Saeb Erekat, secretary general of the Palestine Liberation Organization said,.“We were not consulted by any party on the announced meeting to take place in Manama, Bahrain. We have not mandated any party to negotiate on our behalf.

He added that, “Attempts at promoting an economic normalization of the Israeli occupation of Palestine will be rejected.”

The Palestinians, who severed ties with the United States more than a year ago, have repeatedly expressed fears that the White House would try to buy them off with large sums of investment in exchange for freezing their demands for an independent state. They have also expressed concerns that Washington is trying to rally support from other Arab countries to pressure them into accepting a plan they see as unacceptable.

“There will be no Palestinian participation in the Manama workshop,” Majdalani, who is also a member of the executive committee of the umbrella Palestine Liberation Organization (PLO), told Reuters news agency.

“Any Palestinian who would take part would be nothing but a collaborator for the Americans and Israel.”

On that note, the Times of Israel has reported that Bashar Masri, a Palestinian industrialist with vast business holdings throughout Judea and Samaria, has said he had turned down an invitation to the conference.

“I will not participate in this conference, and none of the representatives of our companies will participate,” he wrote on Facebook. “We reaffirm our clear position: We will not deal with any event outside the Palestinian national consensus.”