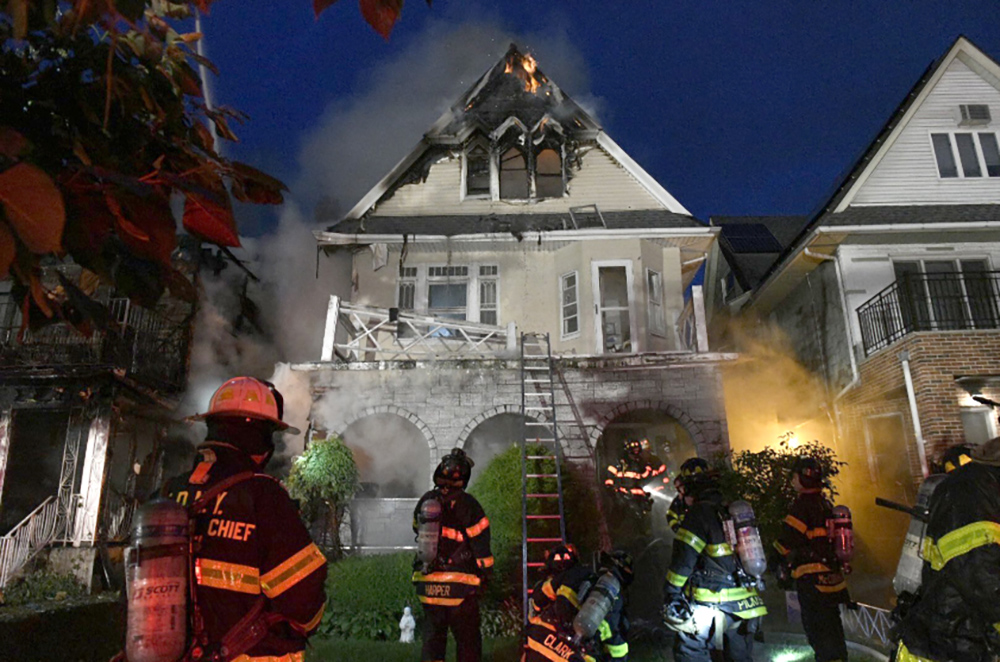 The 41-year-old man accused of torching a Brooklyn rabbi’s home in the Midwood section last Thursday morning was reported to have harbored a visceral hatred of his target. Rabbi Jonathan Max, a beloved rebbe and rabbinic figure at the famed Chaim Berlin yeshiva was his intended victim. The New York City police department arrested Matthew (Menachem) Karelefsky, of McKeesport, Pennsylvania on Sunday and charged him with arson and two counts of attempted murder.

The story took a dark and ominous twist when it was reported that Karelefsky had a tattoo on his arm that read, “Never let go of the hatred – KILL Rabbi Max YEMACH SHMO.” The words Yemach Shmo in Hebrew are generally reserved for cruel enemies of the Jewish people such as Adolf Hitler and other bombastic miscreants that have sought to annihilate the Jewish nation.

It appears that Karelefsky and Rabbi Max had shared a friendship at some point, but Karelefsky has assigned blame to the rabbi for the dissolution of his marriage. He had also accused the rabbi of sexually molesting him, however nothing could be further from the truth, according to published reports.

A 3000-word screed that Karelefsky posted in 2016 focused on his own deviant sexual practices and his desire to throw his own son in front of a bus. The post was unearthed on the suspect’s Facebook account by the NY Post. Moreover, Karelefsky, had accused Rabbi Max of sexually molesting him. In his personal rantings Karelefsky never mentions being molested, but elsewhere in a Facebook group claims to have converted to Christianity because of the purported molestation. His claims and accusations against Rabbi Max have absolutely no veracity and are essentially total fabrications.

According to the NY Post report, the suspect admitted that he is addicted to “drama” and conflict”. Karelefsky has been described as mentally unstable in various media accounts and by neighbors. He craved attention and liked to threaten to kill himself online to gain the attention that he desired, according to the New York Post report.

The NY Post reported that Rabbi Max said, “Fundamentally he (Karelefsky) feels that I cheated him — that he thought so highly of me and I turned on him,” Max said. “Somehow, he understood that I was a key figure — of which he was terribly mistaken. I was the one who told him not to divorce.”

Karelefsky and wife Inna divorced shortly after August 2010, according to the post on social media which was not accessible Sunday.

“To bring you many years ahead, in 2012 I purposely wrote on Facebook that I was going to slit my wrists. I WANTED to be caught by the police and be brought to the mental hospital,” Karelefsky wrote.

On Tuesday, it was reported that a resident of Pittsburgh’s Squirrel Hill neighborhood told Pittsburgh’s Action News 4 that Karelefsky had told him what his intentions were six days prior to the attempted murder of Rabbi Max.

“He wouldn’t stop talking about wanting to kill Rabbi Max. And I knew that he had been in trouble about these threats before,” Robert Willis told Pittsburgh’s Action News 4.

The suspect almost stood trial two years ago in Allegheny County. Pennsylvania for threatening to kill the rabbi, but a judge dismissed the charges on which had been held for trial, according to the Pittsburgh news report.

Willis said Karelefsky told him he was “working on himself emotionally” in preparing.

“I said to him, ‘Let me get this straight, you’ve been working on yourself emotionally, not to become less homicidal, but to become more homicidal?’ and he said ‘Yes.’ He said he was working up the nerve to someday, sooner or later, kill Rabbi Max,” Willis told Pittsburgh’s Action News 4.

“He kept referring to the tattoo on his arm. He told me that he told the judge when he had been in court before that he still was going to go through with this homicide some day. I couldn’t understand why he wasn’t locked up,” Willis said, according to the Pittsburgh Action News 4 report.

Willis said he reported his conversation with Karelefsky to Allegheny County 911 but never heard back from Pittsburgh police.

Karelefsky was scheduled to stand trial in Pittsburgh in 2017 for terroristic threats to kill Max, according to the Pittsburgh Action News 4 report. Allegheny County Judge Randal Todd, however, ruled that because police couldn’t prove the defendant was in Pittsburgh when he posted the threats on Facebook, he could not be tried here for the alleged crime.

“The victim resides in the state of New York, not Pennsylvania. The Commonwealth is unable to prove where the defendant was and from what device these threats were sent. This court lacks subject matter jurisdiction. The venue for this matter should be where the victim resides within the state of New York,” wrote the judge in his order dismissing the case. He wrote that his order was granted “without prejudice to be refiled within the proper venue.”

Pittsburgh Public Safety has responded that Pittsburgh police have been in “constant contact” with Brooklyn police about Karelefsky for more than a year.

“Detective Donald Pasquarelli (who filed the 2017 criminal complaint) and others from the Pittsburgh Bureau of Police have been in constant contact with detectives in New York since it was discovered that Rabbi Max was Matthew Karelefsky’s target more than a year ago. They have shared information back and forth the entire time,” wrote Cara Cruz, assistant public information officer with the Department of Public Safety, in an email to Pittsburgh’s Action News 4.

Willis said he’s known Karelefsky for a decade or more and had crossed paths with him in Pittsburgh’s Oakland neighborhood late on the evening of June 7, according to Pittsburgh’s Action News 4. Willis told the Pittsburgh media outlet that he made the call to 911 around 4 a.m. June 8, after first consulting a crisis hotline, which advised him to notify police.

The massive blaze that Karelefsky ignited in this twisted and grotesque rage leapt to two neighboring buildings and left 13 people injured. Last Thursday it was reported that Chief of Fire Operations Thomas Richardson said more than 170 firefighters and EMS personnel were on the scene at 1488 East 17 Street near Avenue N in the Midwood section of Brooklyn within 5 minutes and found three homes on fire at 4:05 am.

“They did make an interior attack into the main fire building, but they quickly had to evacuate that building, and we concentrated our efforts on the two exposures,” Chief Richardson said, according to a CBS News report.

Over a dozen civilians, including a 6-week old infant, were injured, along with three firefighters and two police officers. Most of them suffered smoke inhalation and were listed last week in stable condition. They’re all expected to survive.

Highly credible sources confirmed on Thursday afternoon to Yeshiva World News that NYC fire marshalls were in possession of security camera footage of an individual seen running from the fire just as the fire started.

YWN reported that there was additional footage showing the home literally bursting into flames – pointing to the fact that an accelerant was used.

CBS News reported that surveillance video from a nearby home shows a man pouring what is believed to be a flammable liquid beside a parked car, sources say. Investigators believe he was burned when the fire began and ran away.

Additionally, YWN is aware that authorities are investigating recent threats that were made to the home owner. Thankfully, all homes had working smoke detectors, and no one was seriously injured or killed, according to the Yeshiva World News report.