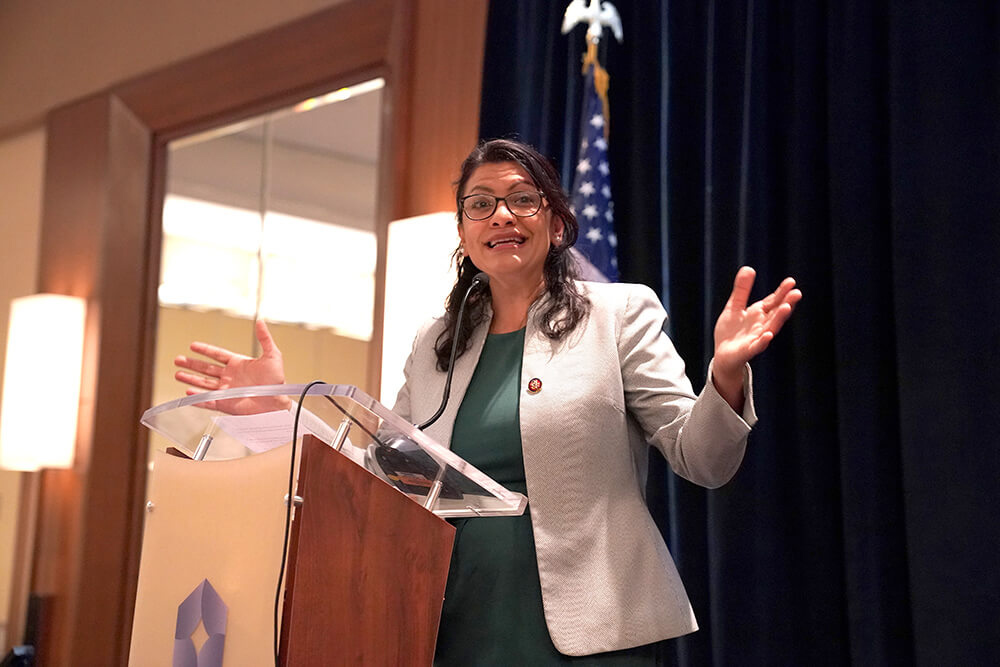 Last week, Congresswoman Rashida Tlaib claimed that she thought it was her Palestinian ancestors who provided a “safe haven for Jews.” According to a report, she claimed that while Palestinians had “lost their land and some lost their lives,” it was done “in the name of trying to create a safe haven for Jews, post-Holocaust, post-tragedy and the horrific persecution of Jews across the world at that time. And I love that it was my ancestors that provided that in many ways.” One problem. That’s the opposite of what happened.

As the Nazi persecution of the Jews was seeking to deprive them of their rights, after the 1935 Nuremberg Laws and the Kristallnacht pogrom in 1938, the Palestinian Arab revolt in British Mandate Palestine led to restrictions on Jewish immigration. At precisely the time when Jews needed a safe haven, it was taken from them by the British authorities – and due in large part to Palestinian Arab opposition to Jewish refugee immigration.

The 1939 White Paper, created that May by the Secretary of State for the Colonies, was a response to three years of the revolt in Palestine led by Mufti Hajj Amin al-Husseini. It began in May 1936 and was not fully defeated until August 1939. The White Paper limited Jewish immigration to 75,000 people in five years, precisely the years of the Holocaust.

The British couldn’t have known this at the time but they would have known that the MS St. Louis had left Hamburg on May 13, 1939, with Jewish refugees seeking to flee Germany. The ship was prevented from letting its refugees off in Canada and the US, and 254 of the refugees were murdered by the Nazis. In fact, the boat was forced back to Europe in June and the UK took 288 of its 900 passengers.

So the UK was keenly aware of the Jewish refugees fleeing Europe. But the UK wanted to placate the Palestinian Arab rebels as the war clouds gathered in Europe. The White Paper was the response. The problem with Tlaib’s characterization of Palestine as a “safe haven” is that the reality was that Jewish immigrants and refugees were not welcomed or provided a safe haven in the country. Instead, they faced consistent harassment and massacre.

In April 1920, Husseini, the same one who led the Arab Revolt in the 1930s, used the occasion of the religious procession of Nebi Musa to instigate riots against Jews. The British concluded that the riots were due to “Arab disappointment at non-fulfillment of the promises of independence” and “Arab belief that the Balfour Declaration implied a denial of self-determination.” The November 1917 Balfour Declaration had been issued by the British with promises to help create a national home for the Jewish people in Palestine.

In August 1929, more riots across British Mandate Palestine led to the murder of 133 Jews, including the massacre of Jews in Hebron. These were also incited by Husseini, who had given out pamphlets claiming there was a Jewish conspiracy to take over al-Aqsa Mosque. This was not a “safe haven,” but a butchering and persecution of ancient Jewish communities in places like Hebron. It was not opposition to “Zionism,” but the purposeful targeting of the most vulnerable and indigenous Jewish communities.

Far from being a safe haven, the British interned Jewish refugees in camps in Palestine. At Atlit, one of the many internment camps for Jews, can still be seen. It is thought that 122,000 Jews were able to flee through the British blockade to Palestine, but many thousands ended up in camps like Atlit. They were sprayed with DDT, which harmed their health.

The British even sought to deport Jewish refugees who were able to make it to other countries. For instance, they tried to send 1,800 Jewish refugees fleeing Nazi Europe in 1940 to Mauritius aboard the ship Patria and another ship named Atlantic. This was not a “safe haven” but a brutal treatment meted out to the weakest and most vulnerable people who had risked everything trying to flee Hitler’s Europe. At a time when Jews desperately needed to leave, not only were the doors of Western countries closed to them, but also those of Palestine and other areas in the Middle East.

Husseini, the Palestinian Arab leader, had fled British Palestine by this time and ended up briefly in Lebanon and then in Iraq. In Iraq, he supported the extremist nationalism that led to the Rashid Ali coup and the attacks on Jews known as the Farhud, in which hundreds of Jews were killed. Later, Husseini was able to get to Hitler’s Europe, where he supported the Holocaust.

There were Palestinian Arab leaders who sought reconciliation and coexistence. Fakhri Nashashibi, who was assassinated by Husseini’s agents, had good relations with Jews in British Palestine. His funeral was attended by Sephardi Chief Rabbi Ben-Zion Meir Hai Uziel, Yitzhak Ben-Zvi, Moshe Shertok and former Jerusalem mayor Daniel Auster. But in general, the voices that might have created a safe haven were either drowned out, ignored or assassinated by extremists.

Saying ” All Lives Matter” Can Get You Fired From Your Job or Killed !!

Rushing into the future that has no past