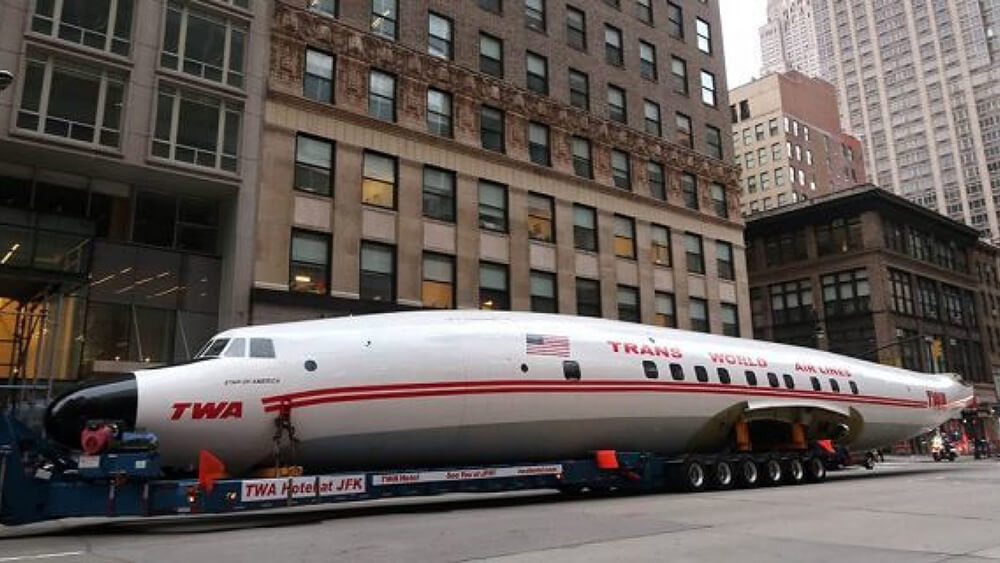 The latest Times Square attraction is something from the past and for the future.

On Saturday, a vintage TWA plane was displayed in Times Square. The 116-foot-long plane will stay only for a limited time, as its next destination is to be transformed into a cocktail lounge at the former TWA terminal at Kennedy Airport. As reported by CBS News, it is just visiting Times Square until Sunday night, as part of an upcoming documentary about the redevelopment of the national landmark, TWA Flight Center, into a modern 512-room hotel. The hotel will be a tribute to Eero Saarinen’s TWA Flight Center opened in 1962, and shuttered in 2001 when TWA was bought by American Airlines.

The fuselage, or the aircraft’s central body, belongs to the 1958 Lockheed Constellation. The aircraft arrived in New York in November from Maine, where it was restored. The vintage plane was driven in by truck from Kennedy Airport into Times Square on Saturday night. Interestingly, in the late 1950s, this model airplane was featured on an eight-story billboard in Time Square.

Last year, the plane was purchased by MCR/MORSE Development, the developers of the upcoming TWA Hotel. The company partnered with Atlantic Models /Gogo Aviation to restore it to its original condition, which included getting authentic parts, installing flooring and windows, and equipping the cockpit with controls.

The Constellation, known as Connie, primarily flew for TWA for merely three years before it began early retirement, being replaced by the Boeing 707. “We’re trying to recreate the theater of the hotel and make it a special experience,” said MCR’s CEO, Tyler Morse. “This plane became an Alaskan bush plane for about a decade and then it ran drugs through South America for 10 years and they put a cargo door in the side so they could drop the weed and kick it out of the plane as they were flying low and slow over Latin America,” continued Morse, telling the plane’s historical background.

The TWA hotel is slated to open on May 15, 2019, and has already begun taking reservations as of February. It will be the only accommodation directly on airport grounds, and accessible by Air train. The hotel will have a total of 6 restaurants and 8 bars, a 10,000-square-foot rooftop observation deck with pool, a 10,000-square-foot fitness facility, 50,000 square feet of event space, and a Museum devoted to the Jet Age. The hotel rooms boast floor-to-ceiling, full-width windows specially made using Fabbrica, the ultra-thick glass wall, to cancel runway noise. Each guest room will be furnished with Saarinen’s classic midcentury modern furniture by Knoll, topped off with a Vintage Rotary Phone.