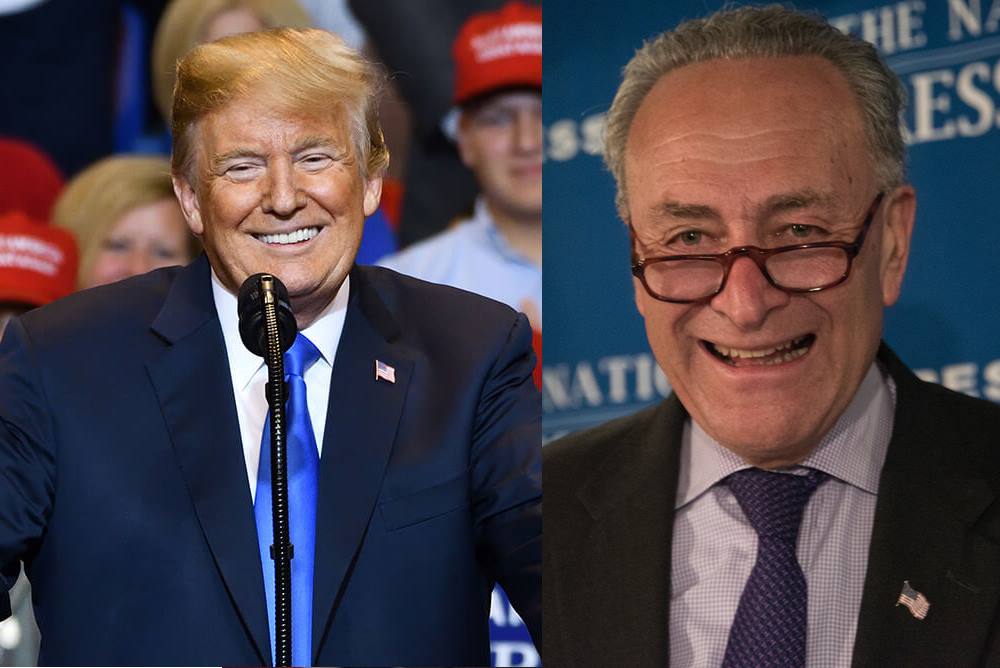 Senate Minority Leader Chuck Schumer fired back at President Trump, after he said on Friday that the Democratic party has become an “anti-Israel” and “anti-Jewish” party.

“For the president, who when neo-Nazis marched in Charlottesville in front of a synagogue and said ‘burn it down’ and he said ‘both sides’ are to blame, this is a new divisive low,” wrote Schumer on Facebook.

“His comments show the president is only interested in playing the politics of division and not in fighting anti-Semitism. Mr. President, you have redefined chutzpah,” added Schumer.

Trump’s comments on Friday came after the House of Representatives passed a broad resolution that called out bigotry of all kinds without directly condemning Rep. Ilhan Omar (D-MN) over her anti-Semitic remarks.

Trump added that most lawmakers would agree that the resolution, which did not mention Omar name, was a disgrace “if you get an honest answer.”

The final vote on the resolution was 407 to 23—with 23 Republicans voting no, and all Democrats, including Omar, voting yes.

The resolution originally condemned anti-Semitism but was rewritten and its final draft was expanded Thursday afternoon to condemn all forms of bigotry, including white supremacy. Republicans characterized the watering down of the resolution as a ploy to distract from
Omar’s remarks which had prompted the resolution in the first place.

Omar’s suggestion that Jewish or staunchly pro-Israel members of Congress have a dual loyalty to the United States and to Israel came on the heels of remarks she tweeted earlier this year regarding the influence of the American Israel Public Affairs Committee (AIPAC), a highly influential, pro-Israel lobby. Invoking a trope about Jews and money, Omar suggested that AIPAC members used generous contributions to influence lawmakers’ policy decisions on Israel.

She subsequently issued a half-hearted apology before ultimately deleting the controversial tweets.

During her campaign last year to become one of only two Muslim-American women elected to Congress, Omar also apologized for the anti-Semitic implications of some of her Tweets and remarks.

A resolution specifically condemning anti-Semitic speech in response to Omar’s Tweet regarding AIPAC and the influence of money in advancing pro-Israel policies in Congress passed the House last month.

This week she caused another uproar when, at a public event, she appeared to refer to domestic support for Israel as “allegiance to a foreign country”.

Omar had previously tweeted in 2012 that “Israel hypnotized the world, may Allah awaken the people and help them see the evil doings of Israel.” Omar subsequently apologized for her comments and deleted the tweet.

Omar’s comments exposed deep divisions within the Democratic caucus in terms of religion, race and age that have frustrated House Speaker Nancy Pelosi’s efforts to move ahead with the Democrats’ political agenda. Her remarks have also highlighted a generational clash between more establishment Democratic leaders and new members such as Omar and Representatives Rashida Tlaib of Michigan and Alexandria Ocasio-Cortez of New York. Those newcomers have not hesitated to start spirited debates over everything from climate change to impeaching Donald Trump. Traditionally, freshman members of Congress are expected to keep a low profile their first months in office. (INN)

Share
Facebook
Twitter
Pinterest
WhatsApp
Previous articleNew Einstein Manuscripts Revealed; Sheds Light on the Man Behind the Science
Next articleMore than 1,500 rally in Bulgaria’s First Ever March for Tolerance and Unity in Face of Neo-Nazis